Time to take a look at the last part of season 3 of X-Men.  Season 3 goes out on an uneven note, though at the time  no one really knew the season was over.  Really, no one knew when it began as new episodes were aired some-what randomly.

“Sanctuary” marks the return of one of comics’ greatest villains; Magneto.  In true Magneto fashion, his motives aren’t particularly villainous as he seeks to create a haven for mutants where they will be free from human persecution.  Feeling no place on earth would suit his needs, he creates his haven on an orbiting asteroid he dubs Asteroid M.  This attracts the attention of all the world’s nations as Magneto had to abduct a Soviet shuttle crew to aid in the construction.  There’s also the small matter of the nuclear weapons he possesses as well.  Magneto crashes a UN meeting and interrupts a discussion surround him.  There’s a piece of dialogue where the Genoshan rep rejects the term slavery as it applies to Genosha and refers to mutant powers as natural resources.  An interesting take. 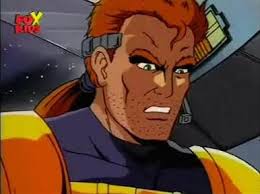 You will hate this man by episode's end.

The plot is a condensed version of the one from the comics that began in X-Men 1 and concluded in the Fatal Attractions mini-series.  Though what took place over years takes place over two episodes here.  Magneto finds himself placing much trust in his new acolytes and a young mutant named Fabian Cortez in particular.  Cortez betrays him and attempts to kill Magneto by ejecting his quarters from the asteroid and in doing so frames the X-Men.  In their escape, Gambit gets left behind and Wolverine, Beast, Rogue, and Xavier (in Shi’Ar battle-suit, though he doesn’t use it to walk for some reason) go after him.  From there it’s a fairly predictable plot as Magneto returns and rights what is wrong, only to see Asteroid M get destroyed in the end, but the ride is a fun one.

A side plot between Xavier and Acolyte Amelia Voght sheds some light on Xavier’s past and how he became paralyzed.  The two were lovers whose differing views on how mutants fit into society eventually drove them apart, and Voght to Magneto.  She’s not a love interest or anything for Magneto (he’s not interested in Chuck’s sloppy seconds) but serves him loyally as one of his Acolytes.  She plays a role in uncovering Cortez’s treason and ends up helping the X-Men.

The end of the episode contains a teaser (apparently for the “Beyond Good and Evil” mini series to come) where Apocalypse finds Cortez drifting through space.  Deathbird is also pictured with him.

“Sanctuary” contained some interesting back story on Charles Xavier and an episode implying an origin story for him was a welcome development.  Unfortunately, that’s not what this episode contains.  Instead we’re “treated” to the return of the Shadow King, the worst villain the show would know.

If you have been keeping with up this feature, you will know that the season 2 episode “Whatever It Takes” is one of my least favorite episodes.  In fact, it’s in the running for first episode of X-Men.  “Xavier Remember” might be even worse, though it’s so close it matters little.  This one serves as the origin for the Shadow King and how he came to be imprisoned in the Astral Plain.  Xavier defeated him there when encountering him in Cairo, and he’s used a piece of his own mental capacity to keep him there for decades.  A concussion causes Xavier to lose his hold and it’s up to Jean to enter the Astral Plain, find Xavier, and secure the Shadow King.

The Astral Plain is incredibly boring, both visually and thematically.  It’s also just too “out there” for me to take seriously.  The only plus I can give this episode is that it’s the last we see of the Shadow King.  Stay away Shadow King, forever. 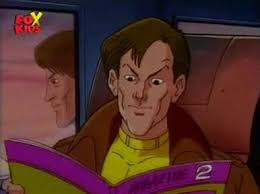 What’s a good way to rebound from one the series’ worst episodes?  Bring back a fan-favorite who’s been missing from television for over a year and half!  I don’t know why Morph became such a popular character.  Maybe it’s because we all collectively just felt bad for him because he died so quickly into the series.  I do know that I love him, and his episodes were among the best.

“Courage” is the much teased and long-awaited comeback for Morph (now sporting brown hair for some reason) as he finally rejoins the X-Men.  Morph can’t catch a break though, for his return to the X-Men just happens to coincide with the return of the Sentinels, the mutant hunting robots responsible for his “death.”  Morph reacts predictably when confronted by his killers, which is to cower in fear and cry.  That’s okay though, he’s Morph so we forgive him and the X-Men don’t seem that upset his cowardice caused them to lose Xavier.

Turns out, Master Mold survived Xavier’s kamikaze attack in “The Final Decision.”  Sure he’s just a head now, but he’s also crazy and wants revenge.  After his Sentinels capture Xavier, the X-Men track him down but leave Morph behind.  Morph though won’t stay put and arrives in time to save the day doing awesome Morph things.

The only negative about this episode is that, in the end, it turns out to be one big tease as Morph decides he’s just not quite ready to return full-time.  Wolverine is understandably upset, as we all are, and Morph goes back into hiding until the final episode of the series.

“Whatever It Takes” and “Xavier Remembers” are both bad episodes, but “Secrets, Not Long Buried” gets my vote as worst of the worst.  This episode is just boring.  Cyclops goes off to some mutant town in the middle of no where to give a present to his former headmaster and finds him missing.  Cyclops is the dullest member of the X-Men, and his solo adventures just don’t work very well.  I actually hate this episode, I hate everything about it.  I can’t even think of one good thing to say about it.  It sucks, don’t watch it.  Just pretend season 3 ends with “Courage.”

This entry was posted on Friday, August 5th, 2011 at 6:04 pm and posted in Comics, Television. You can follow any responses to this entry through the RSS 2.0 feed.
« X-Men Season 3 (Part 2)
The Legend of Ganondorf »