Episode 53 brings us to a much more grounded place than the previous episode, the supernatural “Mudslide.” It’s also a much more conventional and relatable story that feels like it would have been right at home on a prime time drama as opposed to a week day afternoon children’s program. It’s an episode the takes a broader look at two people in Batman’s life who have impacted him in two very different ways:  Dr. Leslie Thompkins and the gangster Rupert Thorne. This episode is also noteworthy as it was the final aired episode of season one, even though by production order there were still a dozen left.

Batman with the only doctor he trusts.

The episode opens rather conventionally though, with the heist of an armored car. The episode immediately earns bonus points by having the heist conducted in a unique manner. An ambulance pulls up alongside it, and thinking it’s an emergency vehicle, the armored car pulls over to let it pass only for the drivers of the ambulance to pull out guns. The crooks manage to knock off the armored car fairly easily, so easily in fact that they’re positively delighted by their effort, until Batman shows up. This isn’t the type of thing one gets away with in Gotham City very easily.

Eventually the ambulance crashes, and the crooks are forced to take Batman on the old-fashioned way where they will undoubtedly be at a disadvantage despite their numbers and weapons. That seems to be the case at first, until one of the crooks produces some kind of surgical laser gun that was in the ambulance and takes aim at Batman. He’s able to graze the cowl of the caped crusader causing Batman to tumble off a bridge and land on a cable car below. The crooks, thinking they’ve off’d the Batman, take off to see their boss, Rupert Thorne (John Vernon).

Matt and Rupert have a complicated relationship.

Thorne is on his way to visit his doctor, a doctor that specializes in treating criminals. It turns out, that surgical laser was part of the heist and Thorne intended to give it to his doctor, Matthew (Joseph Campanella), who just so happens to be Rupert’s younger brother. Matthew appears to be dissatisfied with his lot in life. The two, apparently self-aware about their audience, somewhat clumsily rehash what got them here. Apparently years ago Matthew was a respected physician, but when he failed to report that he removed a bullet from his brother to the police he subsequently lost his license to practice medicine. As a result, he’s now an unlicensed doctor who only treats his brother and associates of his brother and, while he’s probably paid pretty well, it’s not the kind of life he envisioned for himself. Rupert, feeling he’s more than paid his debt to his brother with his finances, feels no sympathy for Matthew and the two get into an argument. The argument ends when Rupert, clutching his chest, collapses before him.

Batman also has problems of his own. That laser did a job on him, and he seeks out the only person he trusts – Leslie Thompkins (Diana Muldaur). He collapses upon reaching her, but she’s able to treat him. She diagnoses him with a concussion and prescribes rest and some medication, even though she knows he’s unlikely to follow her orders.

After having collapsed, Matthew is forced to X-Ray his brother. He discovers a tumor that he believes to be benign in his brother’s chest. However, even though he doesn’t believe it’s cancerous the tumor does appear to be pressing against Rupert’s aorta restricting the blood flow to his heart. It needs to be removed, and Matthew insists Rupert go to the hospital and have the surgery done there. Rupert, fearing what his enemies would do should they find out he’s in for surgery, refuses and insists that Matthew perform the operation. Matthew says it’s impossible for him to do it alone, so they explore other ways to pull it off. 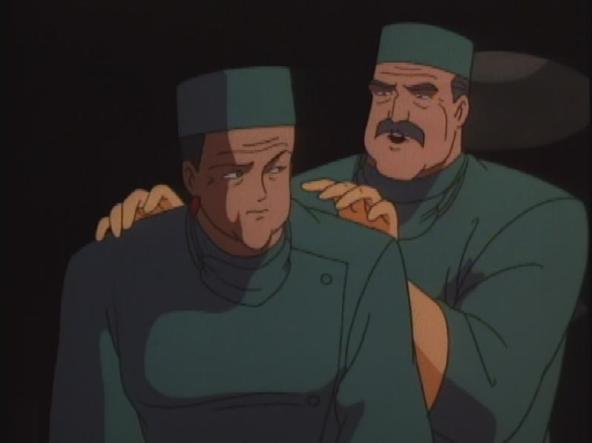 Matt tries to be a nice guy, but there’s no making up for his creep-like behaviour.

That night, Leslie is paid a visit at her clinic as she’s closing up shop for the night. Three sketchy looking individuals barge in, and just as she’s preparing to fight them off, one of them reveals himself to be Matthew. It turns out Leslie and Matthew attended medical school together, along with Thomas Wayne. Unfortunately for Matthew, Leslie knows all about his past and how he lost his license. He explains the situation he’s in and asks her to assist in performing the operation on his brother. He offers money, but Leslie refuses knowing it’s dirty money. She won’t do it and risk her own license, forcing the other gentlemen with Matthew to get grabby. They take her back to Thorne’s where she is forced to assist in the operation. Matthew tries to thank her, even though she’s not there willingly, but she’ll have none of it. She warns him not to trust his brother, for there’s virtually no chance he’ll be able to get his license back.

Batman has done some investigating and is able to trace a fabric sample at the crime scene from earlier back to Rupert Thorne. It’s a bit of a stretch, but we’ll go with it. Batman is confused about what Thorne would want with a medical laser, and decides to pay Leslie a visit once more, this time as Bruce Wayne and with Alfred at his side. They find the place a mess and Leslie is no where to be found. A picture of Leslie and Thomas Wayne gets their attention. It was one Matt had handled for he was the photographer. Bruce checks behind the frame to see a message Matt left for Leslie on it. He turns to a yearbook and is able to find a Matt who signed the book for his father and Bruce takes note of that tell-tale last name:  Thorne.

Matthew and Leslie were able to successfully remove the tumor. As they clean up and prepare to part, they soon find out Rupert left his thugs with instructions to kill Leslie once the job was done. Batman shows up, but still reeling from the earlier concussion, finds it tough going against one of the orderlies. Matthew, meanwhile, is not onboard with murdering his old classmate and he and Leslie make a break for it. He first tricks one of the men by saying he’ll give Leslie an injection that will kill her, quick and painlessly. Instead he uses it on the goon which knocks him out. Leslie acts surprised, but Matthew insists he’d never stoop so low as to murder someone just to get his license back. 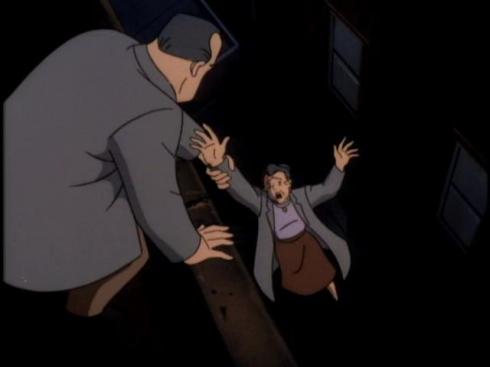 Because we need to see Matt do something heroic.

Another thug takes note of them, forcing Matthew and Leslie to flee to the roof of the building. Matthew jumps to an adjacent rooftop, but Leslie is less confident in her ability to do the same. She eventually does, but comes up short. She still manages to grab the ledge of the next building and Matthew springs into action. Unfortunately, this leaves them wide open for one of Rupert’s thugs to take them out. Fortunately, Batman makes it to the rooftop in time to prevent the thug from doing the worst, but Matthew loses his grip and Leslie falls. Batman is able to shake off the concussion-like symptoms to make the save and the police are able to take care of the rest.

“Tell me about my father.”

The episode shifts to prison where Matthew is led into a meeting room. Bruce Wayne is here for a visit, and Matthew doesn’t seem thrilled to see him. Bruce offers legal help, but implies it’s in exchange for a favor. Matthew, agitated and smelling a blackmail, insists he’s done doing that sort of thing and prepares to leave. Bruce stops him though and insists he’s not asking for anything illegal, and in a heartbreaking moment, he simply asks Matthew to tell him about his father. Matthew immediately softens, puts an arm around Bruce, and leads him back to the table for what was likely a long and pleasant discussion.

“Paging the Crime Doctor” is another Batman melodrama where a good person is caught between two opposing forces, crime and justice, with their family being on the side of crime. Matthew, largely due to partaking in the scheme to abduct Leslie, doesn’t come across as entirely in the right. He’s clearly made bad choices, and even though it’s understandable he’d want to help his brother, it’s not exactly an excuse. Like all good melodramas, he eventually is forced to choose between right and wrong and ultimately makes the right call. It feels like a small stakes episode as far as the main plot is concerned, but it does lead to that very poignant moment at the episode’s conclusion with Bruce and Matthew. That scene is done perfectly. The voice acting, the mannerisms of the characters within the animation, the setup making it seem like Bruce is indeed after something Matthew might not be interested in, and then the cut to Bruce’s grief-stricken face. It’s simple, but it’s perhaps the most touching scene in the show’s history.

What can I say? The sweet ending worked on me.

As far as lasting implications, there are virtually none. Rupert Thorne will be back to a life of crime in no time, strong as an ox. Meanwhile, Matthew is never heard from again. He presumably did some time, but probably not a lot, especially if he ratted on his brother. He likely never got his license back, but at least he saved his soul. We’ll also see Leslie again fairly soon, but it will be her final appearance of the show.