Batman: The Animated Series – “The Forgotten” 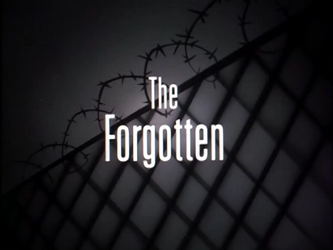 A simple premise, what would Bruce Wayne do if he forgot he was Batman, turned into an episode. “The Forgotten” takes Batman out of his element and forces him to rely on his own skills as a fighter and lean heavily on his own instincts and moral code. It also gives us a deeper look at Alfred and his ability to function as a sidekick to Batman and show off his own detective skills. It’s also another episode without a traditional Batman villain, settling for the one-shot Boss Biggis as the main antagonist who will never re-appear (hence why I didn’t bother mentioning this as his first appearance).

The episode opens with Bruce volunteering at a homeless shelter. He learns some familiar faces have been disappearing and the police do not have the manpower to look into why homeless men are suddenly no longer around. Bruce decides to investigate, but not as Batman, but as Griff – the homeless guy! It’s while nosing around in his disguise that Bruce gets jumped by some men who at first appeared to be offering work. Distracted by a cat (foreshadowing future encounters, perhaps?), Bruce ends up getting walloped on the back of the skull and wakes up in a weird camp with no memory of who he is. 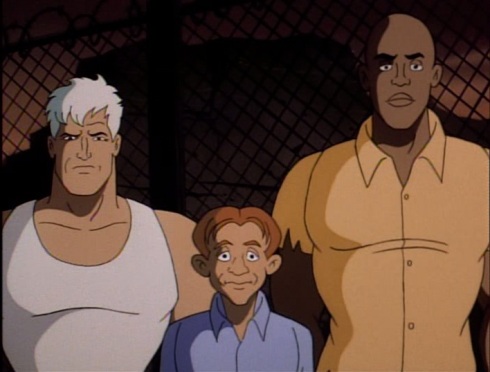 The camp is basically a slave camp, and Bruce befriends two men:  Riley (Dorian Harewood), a steel worker who was a fellow volunteer, and Salvo (Lorin Dreyfuss), just some homeless guy down on his luck. All of the men in this camp are the prisoners of Boss Biggis (George Murdock), an obese man with no regard for the well-being of others. He’s angry the men need to stop work to eat and sleep, and demands they work harder or be imprisoned in “The Box,” a small, metal, enclosure placed in direct sunlight. The men are to work in Biggis’ mines for gold. He’s truly a repugnant individual and series director Bruce Timm stated he intended for this one shot villain to be memorable, and the only way he knew how to make him memorable was to make him revolting. He’s almost always show with some food in his hands and stains on his clothes and he’s constantly gnawing away while complaining about the lazy bums he’s surrounded himself with.

Alfred notices Bruce’s absence the following morning, and finding the Batmobile still in the Batcave, is quite puzzled as to Bruce’s whereabouts. He notices one of the cars missing, which just so happens to have a tracking device implanted on it. He tracks it to a salvage yard where he removes the device and places it on a truck that’s being loaded with supplies, guessing this will lead him to Master Bruce. Once Alfred has a suspected location for Bruce, he decides air travel would be more appropriate (Bruce is in a desert so who knows how far away he ended up) which leads to the debut of the Batwing. Styled after the aircraft from the Tim Burton directed Batman, it’s strange to see the Batwing debut while being piloted by Alfred instead of Batman. Though perhaps it would be more appropriate to say the Batwing as piloted by the Batwing, as Alfred relies on the auto-pilot to reach Bruce. It should be noted, for television viewers the Batwing actually debuted in the two-part “Feat of Clay.”

Alfred, in need of flying lessons.

Back at the camp, Salvo for some reason decides to mock Biggis with a fart noise, which leads to a scuffle when Riley and Griff come to his aid and all three men wind up in the box. Bruce’s memory is returned to him, triggered by Riley missing his family, and the escape is on. Bruce is able to find Alfred, following a particularly rough landing, and returns to the camp as Batman to take out Biggis and his lackeys. They end up battling in the mines, where Batman is triumphant. The episode ends with the three amigos back in Gotham. When Riley offers Bruce his home as a place to crash, Bruce politely declines and introduces himself officially to the two as Bruce Wayne, prompting Salvo to suggest Riley knock him out so that maybe he’ll wake up a millionaire.

“The Forgotten” tries something different, and it should be commended for doing so. I know more than one person who considers this a favorite, or at least memorable, episode of the series for them and I want to acknowledge that. For me, this is one of the weaker episodes. Amnesia plots have never been a favorite of mine, and it’s just hard to take Biggis and his men seriously as actual threats. I appreciate the Alfred side plot, and it’s probably my favorite part of the episode, but the rest I’m just sort of “meh” about. Riley is fine, but Salvo is intended to be a bit of a joker, but he’s just not funny. I would have also liked to have seen more concern for Bruce on the part of Alfred considering it’s probably his worst nightmare to get up in the morning and find he never came home.

The best sequence in the episode is Bruce’s nightmare where he struggles to help all those who need his aid.

The score for the episode is something I find irritating. There’s a twangy theme used throughout the camp scenes that just sounds corny to me, like something that would have been featured in the 1960’s show. By the end of the episode I want to mute the television to stop hearing it. It’s even over-layed with elements of the Batman theme during the final chase sequence that makes it even worse. The episode looks fine, but the climactic moments in the mine aren’t a strong point. This show does so well putting its characters in dark environments, but they don’t blend well at all throughout this sequence. Boss Biggis is a rather huge individual too, but his model has no weight to it. He runs and bounces around like a balloon. More effort should have been made to convey just how heavy he must be.

I don’t hate “The Forgotten,” but it’s definitely one of the weaker episodes for me. I’m torn on if it’s my least favorite episode so far, as it’s between this and “The Underdwellers.” I think I probably would rank this one just ahead, but that’s not saying much.