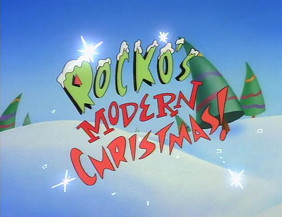 Rocko’s Modern Life may be the most 90s cartoon created during that decade. It’s certainly the most 90s of the Nicktoons, Nickelodeon’s very successful foray into original animation after years of airing other studio’s work. Rocko’s Modern Life centered around a wallaby named Rocko, naturally, and his journey into adulthood, which most notably includes self-reliance. He has to maintain a job, a home, friendships, and relationships, in a world that mostly seems out to get him. It’s very adult for a children’s show, and I don’t mean that in just the sense that some of the humor skews older, but the subject matter. Rocko  deals with stresses kids don’t have to, but maybe they’ve seen their parents do so and are able to relate that way. And if not, there are plenty of gross gags to keep them occupied.

Since Rocko is very much a good-natured person, he’s a natural protagonist for his own Christmas special:  “Rocko’s Modern Christmas.” This is Rocko’s first Christmas on his own away from his family back in Australia. He wants to have a nice Christmas with his closest friends, and is in search of Christmas cheer. Across the street, a new family is moving into a previously vacant house and they’re apparently really into Christmas since their yard is outlandishly decorated with Christmas cheer. Rocko notices the family appears to be elves, and they’re cleverly designed to kind of resemble rolled up wrapping paper with limbs. Next door, Rocko’s curmudgeonly neighbor Ed Bighead, is this special’s Scrooge. He hates Christmas and the good feelings it brings out. He wants the world to be miserable like him, and he is very distrustful of these elves.

Rocko wishes for snow. Apparently he didn’t think to check outside for snow before heading out with his sleigh and snow suit.

Rocko is a bit down at the lack of Christmas cheer in his community. It’s rainy, and there’s no snow, and few people decorate for the holiday. To explain the lack of snow, there’s a cloud over Rocko’s house that’s basically struggling to take a dump, hence the lack of snow (and our first dose of the show’s brand of visual humor). Rocko decides his house needs decorations, and he wants to throw a party for his friends. He calls up his two best buds, Heffer and Filbert, and invites them over for a Christmas party. Those two are eager to share the news around town, even though Rocko didn’t intend for them to, and soon the whole town is RSVPing to Rocko excited about coming to his party.

To get prepared, Rocko and his dog Spunky head out to the mall to do some shopping. Along the way they see their new neighbor, a shy little elf. He doesn’t respond warmly to Rocko, and instead tries to hide from him. Rocko is not offended and leaves the little guy to his own whims. At the mall, Rocko stops to buy a Christmas tree at a tent outside that’s being manned by Heffer and Filbert. In a sort of sad (but funny) gag, picking out a tree is like picking out a puppy, only the puppy-tree dies when it gets cut down. After securing a tree, Rocko heads into the mall. The little elf has basically been stalking Rocko this whole time, and eventually he gets accosted by some literal crocodile shoe salesman. Rocko sticks up for the little guy, and soon finds himself in over his head. He cleverly disposes of the salesmen, and finds the elf hiding in a shoe. They hightail it out of there and Rocko brings him home. There he meets a surly head elf, who seems to feel obligated to invite Rocko inside. Once in the home Rocko meets the other elves, who all have simple names associated with tools like Hammer and Drill. Like most Christmas elves, they’re toy makers and hard at work with Christmas just around the corner. Rocko also finds out one of the elves is missing. Mitch, who was the first elf to make it snow (or the last?), has been gone for sometime and is why there’s no snow. He also has three feet, for some reason.

The shy little elf from next door.

Rocko decides to invite his new neighbors to the party, and Ed finds out via spying. He tells Filbert that elves have nasty foot fungus, and the hypochondriac Filbert immediately breaks out in a rash in fear of contracting the elven foot fungus. Just like how news of Rocko’s party spread quickly, so does word that some infected elves are planning on attending. The party-goers all get scared, and when the night of the party arrives Rocko surprisingly finds his house empty. He’s pretty disappointed, but a knock at the door brightens him up a bit. It’s the shy little elf, and Rocko welcomes him in, but can’t hide his disappointment that no one else came. The little elf feels bad for Rocko, and after Rocko falls asleep reading him a Christmas story he heads outside. It’s there he looks up at the cloud over Rocko’s house and thinks about how the quiet little wallaby helped him out back at the mall. Then a heart pops out of him and floats up to the cloud. Like cloud Ex-Lax, the rear of the cloud begins rumbling in a rather gross fashion before he unleashes some snow – hallelujah! 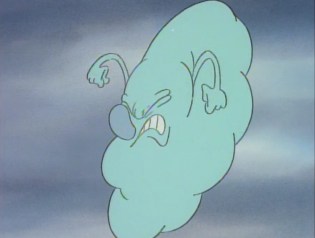 The cloud struggling to “snow.”

When Christmas morning arrives, only Rocko’s house is covered in snow. The whole town comes out to marvel at it, and they apologize for skipping out on his party. Mitch the elf even shows up and explains he’s been gone due to the lack of Christmas cheer, but the cheer of his little brother, the shy elf, has brought him back. Everyone heads inside for the party, and Ed Bighead is left to stew in his house as he looks on. The little elf shows up at his door though and invites him to the party. Ed starts to show hints of being touched by the gesture, when the little elf whips out a hammer and smashes his kneecap. Ed reacts accordingly, and then chases after the elf and manages to get tangled up in Christmas decorations and plunges into Rocko’s house, much to the delight of his wife Bev who was already at the party. As one last dose of Christmas cheer, Rocko gets a call from his parents wishing him a merry Christmas. And as a parting gag, we get a look at the next morning when everyone chucks their tree carcasses in the street.

“Rocko’s Modern Christmas” succeeds both as a charming Christmas special and as a funny one. Rocko’s brand of humor is on full display, with a lot of bad stuff happening to our main character and a lot of visual gags that are sometimes gross, sometimes mean, sometimes uncomfortable, but usually also pretty funny. It’s an extended episode, as most Rocko’s Modern Life cartoons were split into two cartoon shorts. Pretty much every character that had appeared on the show up until now is present as well, and the cast was pretty big after only 19 episodes. It’s also fully dressed up to feel like a Christmas special with its opening sequence and ending credits. This is the best Christmas special to come out of the Nicktoons besting Doug, Rugrats, and Ren & Stimpy. And I’m torn on if it’s the Nicktoon that’s held up the best, but it’s a close call between this and Ren & Stimpy. 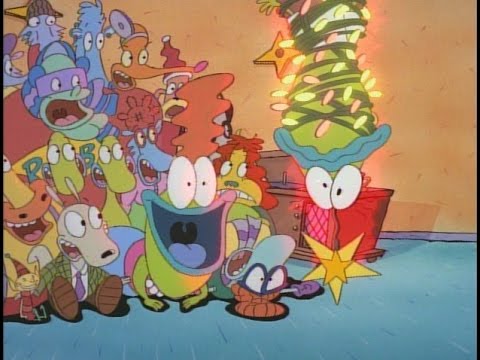 Ed is forced to embrace Christmas.

Thankfully, Nickelodeon has caught onto the nostalgia thing and realized that the kids who used to watch their shows in the early 90s are now adults wanting to relive those moments and share them with their own kids. Which is why we have The Splat, a block of programming on one of Nickelodeon’s channels that airs usually late night and focuses on 90s programming. There’s a lot of crap on there, but the Nicktoons are mostly well represented (except Ren & Stimpy, for some reason). And ever since they started airing The Splat, they’ve re-run a lot of the Nicktoons Christmas specials every year so you will likely be able to catch “Rocko’s Modern Christmas” on there more than once before the month is through, and I suggest you do.