Director Brad Bird has become quite a name in the world of film. He is most commonly associated with Pixar where he directed much celebrated films like Ratatouille and both entries in The Incredibles. Prior to that, he was mostly known for his work as an animator and director on The Simpsons. His directorial debut with the long-running franchise was the Season One highlight “Krusty Gets Busted” and he also contributed to the much loved “22 Short Films About Springfield.” It was his work as an animator with Klasky Csupo that got him his gig with both The Simpsons and The Tracey Ullman Show, where The Simpsons originated. And he probably ended up there largely because of  his work with Disney where he was a promising young animator in the 80s seemingly destined for great things with the company.

That did not happen, and perhaps it’s for the better considering all of the quality television and films we received as a result. And while those works are much celebrated, there are still many who feel Brad Bird’s finest contribution to the world of cinema is the 1999 box-office flop The Iron Giant.

The Iron Giant is the film directorial debut for Brad Bird.

The Iron Giant originated in a short story by poet Ted Hughes, who unfortunately passed away before the film was completed. It was a tale that captivated many who encountered it and even attracted the attention of famed musician Pete Townshend who crafted an entire concept album about the character. As a result, the story was ticketed for a musical release much in the style of many animated 90s projects, but when Brad Bird was hired to oversee it things changed. It was Bird who reimagined the story as one about a gun with a soul that decides it doesn’t actually want to be an instrument of death. This was partly the result of Bird’s sister Susan tragically being murdered during the film’s production. Warner Bros. also brought in Tim McCanlies to co-author the screenplay and the musical components were eventually dropped, though Townshend still received an executive producer credit.

The Iron Giant is a traditionally animated film which also features some CG elements, most notably the giant itself. The film is about a young boy named Hogarth Hughes (Eli Marienthal) who lives alone with his mother in a small coastal town in the state of Maine during the 1950s. Cold War paranoia is sweeping the country and is the framing device for the film. When a mysterious, 100-foot tall, robot crash lands nearby, it’s Hogarth who first finds him and befriends him. Through Hogarth, this massive robot (Vin Diesel) learns empathy and also receives a primer on life and death. The somewhat lonely Hogarth views the giant like an ultimate toy, but also comes to view the behemoth as a friend as well.

It’s the tale of a boy and his big ass robot.

Now, 100-foot tall robots naturally attract attention. When the giant first arrives on Earth, it inadvertently causes a ship to crash and the captain of that ship alerts the FBI. The government dispatches agent Kent Mansley (Christopher McDonald) to investigate and he is able to follow a series of clues, as well as some coincidence, to the home of the Hughes. It’s there Kent realizes Hogarth knows something, and he rents a room from Hogarth’s mother (Jennifer Aniston) to keep an eye on the lad while also hoping to earn his trust and in turn uncover the truth about this giant being that’s eating the community’s metal. In turn, Hogarth has to try and keep the secret of the giant hidden and he turns to a local beatnik artist named Dean McCoppin (Harry Connick Jr.) for help since he happens to run the local scrap metal yard. 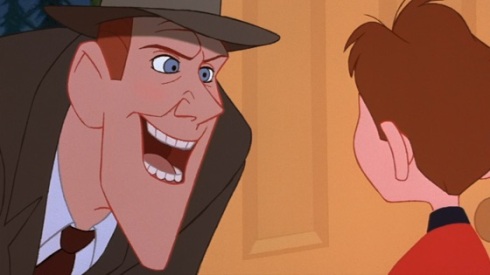 Mansley is so obsessed with his job that it allows him to be more of a comedic element early on in the film, but he eventually turns quite sinister.

The film contains plenty of elements of comedy and drama as the tale unfolds. Hogarth and the giant have to learn how to communicate with each other since the giant doesn’t understand English initially. There’s also a lot of physical comedy bits between Hogarth and Kent as Hogarth tries to keep his friend hidden and finds creative ways to get Kent off his back. Probably the best piece of comedy occurs when the giant’s hand, having been separated from the robot via a collision with a train, stumbles into Hogarth’s home during dinner in search of the rest of his body. Hogarth is then forced to go to great lengths to keep the mechanical monstrosity from his mother, and eventually Kent, before rejoining it with the rest of the giant.

The latter part of the film loses the comedy in favor of more dramatic story-telling. The central theme of the film is you are what you choose to be, and it’s an important thing for the giant to learn as the robot is equipped with some serious firepower. This is discovered when Hogarth accidentally trips an automated defense mechanism in the robot, and it’s further exacerbated when the army eventually learns about the robot’s existence (because it has to). It’s a rather simple message, but one that easily resonates with an audience which is partly why the film is so beloved. The pairing of a kid with a being not of this world will naturally draw comparisons to E.T. and it’s an apt comparison. The only thing really separating the character of E.T. from the giant is that E.T. largely remains a passivist during his story while the giant most certainly does not.

It’s a real joy to watch the film play with scale. Here, the giant has to literally squat down to fit in the same frame as Hogarth.

What the film chooses to leave out is the giant’s backstory. We don’t know why he’s here, or where he came from. Both are questions viewers are likely to ponder, but in the grand scheme they mean little just as it didn’t matter why E.T. was on Earth. We also don’t know much about Hogarth and how his life was before the events of the film, save for the fact that he appears to be a good student and a latchkey kid with few friends. And like the giant, it doesn’t matter and Bird was wise to ignore these details because it keeps the film at a quite tidy 87 minutes. Perhaps my biggest criticism of The Incredibles and its sequel is that they’re both just too damn long, so it’s nice to watch a Brad Bird feature that’s under 90 minutes.

The film is set in 1950s Maine partly to invoke images of Norman Rockwell. The choice is an excellent one as the town of Rockwell presented here is quite idyllic and cozy. The woodland scenery is especially gorgeous and lush and the human characters have a style to them that is not derivative of past Warner films or Disney. The giant is animated in CG largely because it was an easy way to keep his steel frame natural and consistent. He has a simple design to him and the texture work is kept fairly simple as well which helps to blend the giant with the hand-drawn visuals that surround it. He doesn’t stand out in an unnatural way, at least he doesn’t as much as a 100-foot tall robot can, and the choice to render the being this way appears to be a sound one as a result.

The film’s central message is you are what you choose to be. For the giant, that’s Superman.

Michael Kamen is responsible for the film’s score and it’s scope is quite grand and appropriate. When the giant takes to the sky for the first time it’s exuberant and triumphant, and when it needs to be a bit melancholy it strikes the right tone. The film completely discarded its musical origins, save for an in-universe PSA about the duck and cover advice you’ve probably heard about that existed back in the 50s. The voice cast is tremendous and Eli Marienthal as Hogarth is especially deserving of praise given his young age at the time of recording. Aniston and Connick Jr. are perfectly capable in their roles, while McDonald toes the line of obsessive detective and parody rather adeptly in his portrayal of Kent Mansley. Diesel isn’t asked to do much as the giant, similar to his eventual role as Groot for Guardians of the Galaxy, but he does a good job when the scenes later in the film ask more of him. If your eyes don’t well up a bit when you hear him say “Superman” during the film’s climax then you have no soul.

The film finally received a Blu Ray release in 2016 which also included two minutes of new footage. It was dubbed The Signature Edition.

The Iron Giant is a heartwarming tale about an outcast finding its purpose in life all on its own, even if that purpose strays from what others had earmarked it for. It’s also a tale of friendship and empathy, of right and wrong, and one about being mindful and trusting where appropriate. It’s easy to react to a creature such as the giant with fear, but maybe it’s best to give others a chance first and allow them to give one a reason to fear them beyond simply appearance. It’s also a gorgeously animated film and one of the last of its kind as it wasn’t long after the release of The Iron Giant that the majority of animated features switched over entirely to 3D, CG, animated stories. Most acknowledge now that the reason this film failed at the box office was due to Warner Bros. not marketing it well. Even though it seems many agree with that assessment, it didn’t stop studios like Warner from using commercial failures like The Iron Giant as justification for moving away from traditionally animated films. It’s unfortunate as I fear we as a society will soon lose the ability to create such wonders simply because Hollywood isn’t providing a reason for those to learn these skills. If that’s the case, at least we’ll always have wonders like The Iron Giant to look back on.