One-hundred and nine episodes plus three features leading to one-hundred and twelve blog entries have been devoted to the subject of Batman: The Animated Series. It started as a celebration of the show turning 25 and then as a curiosity piece. Since its premiere in 1992, the show had become much celebrated and praised all over. It’s exceptionally rare in this age of social media to see anything basically universally loved, but that was the case for BTAS. I had a lot of good memories of the show myself. I watched it as a kid and when the show received a DVD release I bought it up. And I watched them all. Batman became a show I had experienced and enjoyed both as a kid and as an adult, but some ten years or so removed from when I last watched it in total I still wasn’t sure just how good the show was.

And so I watched it again. And after each episode I made a little blog entry afterwards. Well, at first they were fairly little as I wasn’t quite sure what I wanted to do. Did I want to do an episode review or did I want to do a recap? I started leaning more towards the review side while also inserting a brief summary. Perhaps being influenced by all of the recap style podcasts I listen to, the entries drifted more towards that style. And they grew. Oh, did they grow. This little weekly entry soon routinely ran for thousands of words. I’m not saying that makes them any better or worse, but it certainly transformed my little project from something I could regurgitate via my keyboard rather quickly to something much more demanding.

Even though my vision for this feature grew beyond my initial plans, that doesn’t mean I regret anything about it. Far from it, actually, as I really enjoyed my time with this show once again. I may have even enjoyed it more than ever as I found it much easier to find things I liked about episodes I previously wasn’t very high on. Some of those episodes are still rather poor, but I can at least see what the writers were thinking and for the most part the animation is always quite good. It’s a very entertaining program, and while it’s still primarily a children’s cartoon, there’s enough depth there to captivate an older audience.

The character of Batman drew people in, and villains like Two-Face and Mr. Freeze kept them coming back.

In re-watching the show I found there were certainly things that consistently worked and things that did not. When the show centered on a sympathetic villain it was usually at its best. Batman can be pretty ruthless in his application of justice, but the guy does have a heart. He often makes the right decision, though he’s also not perfect. Mr. Freeze, Two-Face, and Clayface ended up being my favorite villains. And when Harley Quinn was thrust into a sympathetic role she soared. Even Arnold Stromwell was interesting when we saw his softer side. That doesn’t mean everyone needs that to work though. Rupert Thorne was consistently nasty and thus interesting, same for Roland Daggett. The Joker was also often very entertaining and the show never made an attempt at deviating from what he is, which is something filmmakers today could learn from.

There were still a few duds when it came to the villains. Surprisingly, Catwoman was rarely compelling as the show didn’t seem to know what to do with her. For whatever reason, there was a desire to portray her as something other than a villain. Rather than make her an antihero, she more or less just became a victim. There was a bit of a course correction in season two, but only when the show returned as The New Batman Adventures did it feel like the show actually knew what it wanted to do with one of Batman’s most popular foils. Two-Face also tended to flounder after his strong debut. He was able to rebound a bit, but it was a shame to see so much of what his debut built up was seemingly cast aside. The Penguin, another famous Batman villain, was also rarely up to the task when called upon with many of his leading roles serving as the show’s worst. He was usually most entertaining when paired up with other villains to play off of them. The show seemed to acknowledge this by putting him in more of a supporting role later on when he became a club owner.

Mostly, when I consider the legacy of this show I mostly recall what it did for the lesser villains. Going into 1992, the only Batman villains I was really aware of were the ones featured in the Adam West show. The Riddler, Penguin, Joker, and Catwoman were the most famous, but I also recalled Mr. Freeze and, for some reason, King Tutt. This show is how I was introduced to other, lesser, villains such as Two-Face, Poison Ivy, Scarecrow, Clay-Face, and others. And for the most part I loved these “new” villains most of all. Sure, there were some duds for me like The Clock King or the one-off werewolf character and Lock-Up, but mostly the new guys were pretty interesting. And you can’t talk about this show without talking about what it did for Mr. Freeze. Previously more gimmick than character, Freeze became one of the most popular Batman villains seemingly overnight thanks to his portrayal in “Heart of Ice.” No, he never had another story as good as that one, but because that episode was so good it made any future appearance appointment television just to see if another Freeze story could match that one. 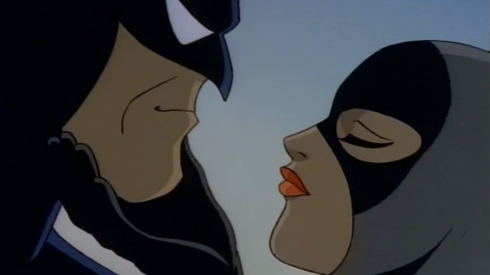 Oddly enough, the show seemed to struggle with Catwoman not knowing if it wanted to portray her as something of an antihero or as her more traditional cat burglar persona.

Since this show is primarily a half-hour cartoon intended for kids, it runs into some issues. The format it strived for is a limitation. That inaugural 65 episode first season included several two-part stories, but following that every other story was confined to a single episode. This limitation is only a limitation if the writers allow it to be one, but sometimes it felt like certain episodes were short-changed. It also leads to numerous instances of Batman just turning to his wonder computer to solve a problem. That was definitely my biggest pet peeve with the show this time around as it quickly became a trope of the show. Batman turning to his computer felt like The Simpsons using the living room television to either start or advance a plot. An episode can still be good when that element is present, but it certainly feels cheap.

I also can’t offer a proper conclusion on the show without talking about the move from Fox to the WB and the creation of The New Batman Adventures. The switch did lead to some good things. For one, it advanced characters like Dick Grayson and Barbara Gordon and let us see some actual development. Some conflict between Batman and Robin was teased during the Fox years and it was rewarding to see that go somewhere. I think the show could have mined that conflict for more material, but it was mostly handled well. Barbara, on the other hand, was a bit glossed over. Sure, she was now an accepted ally as Batgirl, but we learned very little about her character. Did she have a new outlook on crime fighting? What was her end game? We also never even got to see what came between she and Dick, which was unfortunate.

Aside from that, the move to WB also allowed for less censorship. This didn’t have a huge impact on much unless you’re really turned on by seeing a thin line of blood streaking from a character’s mouth, but it did really open up The Joker. He went from being mostly just a lunatic to being a violent lunatic. He has a few moments to be truly mean during his time on WB giving the character a similar feel to how he was portrayed in Mask of the Phantasm. This did lead to some criticisms I had with the direction of Harley Quinn, but I think I did a good job of highlighting those issues in my posts on the episodes she appears in.

No matter how many times I see the new-look Joker I just can’t fall in love with it.

What obviously stands out the most though in the change in networks was the new design. While some characters looked unchanged and a few looked better than before, I mostly disliked the new style choice. Less detail and odd choices are mostly to blame, but even the animation came across a bit too cartoony for this show. The whole tone of the show was also thrown off and I think that had to do with the ensemble cast and the simplified portrayal of each of the leads. The writers basically assigned one archetype to each character and mostly stuck with it. This left no room for nuance and it had the most drastic impact on our main lead, Batman himself. In the first two seasons we got to see different sides to the character, but in The New Batman Adventures he’s basically just grim and curt. He’s so boring, and sadly none of the other leads outside of Nightwing really offer much. Robin is mostly just a vehicle for bad puns and Batgirl offers even less.

As a result, I can comfortably say that The New Batman Adventures era is inferior to what came before it. That doesn’t mean there isn’t still quality to be found there. Much to my surprise, a few episodes actually rank quite highly and the worst of the show is still found in those first two seasons. A lot of that third season is just okay or average with few true stinkers. Though that is a post for another day. 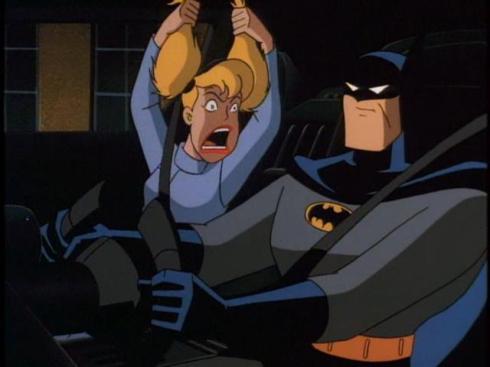 The show is exciting and fun and gave us some truly memorable characters. It’s one of the best things to ever happen to Batman, if not the best.

Ultimately, I set out to decide for myself if I felt Batman: The Animated Series was overrated or properly rated. It never occurred to me that it could be underrated, and it certainly is not. While the show didn’t deliver a slam dunk each episode, it also totaled 109 episodes and what show has ever hit a home run every episode for such a long time? Even much celebrated shows like Breaking Bad have a lesser episode here and there, and that particular show produced far fewer than 109 episodes (though to be fair, in terms of total minutes it’s probably much closer). And no, I’m not trying to compare this show to Breaking Bad, but making the point that it doesn’t have to “wow” the audience every time out to be a great show. Calling it the greatest television show based on a comic book feels right. It’s certainly the greatest cartoon, and I also came away feeling that it’s totally defensible for this to be someone’s favorite depiction of Batman in any medium. It’s a great show with a lot to offer. It’s primarily an action vehicle, and the wonderful animation allows it to be a pretty great show based on its action alone. What puts it over the top are the stories, the captivating villains, and it’s wonderful sense of style. The music of Shirley Walker, the performances of actors like Kevin Conroy and Mark Hamill, it’s a production that oozes quality. So yes, Batman: The Animated Series is properly rated and if I am certain of anything it’s that I will watch this series in its entirety again. And again…