Every year I do this I am reminded at how surprising it is that so few Christmas themed Merrie Melodies and Looney Tunes shorts exist. Disney put out several memorable ones over the years featuring their characters, but Warner Bros. mostly stayed away. Bugs Bunny would eventually get a Christmas television special in the 70s, but that was well past the age of the cartoon short.

That’s not to say Warner didn’t produce any Christmas cartoons under their two most popular banners, just that most didn’t feature the company’s most recognizable faces. The first of which, The Shanty Where Santy Claus Lives, contained no recognizable faces even though this was during the heyday for Bosko. The Rudolf Ising directed short was the first Merrie Melodies cartoon released in 1933, missing the Christmas holiday by a couple of weeks. Even though the Merrie Melodies line of shorts is often distinguished from Looney Tunes due to the presence of color (that wouldn’t come until 1934), this is a black and white film that’s fallen into the public domain.

Possibly the nicest piece of animation in the short.

The short is a Depression-era cartoon, hence the name The Shanty Where Santy Claus lives. It’s not a particularly well known short as it wasn’t shown on television much given that it’s associated with a holiday and thus confined to a short window for release. Since it’s from 1933, it also doesn’t look particularly great compared with the more popular Warner cartoons and, as I already mentioned, it’s devoid of the characters the studio is known for. Despite that though, it did receive some play on Cartoon Network during the 1990s, but sometimes with alterations. I honestly can’t recall if I ever saw this one on the channel. I used to love falling asleep to the Christmas Eve programming on Cartoon Network which ran all night and mostly consisted of winter or Christmas themed cartoons. I could usually bank on seeing Peace on Earth at that time and only that time. This cartoon was probably shown as well, but I don’t remember it specifically. When viewing it now, it has an air of familiarity to it, but that could just be my imagination.

The cartoon begins with bells ringing and they are gorgeously animated. It then heads for ground level where the animation is less gorgeous and is accompanied by “Silent Night,” something that will become a trope in Christmas specials to come. A disheveled looking kid is drearily stomping through the snow with a floppy hat and his hands stuffed into his pockets. His exaggerated feet practically look like snowshoes. He hears singing coming from a church, but declines to enter. He perks up momentarily when he hears another commotion. Racing over to a window he looks in on a bunch of kids dancing around a Christmas tree. He then turns to the camera with a sad face as the wind howls. 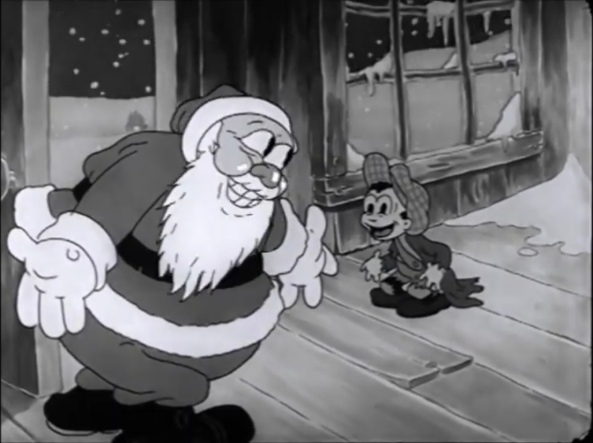 Listen kids, normally it’s not okay to run off with an old guy promising toys.

The boy gets caught in the gust which tosses him into the side of his shanty. The snow falls off the roof and buries him momentarily. He pulls himself up and heads inside. It’s a one-room shack with hardly anything inside, including parents. He’s rather down, even weeping, until he hears something outside. Sleigh bells herald the arrival of Santa Claus who comes bursting in singing the short’s signature song. Santa offers to take the boy with him to his shanty where toys and wonderful things await. The kid is more than eager to take old Saint Nick up on his offer and the two head outside. Santa puts the boy on the back of his sleigh before climbing in himself. He orders the reindeer to “giddy-up” and as they take off the boy tumbles from the back of the sleigh. Malnutrition has apparently not affected the boy’s speed or conditioning as he races after the sleigh and essentially outruns the reindeer to get back into Santa’s arms. This time the old man is smart enough to put the kid in the sleigh proper and the two take off into the sky. 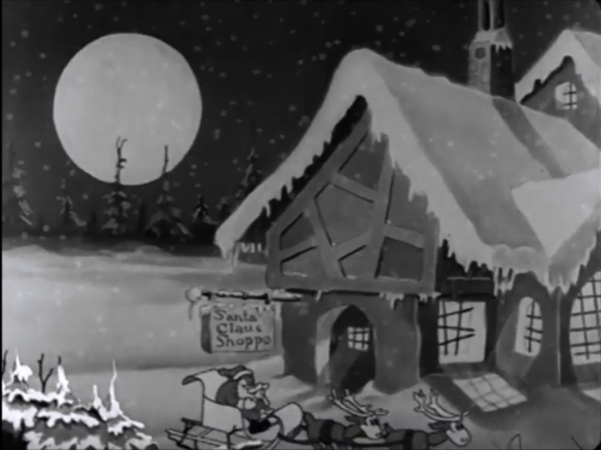 You are correct if you assumed Santa flew past that moon before landing in front of his shop. Maybe the first ever animated shot of Santa in front of a moon?

Santa and his team of two reindeer (the Depression even impacted Santa) make it to Santa’s shanty. And it’s hardly a shanty. The two head inside and the kid’s eyes widen to see all of the toys waiting to be delivered to new homes. Some of them are a bit…iffy looking, but we pan back to the kid pretty quickly who’s looking quite happy. He heads in further and starts playing with a kangaroo toy. When he squeezes a ball on the end of a tube it makes the little joey pop out of the pouch. Cute. 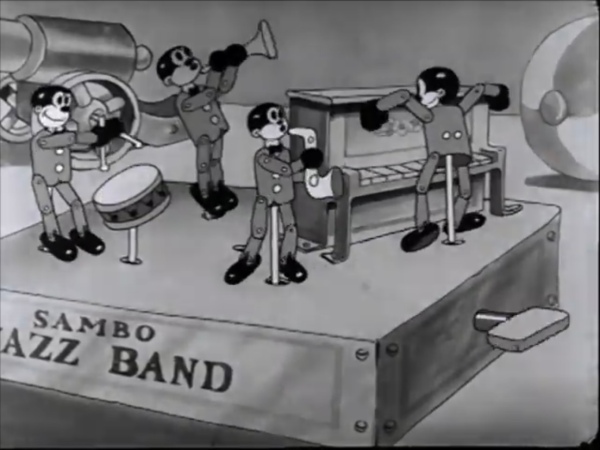 The boy then turns his attention to a musical toy and….oh no, here’s our reminder this is a cartoon from the 1930s. A toy of jazz musicians is displayed and they basically all look like they’re pulled from a minstrel show. We then see a baby doll crying out for it’s Mama before tumbling off the shelf into a box of soot. It then emerges, in blackface, crying for its “Mammy” who then shows up to retrieve the toy. And we’re not done! A rag doll starts dancing as the short’s song returns with two other dolls that also look like blackface dolls. She then ditches the pair to watch on the side cheering them on with some maracas. 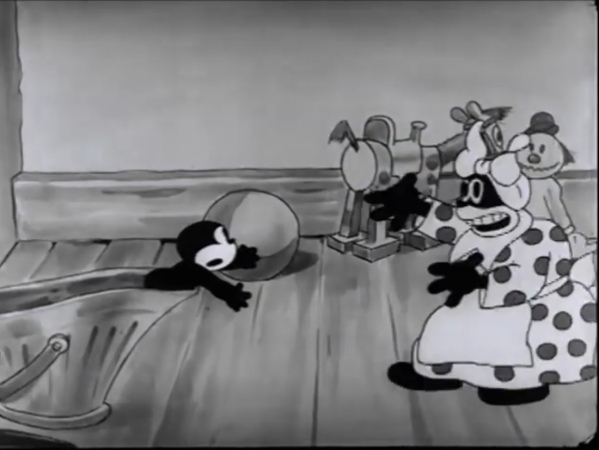 Oh my god, it just got worse!

More toys are spotlighted including a doll that tries to blow up a balloon. She sucks in the air and turns into a woman of generous proportions who begins to sing “Shine on Harvest Moon” in what is undoubtedly a caricature of singer Kate Smith. There’s also a toy soldier on a baby bank. When the register pops open it’s, get this, full of babies. A teddy bear is shown playing a trombone and a jack-in-the-box beside it pops out and it’s thankfully not racist. The trombone keeps hitting it into a drum which is mildly amusing.

We then end up at the Christmas tree which has a lit candle on it. One of the toys knocks it over and soon the tree catches on fire (and you thought those giant bulbs from the 40s and 50s were a fire hazard) forcing the fire brigade into action. The toy fire brigade, that is. A fire engine races over and tries to put out the flames, but it is just a toy. We then see the boy again, the supposed main character who has apparently just been watching this whole thing and is possibly willing to let the racist toys burn, who decides he should take some action. A hose is conveniently at his feet and hooked up to a sink. He inserts the other end into some bagpipes which are just laying on the floor and runs over to the tree. He squeezes the bagpipes spraying water out of the various pipes which douse the flames. The toys cheer triumphantly and the short comes to an abrupt end. 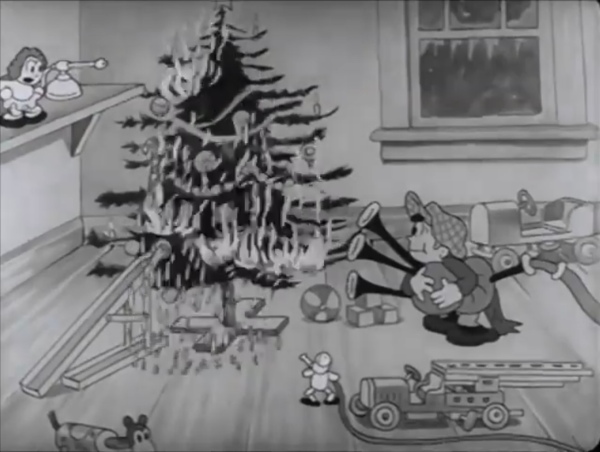 Kid, maybe you should just let this place burn.

I suppose when I saw this cartoon was in the public domain I should have expected some racism. Cartoonists, for whatever reason, loved these blackface gags in the 20s and 30s and really seemed to like the black figures seen here. Maybe it’s a benign reason, since these cartoons are in black and white it was an easy gag to get over, but it is what it is. When Cartoon Network aired this one it eventually edited out those parts, though I think at one point in time they were left in. Considering the short is a little over 7 minutes with that stuff intact, it must have been incredibly short without it. If you watch a lot of old cartoons, there’s nothing in here you haven’t seen before. I don’t think those images would keep this from being released as part of a collection of Warner cartoons, but it sure would earn it a disclaimer.

Well, the fire’s out and…it’s over? Okay then.

Visually, this is an old cartoon and it shows. The backgrounds aren’t very detailed and certainly pale in comparison to what Disney was doing at the time. The characters have noodle-like limbs and their mouth movements are a bit odd. There are some twin characters that were probably just doubles of the film cells or possibly traces from one image to another as they move in perfect unison. The kid main character also doesn’t look particularly good, but a lot of effort was put into Santa who has a nice, jolly, demeanor.

As a Christmas toon, this is essentially a piece of wish fulfillment. A poor kid is not going to get to enjoy Christmas like the more well-off children will, so Santa shows up to whisk him away. It probably wasn’t something a poor kid needed to see as it would have felt patronizing. Santa is also barely in it as he just shows up to take the kid and then basically disappears once we get to his work shop. I kept waiting for him to come in and put out the fire (or destroy those racist toys), but he must have left to go find some other poor kid. There’s a lot of public domain Christmas music at play though, and the one original song works well enough. 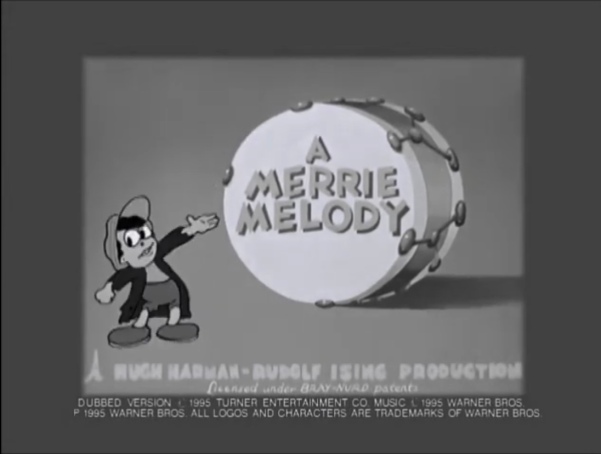 He’s certainly not as charismatic as Porky.

The Shanty Where Santy Claus Lives is a public domain cartoon that is quite easy to come by. Just typing the name into a search engine should produce plenty of results, or you can even just go straight to YouTube. There are various public domain Christmas VHS and DVDs that include it, and Warner even featured it on a laser disc release of shorts back in the day, but I doubt you want to go that route. Because it’s free, the quality can vary. Some claim to be upscaled to HD, but they get a blurry, smear, effect as a result. Some are very gray in appearance and there’s even some that are practically yellow. Still, you don’t have to look too hard to find one with nice enough contrast levels. I don’t really recommend it, but it is only 7 minutes so it’s not exactly much of a time commitment. It’s a shame the few gags present are mostly racist humor. The only memorable non racist gag was the baby bank, which wasn’t particularly funny either. As the first Christmas-themed Merrie Melodies short, it at least has some historical significance. Just beware of the racist stuff.

This entry was posted on Thursday, December 19th, 2019 at 12:16 am and tagged with 1930s cartoons, christmas, christmas cartoons, hugh harman, looney tunes, merrie melodies, rudolf ising, santa claus and posted in Film. You can follow any responses to this entry through the RSS 2.0 feed.
« Dec. 18 – Little Dracula – “The Bite Before Christmas”
Dec. 20 – Lilo & Stitch: The Series – Topper: Experiment 025 »