There’s a scourge taking over our local record stores, clothing outlets, and gaming boutiques. It comes in mass quantities dominating its chosen territory at the expense of other merch. It swears no allegiance to anyone and will even place mortal enemies side by side as it amasses an army of licensed property of yesterday and today. I am, of course, speaking of Funko Pop! vinyl figurines. Where I once had a local record store, I now see what is practically a dedicated Pop! outlet. Gamestop devotes considerable shelf space to them and they even show up in drug stores. It’s hard to find a licensed property that isn’t in Pop! form these days and since they keep on coming it leads me to believe they’ll be around for some time to come.

And considering the brand’s scope, it’s obvious people are into these things. Funko sells special cases to keep your Pop! mint-in-box and I do see people get legitimately excited for new releases, even though every time I’m at a store that features these things prominently I rarely see someone actually pick one up and head for the register. I don’t think they’ve reached the level of Beanie Baby popularity from the 90s, but they must be doing well for them to persist.

The source material for today’s subject.

If you’re not familiar with Pop! figurines then you’re probably not human, but I’ll indulge you anyway. They’re essentially little plastic statues that adhere to a standard form. They all feature an oversized, oval, head with a tiny body. They’re either non-articulated or just the head swivels. The eyes are always circles and one color, typically black. Most characters don’t have a mouth, but as the line has persisted I’ve noticed more unique head-sculpts that do indeed feature a mouth. It’s a simple, identifiable, style that can be applied to virtually anything depending on how much effort Funko puts into the sculpt. It seems to work well for cartoon characters, especially anthropomorphic characters, but it’s not universal. For one, I think the ones based on The Simpsons look awful, but I’ve encountered many that look fine. Live-action personalities can also be adapted and they typically turn out all right. It’s a brand, and it’s obviously successful. I would rather purchase a Kid Robot mini-figure, but at least these ones don’t come in blind boxes. 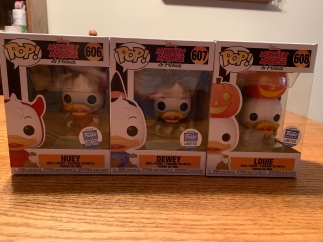 When it comes to my own interaction with Funko Pop! I am merely a casual participant. I wouldn’t even call myself a casual fan or collector, I’ve just somehow managed to end up with some here and there. I used to buy the Frozen ones for my wife as she expressed a fondness for them and I’ve picked up other Disney ones here and there. I currently have a Remy from Ratatouille in my kitchen because he looks cute and fits in with the setting. Mostly, they end up being the occasional thing I’ll buy for my desk at work, but I’ve mostly reached my limit there. I don’t seek out any particular license, it’s more just a case-by-case thing where if I really like how something turned out then I may buy it. That’s how I ended up with Rocko, Scrooge McDuck, and Stimpy. Rocko in particular works well in this style, and I liked the personality on display of the other two. I considered getting Ren to pair with Stimpy, but I just didn’t like how he turned out. Normally I can’t leave a character all by itself, especially from a famous duo, but with Pop! I just don’t have much of a collector’s impulse.

What I do have a weakness for though is Donald Duck, especially limited merchandise based on him or one of his cartoons. I am especially fond of the classic shorts, and there isn’t many better than 1952’s Trick or Treat. That’s the cartoon where Huey, Dewey, and Louie team up with a new character, Witch Hazel, to get back at Donald for refusing to treat on Halloween. In that cartoon, the nephews are depicted in Halloween costumes and they’re quite adorable. The designs are so popular and beloved that they were reprised for the 2017 Mickey Mouse special The Scariest Story Ever. 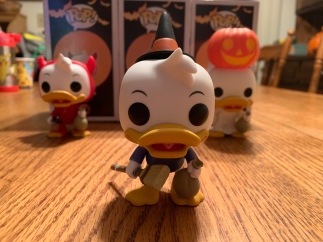 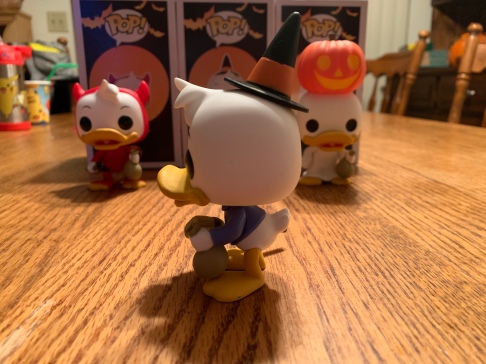 In celebration of that short, Funko did a special release of Huey, Dewey, and Louie in costume as Pop! figurines. This isn’t their first Pop! exposure as they were part of the DuckTales wave as well. They were sold exclusively on Funko’s website as a three pack and I just couldn’t resist.

A little defect on Dewey’s broom.

The trio are each packaged separately in a box under the Mickey Mouse and Friends banner. I wish they had come in a special box together, but that adds cost and companies are usually loathe to do that. It also would have been nice to see some artwork from the sour material, but oh well. Since their costumes are quite different, Funko wasn’t able to do the usual of creating one figure and painting them different colors. The likenesses are quite good, though obviously they’re in that Pop! style. It helps for Louie in particular that his character was pupil-less in the cartoon so the Pop! dead eyes aren’t as noticeable here. The paint applications are mostly clean and I like that they included Louie’s pumpkin on his head. Only Dewey appears to have any defects as he has some slop on his hat and feet plus an odd mark on his broom handle (pictured).

Even though Pop! figurines are sold at toy stores, I wouldn’t call these toys. My kids certainly like the aesthetic of the figures and were pretty excited when they came in the mail, but there isn’t anything they can really do with them. These guys are destined for a shelf, and I was even tempted to leave them in their boxes, but found they didn’t display as nice. These will be a part of my annual Halloween décor like the Grinch Pop! figures I own and display at Christmas. One thing I appreciate about these figurines is the packaging is easy to utilize for storage. There’s a plastic, molded, tray inside the box that is easy to remove and reinsert. There’s no tape on the top flap so you don’t even need to bust out a razor blade to get into these things. 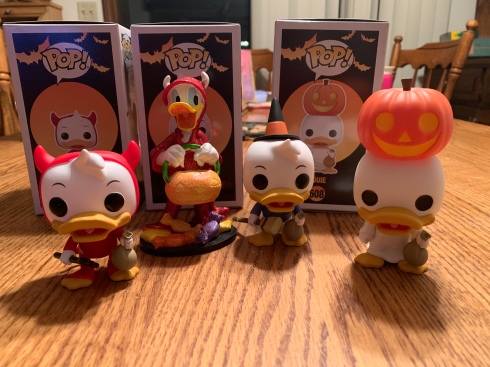 I had to include a picture with their Uncle Donald.

If you’re interested in acquiring these yourself, they’re currently for sale on Funko’s website. They’re sold together for $45 plus shipping and taxes which is pretty close to the retail price most Funko figures sell for. If you don’t like Pop! figures then these aren’t going to change your mind. For Pop! figures, I think these are well done and there is enough of the classic design of these characters contained in the figures while conforming them to Funko’s brand. And they’re fun, decorative, seasonal figures that aren’t horribly priced. I do wish they were closer to the 10 dollar range as opposed to 15 as the current price point is basically the maximum Funko can charge without really turning folks off. It’s especially attractive for people who like to acquire merchandise related to the Trick or Treat short, as the Walt Disney Classic Collection of ceramics are way beyond my price range.