There’s a new Pixar movie incoming next month, which also means lots of new merch! Especially when the movie is none other than Toy Story 4 as what movie franchise could possibly lend itself better to toys than one about actual toys? Toy Story 4 is a merchandising juggernaut for Disney and a cash cow at the box office as well. That’s pretty much why it still exists as Pixar never intended to even do Toy Story 2. Normally, cash grabs can seem cynical, but in the case of Toy Story I think all can agree that the franchise’s continued existence is very much a good thing as it has yet to deliver a dud. Toy Story 4 could obviously change that, but for now that feels unlikely.

Lego is back to supplement the film with construction sets based on the property. This isn’t new, but what is new is that we now have some pre-existing mini figures in need of some company. Prior Toy Story sets put out by Lego went with customized mini figures that prioritized likeness over the traditional mini figure aesthetic. With Lego’s first wave of Disney themed mini figures a few years ago, the company created a Buzz Lightyear that is basically a traditional mini figure but with some accessories. The line also included an alien which was more like the old Toy Story mini figures in which Lego went with a custom headsculpt. Those two guys seemed lonely on my shelf, so I was happy to check out the latest sets to see what I could do for them.

Woody together with his former adversary turned best friend.

And the one that jumped out at me is Lego 10766 – Woody and RC. This is essentially a remake of an old set, 7590, which featured Woody, Buzz, and RC plus the giant rocket from the climax of the original Toy Story. I don’t know why they’re doing a scene from the first film in promotion of the fourth, but I’m not complaining. This set is simpler and includes Woody as a more traditional mini figure, RC, and some in-scale army men. For the low price of 10 dollars, it felt like a no brainer when I saw it at the store as I could easily pair it with the Buzz I already have. 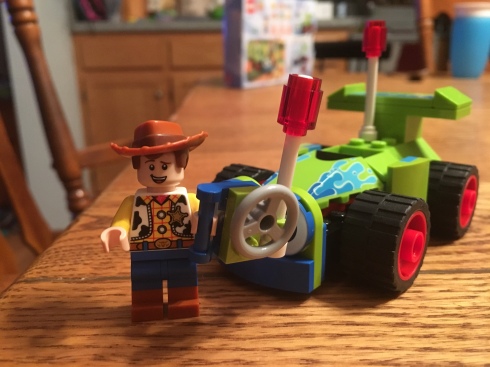 Woody is the driver here.

Woody is a pretty straight-forward mini figure. His hat and hair are attached to his head. They’re likely separate pieces and could be separated by someone with some degree of determination, but I am not that person. All of his costume details are printed on and there’s no holster or anything additional. The little army men are just small, all green, pieces. They’re a cute touch, even if they’re not exceptional. There are also some cones to put together and an assortment of boxes with colored lids. It would have been nice if instead of boxes Lego had just included traditional alphabet building blocks, but that would require some custom printing and Lego obviously wanted to target a smaller price point for this one.

The cockpit only has room for one.

RC is the main attraction. His build is quick and simple, but also quite clean and functional. His decals and eyes are printed pieces so no stickers to screw around with. You could probably build him just by looking at a picture, but there are of course instructions included. He also features a little remote control that Woody can hold and it’s also a simple construction, but one that captures the likeness quite well. Woody can fit in the driver’s seat area easily and I so far have elected to position Buzz on the tail piece. There’s nothing for him to click onto though. This RC is not as robust as the older one, but it works. About the only complaint I could levy is that the front bumper could have been done in a more inventive manner and the rear wheels should be larger than the front. He sits a bit too flat compared with the source material.

Where Woody and company can expect to live out their days. It beats an attic.

A quick and simple post for a quick and simple Lego set. This one does its job and I’m happy to position Woody, RC, Buzz and the Alien together amongst my other Disney collectibles. And while I’d love to add Jessie or Rex, I don’t see myself shelling out for additional Toy Story 4 sets. I prefer this aesthetic for the figures compared with the older ones, and it’s nice to see a relatively cheap, licensed, set from Lego. I don’t think I need any additional Toy Story characters (technically, I don’t need any at all), but maybe I’ll change my mind after seeing Toy Story 4.

This entry was posted on Wednesday, May 29th, 2019 at 3:00 pm and tagged with buzz lightyear, disney, lego, pixar, toy story 4, woody and posted in Film, toys. You can follow any responses to this entry through the RSS 2.0 feed.
« Bucky O’Hare and the Toad Wars – “Kreation Konspiracy”
Toy Collecting While Adulting »