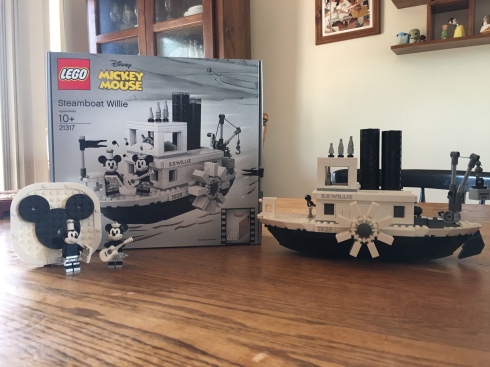 It was just over a week ago I made a post wondering what happened to the Lego/Disney relationship. Sure, there have been some Duplo sets and the Lego Friends brand has featured some princess characters, but nothing major followed the 2016 release of mini figures and Cinderella’s Castle (based on the structure in Walt Disney World’s Magic Kingdom). At the time, I thought those releases were just a start of things to come, but Lego has been content to just stick with movie tie-in sets for Disney owned properties like Avengers and The Incredibles.

Last year presented an opportunity for something special. On November 18, 2018 Disney celebrated 90 years of Mickey Mouse dating back to the release of his official debut cartoon Steamboat Willie (insert obligatory acknowledgement that the first Mickey cartoon was actually Plane Crazy). Steamboat Willie seemed like an obvious release for Lego given the occasion and the fact that it would be a fairly simple set:  a steamboat and re-releases of Mickey and Minnie. When November came and went without such a set, I was actually surprised and just assumed that Lego didn’t see the value in coordinating a release with Mickey’s 90th. 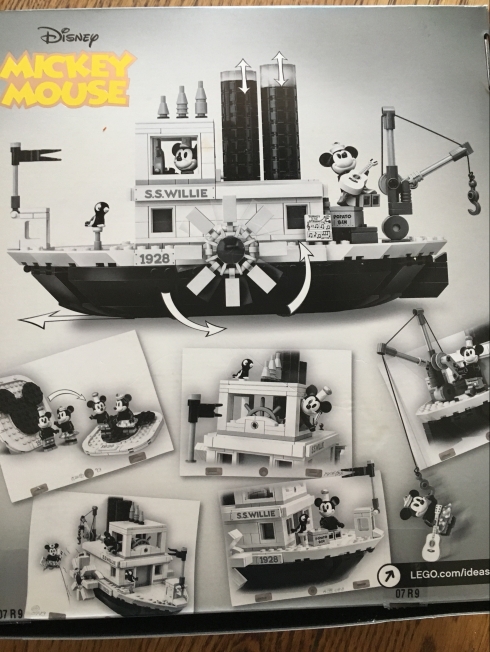 The rear of the box.

Apparently, it was just an issue of timing. For whatever reason, Lego held off until April of 2019 to properly celebrate the 90th birthday of Mickey and Minnie as Steamboat Willie is now in brick form. And to top it off, Lego even announced a second wave of mini figures to follow in May (still no Goofy or Pluto though). Perhaps it was just an issue of not getting the legal side of things straightened out, not just with Disney, but also with the creator of the set, Máté Szabó. This one originated as a Lego Idea, meaning a fan created it and uploaded it to Lego’s creator website where other fans could choose to back it or not (there’s no monetary component for backers like there is with a crowd-funding site, it’s just a simple vote of support) and when it hit the required amount of votes it then went to Lego for final approval. This is how many sets have made it to retail and for Lego (this one is numbered #024, apparently it’s supposed to be #025 though) it’s practically free development as they’re under no obligation to produce anything, no matter how many votes it gets.

Steamboat Willie was likely an easy approval for the company since it’s a relatively modest set with a recognizable character owned by a company that Lego regularly does business with. It may have arrived a few months late, but I suppose that’s better than not arriving at all. And if one were to create a set celebrating 90 years of Mickey Mouse, is there really a set more appropriate than a recreation of the S.S. Willie?

There’s a good chance that Steamboat Willie is no one’s favorite Mickey Mouse short. It’s basically a show-off piece for 1928 for how sound could be integrated into a cartoon. That’s why a large section of the sub 8 minute runtime is just Minnie and Mickey playing music with farm animals aboard the ship. It’s not without its charms though and it’s probably almost shocking for new viewers to see Mickey chuck a potato at an obnoxious parrot since he’s so squeaky-clean by today’s standards.

Sadly, there are no included potatoes for Mickey to hurl at the bird.

The classic steamboat makes for a nice visual when completed. It utilizes colored bricks in the construction, but once completed they’re all hidden preserving the black, white, and gray look. Some silver accents are used in the lettering which is a nice touch. It probably goes without saying, but this isn’t meant to actually float on water which is why it’s actually on wheels. As the set is pushed along a hard surface, the dual paddles spin and the smokestacks move up and done as they do in the cartoon. The mechanism for the smokestacks is essentially free-floating atop the axles so it’s not always a smooth motion and for mine the rear stack moves while the forward one does not. If I messed around with it I could probably get it to function better, but it’s not something I’m all that concerned with.

The build is simple and fairly painless. About the only thing I found annoying was clipping on the rear and the bow of the ship as it was hard to do without disturbing other pieces already in place. The paddles also weren’t a ton of fun, especially for someone like me recovering from a recnet hand injury. Still, it wasn’t a long build which is to be expected of a set with only 751 pieces in it. I spread it out over three nights as my 4-year-old likes to “help,” but I’d guess I could have put it together in just a couple of hours if I was prioritizing speed, though I often take a leisurely approach to Lego sets. It’s the journey, not the destination. 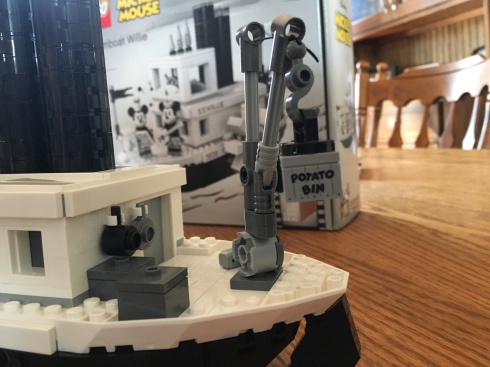 The crane adds a bit of fun to the set.

The set features a working crane on the rear of the ship which also includes actual black thread. Threading it is not the most fun and takes me back to Home Ec class, but it’s hard to imagine it working much better if done differently. The crane can pick up blocks and there is a specified potato bin for just that, harkening back to the closing scene of the short. Other necessities include the bell and the trio of whistles atop the boat. Some of the noise-making equipment is present as well including a mallet, bucket, and a pair of pans clipped to the exterior of the cabin. The short includes many animals, but the only one included here is the parrot, who looks more like a standard bird. The goat does get a shout-out via Minnie’s sheet music brick which includes a graphic of the happy goat, a nice tough added by Lego graphic designer Crystal Bam Fontan.

Rear of the stand.

Two mini figures are included with the set, and it’s probably no surprise to find out the figures are Mickey and Minnie. They’re both done in black, white, and silver to make them seem a touch “special.” Standard black and white versions are to follow in the mini figure wave in May. These are basically repaints of the other Mickey and Minnie figures from a few years ago only now Mickey has a captain’s hat that fits into a peg hole on his head and Minnie has her classic hat in place of a bow. Minnie does not feature her top from the short and her skirt is polka-dotted instead of plain. She comes with a ukulele which is a fun little piece that she’s able to hold with relative ease. There’s also a little Mickey head backdrop/platform included. It’s a simple and elegant touch and it can be propped up or placed flat on a surface for the characters to stand on.

This is a nice set, but this is also the part where we discuss what’s missing. The general look of the ship is preserved, though the construction cheats a bit. There’s no access for the cabin, both the lower and upper portions. No stairs, and the doors are intentionally blocked as the interior of the set was needed to house the guts of the smokestack mechanism. Mickey can fit into the bridge with the steering wheel, but it’s not easy and you’re better off removing the top first if you want to make him grip the wheel. Perhaps a hinged-top should have been included, but maybe that didn’t look right. I’m also a little disappointed there’s no Pete included, since we haven’t received a Pete figure yet. And like Minnie and Mickey, they could have slotted a repaint of him into the upcoming mini figure wave. I’m guessing he’s not here because the set wanted to celebrate Mickey and Minnie, but damnit, Pete has feelings to!

The past meeting the present.

At a suggested retail price of $90, Steamboat Willie is a bit on the pricey side given the size of the set. Some extra cost is to be expected with anything Disney-related and I think the price is also meant to reflect that this is more of an adult, collector, piece than a toy. Sure, a kid would have some fun pushing this boat along and playing with the crane for a bit, but some parts are a touch fragile and really there are better boat sets out there if play is what you’re after. I have a fairly extensive Disney collection, so this set was a no-brainer for me. The $90 price tag is probably about the limit of what I would want to spend on such a set, and I’m mostly okay with it. Hopefully there are more fun Disney-related sets for Lego to consider and I expect something equally fun for when Donald Duck hits 90. He is the superior character, after all.

This entry was posted on Friday, April 5th, 2019 at 11:42 am and tagged with lego, lego ideas, mickey mouse, mickey's 90th birthday, minnie mouse, steamboat willie, ub iwerks, walt disney and posted in Film, toys. You can follow any responses to this entry through the RSS 2.0 feed.
« Batman: The Animated Series – “The Lion and the Unicorn”
Batman: The Animated Series – “Showdown” »