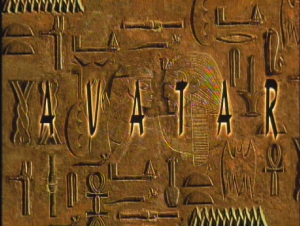 Episode 69 (nice) brings us the surprising final confrontation between Batman and Ra’s al Ghul in this series. It won’t be the villain’s final appearance, but he will not tangle with Batman again, at least not to this kind of degree. He does appear in Superman and Batman Beyond, so this isn’t the end for him in what is now referred to as the DC Animated Universe. The character has such a presence though that it still surprises me that his mark isn’t felt again, but maybe that is due to him being a difficult character to write. He’s one of the few villains in this series that really breaks reality with magic and mysticism and all of that stuff. And this episode is really going to push the series into more fantasy than we’re accustomed to seeing.

This explorer has a pretty distinct haircut…

“Avatar” begins in the past at an archaeological site somewhere in Egypt. An Anglo explorer is descending into an open tomb while natives around him work at the site. He’s handed a lantern by a young boy and vanishes into the hole (which appears to change shape more than once) via a rope. Inside, he sees various artifacts but his attention is drawn to a door which begins to emit an eerie glow. At ground level, the rope is pulled from the hands of those securing it. They regain control and try to pull the explorer up, but the only thing that returns is the end of the rope.

In the present, Lucius Fox (Brock Peters) and Bruce Wayne are visiting an exhibit at a museum. It seems Bruce has recently donated several artifacts to the display, including half of the Scroll of Osiris which is the oldest Egyptian document known to man. Bruce seems to be feigning indifference and making more of an effort to play-up his millionaire party-boy persona than he typically does which I appreciate as Bruce Wayne has mostly embodied a squeaky clean image in this show. That night, a thief is shown sneaking into the museum and targeting the fabled Scroll of Osiris. Batman, for some reason, is there to confront the thief and is able to unmask him revealing him to be Ubu (George Dicenzo), Ra’s al Ghul’s bodyguard and right-hand man. Ra’s (David Warner) himself then emerges from the shadows and attacks Batman in an unconvential manner by throwing a cobra at him. Batman is bitten, and the venom coursing through his body weakens him enough to allow the villains to escape. Batman, perhaps in the most “Bat Shark Repellent” moment of the show, just so happens to be carrying anti-venom on his person and is able to administer it.

At the Batcave, Batman is able to research the species of cobra Ra’s utilized, but it doesn’t provide any concrete leads. After conferring with Alfred, Batman elects to seek out the one person in the world who may know what Ra’s is up to:  his daughter Talia (Helen Slater).

Since the apparent death of her father, Talia has spent her time in Gibraltar. As Bruce Wayne, Batman journeys there to find her. He encounters a surprised Talia who claims to have no knowledge of her father’s state of being alive. She claims that he has not attempted to contact her, and Bruce seems willing to believe her. Talia does, however, know why Ra’s would steal that particular item from the museum:  he’s in possession of the other half of the Scroll of Osiris. Talia explains that the scroll is actually a map to the tomb of an Egyptian Queen by the name of Thoth Khepera and Ra’s has been obsessed with locating it. Why he is so obsessed with this particular tomb is unknown to Talia, but she suggests their best course of action is to head to a secret lair of Ra’s al Ghul in Cairo.

Bruce and Talia wander the streets of Cairo until arriving at a shop. Bruce is dressed like a tourist and looks like a pretty big geek, but I guess he thinks he looks cool. Using an ultrasound device, he and Talia locate the secret entrance to the lair in a shop. The shopkeeper notices, and he sicks some goons on them that are no match for this particular duo. Inside the lair, the two find the completed scroll and Ra’s al Ghul. He’s apparently learned nothing from his previous encounters with Batman and explains why he wants to find the tomb. It is said that Thoth Khepera holds the secret to life and death (seems weird that she’s in a tomb then, but whatever). After his explanation is finished, a glass case is dropped over Bruce and Talia designed to kill them by depriving them of oxygen. Again demonstrating that he’s a slow learner, Ra’s leaves the two to their demise to presumably head to the tomb. This trap isn’t going to be the thing that kills Batman though, and he uses the same ultrasound device he utilized earlier to create enough vibrations to shatter the glass. Miraculously, Bruce and Talia avoid being horribly cut by the glass shattering all around them.

Now I see why Ra’s wanted to find this Thoth person.

This is now a job for Batman! Now in costume, he and Talia follow the map to the tomb and head in. It’s clearly the tomb we saw in the flashback to start the episode. Unknown to them, Ra’s and Ubu actually watch them enter possibly hoping they spring any traps that could be in place. Batman and Talia arrive at the sarcophagus, and that’s when Ra’s and Ubu show themselves. Perhaps unwisely, Ra’s orders Ubu to open it, but he only finds more scrolls that are so old they appear useless. Ra’s and Ubu brought thugs with them, and they set their attention on Batman and Talia who decide this is no place for them. While that fight goes on, Ra’s frets over this apparent dead-end, but then discovers a lever near the sarcophagus. Upon tripping it, he finds the real tomb of Thoth Khepera below. 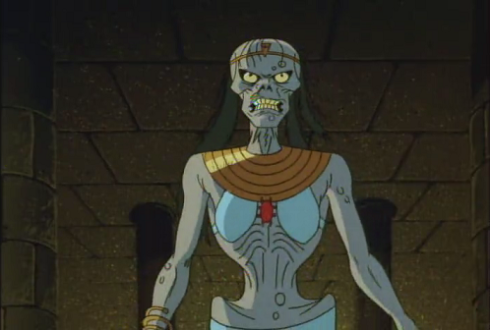 Well that took an unexpected turn.

Inside the tomb, Ra’s finds a glowing green pool and many, many, skeletons scattered about. If the liquid in the pool is the same as what is in his famous Lazarus Pit, I’m not certain, but it seems like a fair assumption. Suspended above the pool is Thoth Khepera (Nichelle Nichols) herself. She appears youthful and beautiful and beckons to Ra’s to come to her if he wishes to gain her knowledge and the power of the gods. This proves quite tempting to Ra’s and he does indeed approach. The two embrace with a long kiss. As the camera pans around the duo, Thoth Khepera goes from being a beautiful woman to a withered hag. Ra’s is horrified, but is unable to pull himself away as Khepera drains the life from him leaving him withered and old.

Batman and Talia burst in and are able to interrupt the process, saving Ra’s for now, but incurring the wrath of Thoth Khepera. The lich summons forth tentacles from her creepy pool which attack Batman and Talia. Batman fends them off, while Talia is able to retrieve her father’s withered body. Thoth summons more enemies to fight Batman, who counters with a rare grenade that proves ineffective against Thoth. Seeing no alternative, he forces a collapse of the temple which is apparently enough to “kill” Thoth Khepera because the result causes Ra’s al Ghul to return to his normal state.

Batman gets to fend off some gross tentacles.

Outside of the temple, Batman is cleaning up the mess and securing his new prisoners:  Ubu and Ra’s al Ghul. Apparently he is not interested in the others who attacked him, or they perished in the temple. Ra’s demonstrates his wily nature by forgiving his daughter, most likely knowing that appealing to her loyalty to him is his only way out of this current predicament. And it works. When Talia asks Batman what he intends to do with Ra’s, he responds by saying he’ll bring him to the proper authorities where he’ll have to answer for his crimes. Talia pulls a gun on him, and then sets her father free. She forces Batman from his horse, and the villains depart. As a showing of apparent respect, Ubu tosses Batman a canteen of water while the caped crusader vows there will be another time to settle this (and as we mentioned in the opening, there actually won’t be in this series).

“Avatar” is the anticipated follow-up to “The Demon’s Quest,” a fairly compelling two-parter that seemed to imply that Batman and Ra’s al Ghul were destined to continue this dance for sometime. It’s not a particularly successful follow-up though, as the messy plot takes a lot of shortcuts and ends up relying on Batman’s misplaced trust in Talia once again, which seems like the kind of mistake Batman normally learns from. “Fool me once, shame on you, fool me twice, shame on me,” is the end message here for Batman. The added supernatural elements feel misplaced as well for this series and just aren’t as compelling as the more grounded threats in most episodes.

You have to stop trusting this one, Batman. I know she looks amazing, but come on!

Studio Junio handled the animation for this episode, and they left their own mark. Bruce Wayne has some unique looks, including a dark suit when we first see him. The villains have a slightly different look to them as well, though it’s not particularly dramatic. Where the episode really distinguishes itself is in all of the subterranean scenes in the tomb. When Batman enters dark areas, he usually has a black and blue color scheme, but in this episode they actually went with brown accents. It gives the scenes a very earthy look to them. The special effects utilized are also well-done, and Thoth Khepera is quite unsettling for younger viewers. It’s just a shame the content of the episode doesn’t live up to the impressive visuals.

Ultimately, “Avatar” is an episode I want to like, but it’s not one I can get behind 100%. It’s not a bad episode, just a bit disappointing considering what it had to follow in “The Demon’s Quest.” Ra’s al Ghul seems too conventional, even if the plot machinations are unconventional given their fantastic nature. The Talia swerve is too predictable, and Ra’s insisting on being a cliché of a villain is exhausting. The visuals save it some since they’re quite far removed from what we’re used to seeing stylistically and in the various locations the plot takes us. It’s odd that the villain and Batman never clash again in this series given the conclusion. The two will cross paths in a few episodes, but in that episode Ra’s al Ghul is more of a vehicle to tell the tale of another character and only really crosses paths with Batman at its conclusion. Season 2 was a bit of a surprise so I can’t imagine they were holding out for a third season, even though one would be requested years later. The fact that he wasn’t dealt with there is also surprising, but as I mentioned he does show up in Superman. The writing in this episode leads me to believe that the staff wasn’t sure what to do with Ra’s al Ghul, so it opted to just leave things here. Perhaps it’s an unsatisfying end to the conflict with Batman, but if the staff did feel that way then it’s probably better than forcing the character into a plot that doesn’t serve him well.

One response to “Batman: The Animated Series – “Avatar””