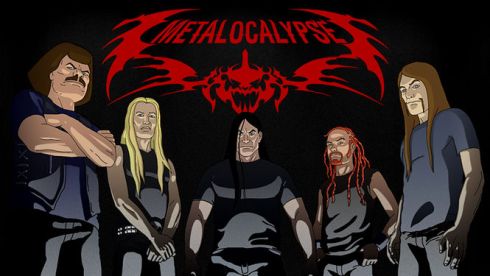 A show that felt like it was made for, Metalocalypse was an animated show on Adult Swim about a fictitious death metal band and their misadventures. And yet, it was a show I could never get into. It began in 2006 as I was exiting college and heading into “the real world” in which I had a brutal commute and long working day. As a result, I was forced to abandon my night owl lifestyle which meant I missed out on a lot of the Adult Swim programming that began during this era. Even when things calmed down for me and I attained some normalcy, I never really returned to Adult Swim for no particular reason and I slept on this show, despite numerous friends telling me it was something I needed to watch. I saw an episode here and there, it just never stuck. It was also kind of annoying to watch on cable since the script for each episode is loaded with profanity so there’s a constant stream of bleeps when shown on television. This is a show best enjoyed on either home video or via an uncensored streaming platform.

“Dethmas” originally aired December 6, 2009. Unlike a lot of these simply animated programs on Adult Swim, Metalocalypse is a half hour formatted show (for season 3 only). It was the brainchild of Brendon Small, a musician himself who is probably best known for the show Home Movies, and Tommy Blacha. Only someone familiar with the European metal scene could dream up this show, and it’s pretty incredible that it received a green light from Cartoon Network given how niche the subject matter is. It ended up being one of the longer running shows for the network, finally coming to an end in 2013 with a one-off special. In total there were 63 episodes produced, and this episode was part of the show’s third season. 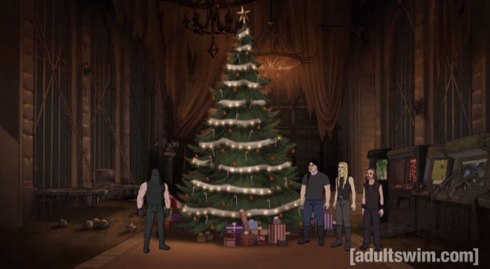 Christmas is coming for Dethklok.

The show opens with the band watching television. They’re watching the news (and the anchor is voiced by Mark Hamill) coverage of their “friend” Dr. Rockzo (Tommy Blacha) who has been arrested for stealing from a homeless charity to fund his cocaine addiction. Dr. Rockzo looks like an 80’s David Lee Roth if Roth were a clown strung-out on cocaine. Toki (Blacha) is given some grief by his band mates over his friend’s relapse, but Toki is quick to point out he’s severed all ties with the clown. The conversation then shifts to the upcoming Christmas holiday, and William Murderface (Blacha) wants to put on a Christmas special, but the rest of the band tells him that’s lame. He gets pretty pissed off and vows to go it alone. Nathan Explosion (Brendon Small) reveals that their moms sent them a DVD for Christmas, and the band reluctantly watches it. It’s pretty easy to tell which woman on the video is related to which band member, with the most obvious being Murderface’s grandmother who looks exactly like him except she’s obese and rides a scooter. Murderface is quite taken by Skwigelf’s mother, a buxom blonde who briefly exposes her undergarments Sharon Stone-style. The video ends with the revelation that the moms are coming for Christmas, and the band is not happy.

The Dethklok mothers, and one grandmother.

The band is then shown lounging in a hot tub still complaining about their mothers and Christmas. We’re shown a brief montage of what happened last time the ladies visited, which apparently included a drunken game of Twister. They vow to not let their moms drink this time. Murderface then meets with his business partner, Dick Knubbler (Small), and he’s not happy that the rest of the band won’t be joining them. He informs Murderface that he won’t have any creative input, and when asked why, he lists out other failed business ventures by Murderface which included exploding pyro devices and a cologne of his own urine. They need to secure some financing though, and it’s going to be hard with just Murderface. 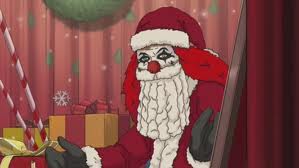 Dr. Rockzo is also shown being released on bail. He’s told to stay out of trouble and get a job. Conveniently, Toki, being the only member of the band who seems to love Christmas, heads off to the mall to see Santa and that’s just where Dr. Rockzo ended up getting a job (as Santa). Rockzo is able to get Toki to take him back to the home of Dethklok where he continues to go through cocaine withdrawals. Murderface also receives a phone call from Knubler letting him know his proposed ideas for the special (he wanted tits and murder) have been rejected. Worse news, they only found one sponsor:  The Christian Church. When Murderface questions if aligning himself with the Church would be considered selling-out, the various yes-men on the line suggest it’s fine and he cheerfully goes along with it.

The mothers have also arrived, and no one is happy. The moms want the boys to take them shopping, and we get a brief sequence of Explosion trying to find a parking space at the mall which ends in a car accident. Meanwhile, Dr. Rockzo has escaped and has managed to score some cocaine. He happily prances around the park announcing his score to the world while waving his drugs around in a plastic bag until he runs into a cop. 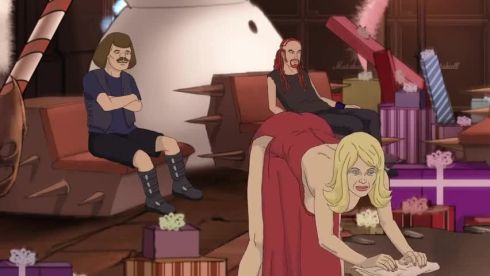 Murderface doesn’t seem to mind at least one of the Dethklok moms being there.

Murderface and Knubbler are forced to meet their sponsor, an unnamed priest voiced by Small. He wants to put on a very Christian production and Murderface appears more onboard than Knubbler who can’t stop swearing in the priest’s presence. When he returns to the homestead, he finds his band mates in Christmas sweaters completely miserable. This allows Murderface the chance to convince his bandmates to join the special with him as it’s something they can do with their mothers to get them off their backs. He also claims it will be brutal, which is a blatant lie, but is needed to get Explosion onboard. We then get a montage, framed by Rockzo’s coke habit, of the band and their moms getting ready for the special. A lot of the images show the band forcing their moms into manual labor to get the set constructed.

This will not go well.

When the special arrives, it’s actually a fairly wholesome experience. Hosted by Murderface and Knubbler, they do the nativity in which the baby Jesus defecates repeatedly and the audience seems to enjoy the impromptu poop jokes. The priest seems pleased as well, and the scene shifts backstage where Murderface’s grandma is on the hunt for booze. She finds a door comically chained and locked and claims to smell alcohol behind it. Rockzo is also there, and he’s managed to gain access to the backstage area. Toki, getting ready for his prized Secret Santa portion of the special, finds all of his gifts are gone and he immediately blames Rockzo. Meanwhile, the rest of the band is watching the special unfold on live television from the green room, and Explosion sees who the sponsor for the show is and immediately gets pissed.

At least Dr. Rockzo got to enjoy himself.

On set, Murderface and Knubbler are dressed in tuxedos and are seated in a living room setting. A knock on the door prompts them to speculate on what surprise awaits them on the other side, in true corny Christmas special fashion. It’s the mothers, and now armed with booze are completely smashed. They stumble onto the set rather clumsily. Explosion is next, and he simply punches Murderface in his murder face and drops an f-bomb, which does not go over well with the priest. The other band mates storm in and they’re just as pissed, and Dr. Rockzo is there as well. He collapses onto the couch and Skwigelf’s mother begins giving him a handjob. Toki also gets crushed by a giant cross on set along with Murderface’s grandmother, which Murderface seems to enjoy. With the whole special in disarray, the priest attacks Murderface and begins choking him out as Knubbler is forced to hastily wish everyone a Merry Christmas.

“Dethmas” is a silly Christmas special, which you probably expected. It seems absurd for this show to even have a Christmas episode, but the setup works and it’s amusing to see the band get suckered into a Christmas production. It’s a very crass special, with tons of profanity and even the other F-word is used at one point, which surprised me. The context was that Murderface and Knubbler looked “sissy” while hosting their special. It makes sense in that context, since it’s coming from an aggressively macho metal band member, though I do wonder if it would have been used if recorded today. Rockzo and his cocaine addiction also gets a lot of play for laughs, though by the end of the episode I was mostly over that. Him getting a handjob during the special though made up for it, as that visual was quite amusing. I’m guessing Adult Swim wouldn’t let them get away with animating anything more salacious, such as oral sex, as the positioning of the characters suggests maybe that’s what they originally intended to have happen. 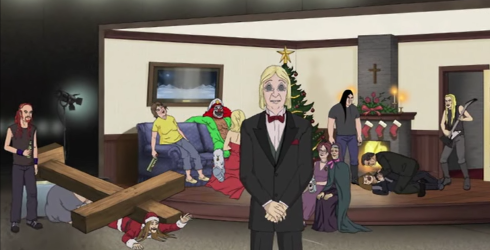 Not the ending shot the Christian Church was banking on.

I did enjoy the portrayal of each band member and their response to the holiday incoming. Toki was the cute one who genuinely likes Christmas and Santa and all of that stuff. He just wants to give his buddies gifts and be merry. Meanwhile, Nathan Explosion hates Christmas, but he also keeps finding a silver lining in the holiday suggesting the Christmas Spirit could be a murderous ghost or something. Pickles (Small) and Skwigelf mostly can’t be bothered with the holiday, though their attitude towards it is closer to Explosion’s. Murderface just wants to make money off of it and enhance his star. As the least charismatic member of the band, it makes sense that he always has an inferiority complex and is willing to sell-out for additional fame.

If you think your holiday needs a satirical dose of Heavy Metal, then “Dethmas” should do fine. It’s actually fairly light on music, but the atmosphere is still there. It’s also easy to come by. If you just want to stream it, Adult Swim will let you watch it on YouTube for a couple bucks. You can also pick it up with the rest of Season 3 on DVD. If you go that route it will probably set you back around $25 if you want it new, less if you’re willing to go used. You can also purchase it digitally through Amazon for $2.99 an episode. There’s also the chance Adult Swim airs it this month. The network is usually pretty good about airing its Christmas Specials though it favors shows still in production so it could get passed over. If you want to see this one though, you have no shortage of options.

This entry was posted on Monday, December 17th, 2018 at 1:35 am and tagged with adult swim, brendon small, cartoon network, christmas specials, dethklok, dr. rockzo, nathan explosion, tommy blacha, william murderface and posted in christmas, Television. You can follow any responses to this entry through the RSS 2.0 feed.
« Dec. 16 – Mickey’s Christmas Chaos
Dec. 18 – I Am Weasel – “Happy Baboon Holidays” »