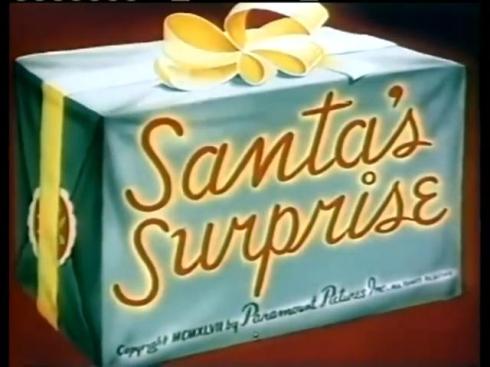 Cartoons were a pretty big deal at one point in time. Any studio that wanted to be thought of as a major studio had its own animation division and its own characters. Everyone knows the big ones from Disney and Warner and then after them I suppose the next biggest was MGM with Tom & Jerry, as well as others. Eventually animation became less important as television invaded the homes of people all around the world. No longer did customers heading off to the movies expect a newsreel, cartoon, and feature and the cartoon short started to disappear. Now it’s largely a novelty and a bunch of the lesser ones have slipped into the public domain. 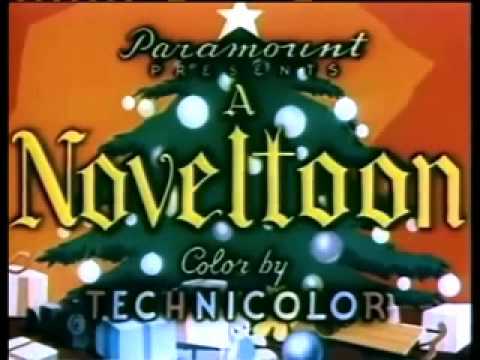 Of the many cartoons that appear to be floating around in the public domain, it would seem a lot belong to Paramount Pictures. They were there early as well, with the likes of Betty Boop and Popeye, but they scrambled for stars in the 40s and 50s. This was a time when the short was fading, and even Mickey Mouse had all but been retired. One of the studio’s stars during this era was Little Audrey. She was basically a replacement for the more popular Little Lulu character that Paramount declined to keep licensing. I wouldn’t say Little Audrey is a total rip-off of the Little Lulu character, but there are certainly some similarities. Paramount was at least smart enough to give her a different voice, and tasked Mae Questel with the honors. Questel is best known as the voice of Betty Boop and Olive Oyl. 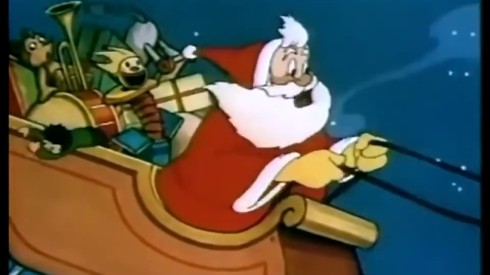 A rather pleasant looking Santa flies around singing to himself on Christmas Eve. The man loves his job.

The debut for Little Audrey is actually not a true Little Audrey cartoon, but she’s the most recognizable face in it. “Santa’s Surprise” is a 1947 Noveltoons cartoon short that depicts some kids giving Santa a present of his own on Christmas. It opens rather simply with Santa flying around in his sleigh on Christmas Eve. Ahead of him, six chunky reindeer pull his sleigh. It hasn’t come up much this year so far, but my biggest Christmas special pet peeve is when Santa is depicted with less than 8 reindeer. I won’t demand they include the 9th, but come on! There has to be at least 8! 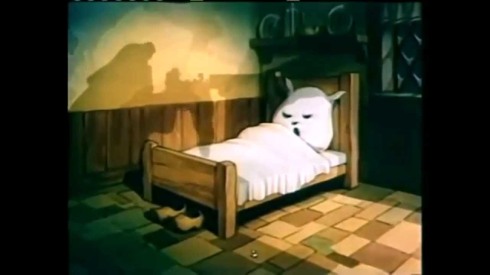 I guess this kid thinks this face on his pillow is enough to fool Santa. Looks like it worked.

As Santa flies around he enters homes to stuff stockings. From under beds and behind blankets little eyes watch his every move. Audrey has the most auspicious debut when Santa arrives at her house to find she cut a hole in her stocking, thus attempting to trick him into refilling it over and over. Santa laughs and it’s clear he’s having himself a good time. He even stops to take note of a little stocking hanging outside a mouse hole and stuffs a wedge of cheese into it. Poor cartoon mice, all they ever get is cheese. 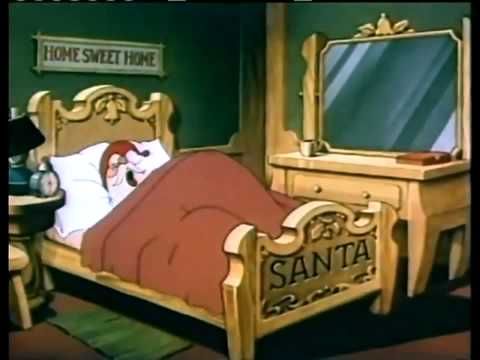 I have my name on my bed too.

With his work done, Santa returns home to the North Pole. His existence in this cartoon actually seems rather sad as his house is empty. No elves. No Mrs. Claus. Just a pile of dirty dishes in the sink. Santa is pretty tired and climbs into bed, though he pauses to wish himself a “Merry Christmas!” in the mirror, which is either cute or just further adds to his depressing surroundings. As he snores away, the tassel on his night-cap billowing with each snore, some eyes emerge from his sleigh. It’s a group of multi-cultural children! They’ve stowed away in Santa’s sleigh throughout the night to reach his home. This is clearly not the same Santa of my youth who was impossible to catch in the act. 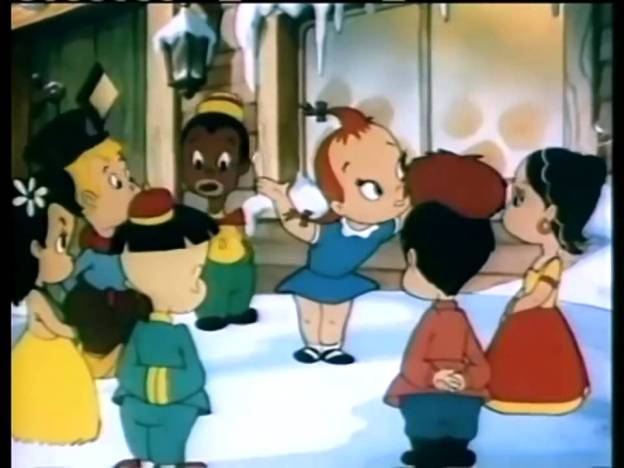 Little Audrey, center, is going to tell these kids what’s up.

The kids all climb out of the sleigh and peer into Santa’s home. They take note of the dour surroundings and decide they should do something for Santa since he does so much for the children of the world. Little Audrey is basically the focal point of the group as she’s the one who suggests they help him out. As the white American of the group, I’m guessing the animators thought no one else could possibly lead this bunch. We get a little word from everyone, and boy are there some uncomfortable depictions here. The little black kid somewhat resembles a white kid in blackface. It’s not good. The Chinese child has tiny slits for eyes and speaks in stunted English. There’s a Hawaiian girl that seems to only communicate in hula and another questionable accent on the Spanish girl. This is 1947, folks! 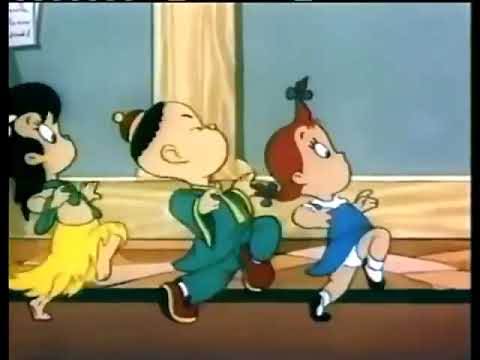 The kids sneak around, until they realize they don’t really have to.

From here it’s a pretty benign little cartoon. The kids sneak into the house and try to keep quiet as they get busy cleaning up the place. One of the boys gets the seat of his pants set on fire and has to plant it in the snow, which is probably the only real physical comedy here. I did find it amusing how they keep insisting on being quiet so as not to wake Santa, and then Little Audrey just starts singing a song as she dusts the place. 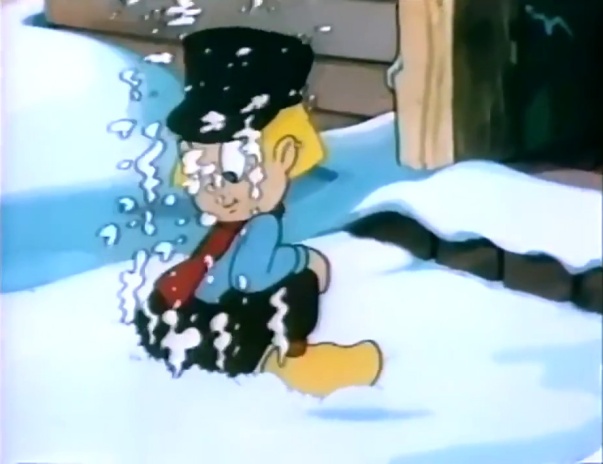 The physical comedy is not high in this one, but a kid does set his ass on fire.

When they’re finished, they leave Santa’s tree decorated and with a present under it. He’s startled and wakes up to find the children have fled, but he sees how clean everything is and finds the present under the tree. It’s a music box with all of the faces of the children on it and there’s a little note reminding Santa not to forget them next year. He gives a hearty laugh, and the short is over. How did those kids get home? I have no idea. 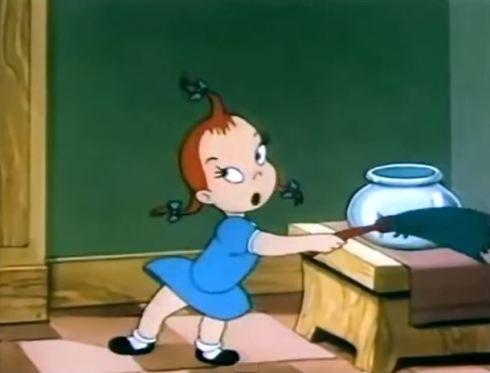 If it weren’t for the dated representations of the other cultures of the children, “Santa’s Surprise” would be a totally boring, but sweet, Christmas cartoon short. It’s got a nice, simple, message about repaying acts of kindness with more kindness. Who is more deserving of a Christmas present than Santa Claus himself? It’s not an unheard of thing, and other shorts and specials have tackled the same and probably have done it better. The Prep & Landing short “Operation:  Secret Santa” is one that comes to mind. While it doesn’t feature children giving something to Santa in thanks, it does feature Mrs. Claus trying to get the perfect gift for Santa.

The absence of Mrs. Claus is also rather bizarre. I don’t know if she is more of a modern staple, but it seems like the concept should have been common in the 40s. After all, she was in the agreed upon very first story about Santa. This completely lackadaisical and certainly jolly Santa Claus is both nice and weird. He really doesn’t seem to care if he’s seen or heard and obviously he doesn’t check the sleigh much. I always do enjoy seeing simple homes from this era depicted in cartoons like the ones Santa visits. Maybe we should just go back to hanging a sock for gifts instead of filling up the underside of a tree? My credit card bills would like that very much. 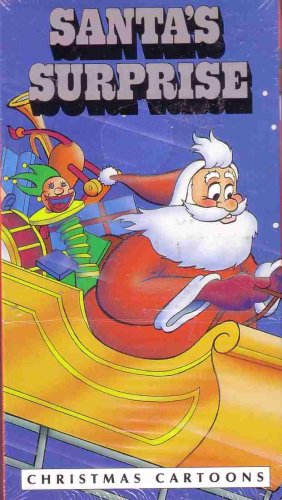 “Santa’s Surprise” has been released a bunch of times on video since it entered the public domain.

Paramount isn’t the most well-remembered producer of animation, and if we’re judging them solely on the quality of their animation then it’s relatively easy to see why. This picture is not on par with what the other studios were putting out. It almost looks like it’s ten years older than it really is. The characters are bit rubbery looking and there isn’t a ton of animation that’s out of the ordinary. It’s far from ugly or off-putting, but you definitely know you’re watching something old. It’s also possible this wasn’t preserved all that well and there could be some deterioration at work here as well. The backgrounds are nice though and there’s a cold, yet cozy, quality to them. There’s lots of wood which means lots of wood grain, but nothing seems too busy or cluttered.

If you want to check out “Santa’s Surprise” and other cartoons that feature Little Audrey, then I actually have some good news. Warner Bros. Home Entertainment has released some restored cartoons from the public domain and “Santa’s Surprise” is included. At least, that’s according to Wikipedia. It claims it was released on October 11 of this year, but I can’t find anything online and it’s not cited. “Santa’s Surprise” has been released on DVD over the years and it’s not expensive. Since it’s also public domain, you can find streams of it online with relative ease as well, including Prime Video. It’s really not worth seeking out, but if you want something light and have a taste for old cartoons then you might get something out of it.

This entry was posted on Tuesday, December 11th, 2018 at 4:51 am and tagged with cartoon shorts, christmas cartoons, little audrey, mae questel, noveltoons, paramount pictures, santa claus, seymour kneitel and posted in christmas, Film. You can follow any responses to this entry through the RSS 2.0 feed.
« Dec. 10 – The Sylvester & Tweety Mysteries – “Feather Christmas”
Dec. 12 – Life with Louie – “A Christmas Surprise for Mrs. Stillman” »