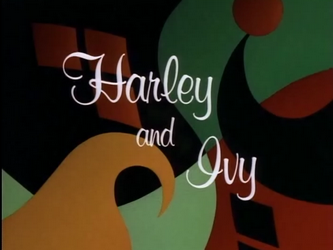 Episode 56 brings us to the end of the second volume of Batman:  The Animated Series. As I’ve mentioned probably too many times though, this is still production season one and we won’t be done with that for several more weeks. This is a pretty monumental episode for the series though, as it’s the first pairing of Harley Quinn (Arleen Sorkin) and Poison Ivy (Diane Pershing). Since Harley was such a break-out star for the show that made the move to print, I suppose anything that added to her character in this series is equally as important. The Ivy/Harley friendship became very popular, and though it was mostly shelved for the rest of the series, it was returned in The New Batman Adventures. It too has made the move to the comics and I’m sure the hardcore fans of the characters are hoping to see it one day captured on the big screen. Not to be lost in the Harley/Ivy pairing is the fact that this episode also further delves into the relationship between Harley and her beloved Mr. J. Up until now, she’s mostly been portrayed as his number 1, but this episode further explores her obsession with Joker and hints that there is a bit more to their working relationship than just boss and henchwoman.

The episode opens like many do with Batman in hot pursuit of this week’s villain. In this case, he’s chasing Joker (Mark Hamill) and Harley in the Batmobile with Harley driving and Joker relaxing in the backseat. Harley is pretty stressed as she tries to escape from Batman while Joker’s feet are propped up and he remarks on how beautiful an evening it is. He, as he often does, snaps between glee and irritation ordering Harley around including making ill-advised suggestions on where to turn. When Harley tries to point out that it might not be a good idea he just gets angry. When his decision turns out bad, he blames Harley. Such is the life of a goon. Joker calls for his gun and Harley hands it to him. Unfortunately, she gave him the gag gun which just fires “Bang!” flags. The opening allows Batman to grapple onto the rear of Joker’s vehicle, but they were prepared for such and Harley is able to eject the rear of the car and escape. 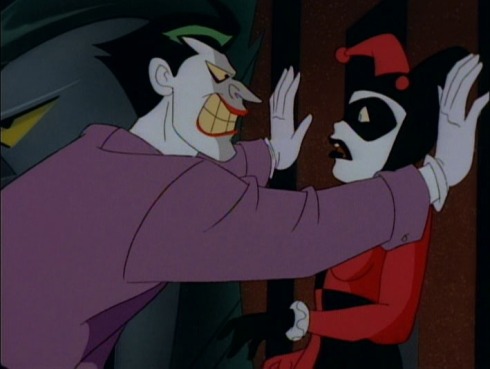 Joker is eager to put the blame on anyone but himself, and poor Harley is his lamb.

Joker and Harley return to their hideout where Joker rants and raves about their encounter with Batman to the other henchmen. He puts the blame for tonight’s failure square on Harley, and when she sticks up for herself he just lays into her worse. He asks if she thinks she’s a better crook than him and it’s enough to actually anger Harley. When she suggests that maybe she is, Joker literally tosses her out of the hideout. Harley shows some defiance and determination, but also some sadness as she leaves her life with Mr. J behind.

Harley sets her sights on the precious Harlequin Diamond which is on display at the Gotham Museum. We get to see just how adept at sneaking and stealing Harley is as she makes her way towards her target, only for the alarms to be set off by another criminal. Poison Ivy is also there and she’s swiping some plant specimens. Irritated by Ivy’s presence, Harley abandons all notions of stealth and just grabs the diamond. She then helps Ivy escape from the police, and the pair use Ivy’s getaway car. 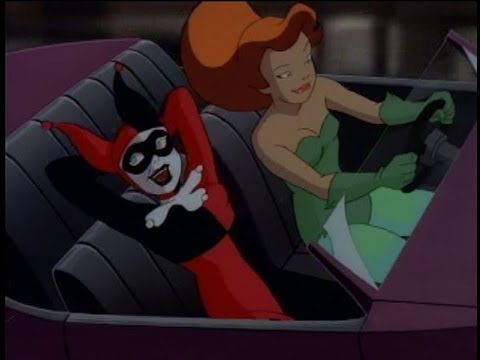 And the pairing begins!

The two flee to Ivy’s hideout, a little house smack-dab in the middle of a toxic waste dump. Ivy is immune to the chemicals in the air and she’s devised a serum that can pass that onto others, the only problem is it has to be administered via injection which does not sit well with Harley. She goes through with it though, and the two have a long conversation about Harley’s relationship with Joker. Ivy, not surprisingly, is well aware of how poorly Joker mistreats her, but nothing she can say makes Harley see the light. Still, the two are eager to form a partnership to take on Gotham as a two-woman crime team.

Harley and Ivy first target a men’s only club before hitting other spots in Gotham. Their crime spree gains media attention and the two are dubbed The Queens of Crime. This is enough to get the attention of two other noted individuals. First up is Batman, who naturally has an interest in putting a stop to any crime spree that occurs in his city. And then there’s Joker. He’s not exactly bursting with pride to his former protegé having success without him, and with Poison Ivy, no less. He wants to be on the front page, and he vows to put an end to Harley’s fun. 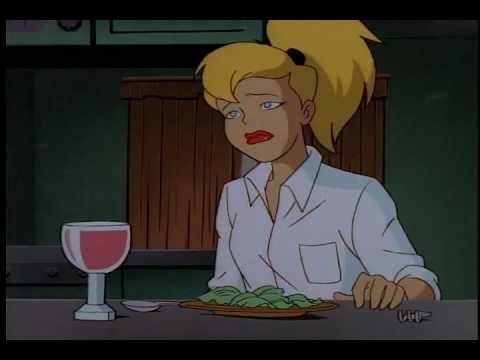 Despite his intentions, there’s little Joker can actually do to slow Harley and Ivy in any meaningful way. He doesn’t know what the two are planning or where they’re hiding out. At least, he wouldn’t if Harley wasn’t homesick for her beloved clown. She secretly phones him from Ivy’s home and he keeps her on the line long enough to trace the call. Unknown to the women, Batman is on to them. He was able to analyze the soil left behind by Ivy’s car and traced it back to the waste dump. Upon arrival he’s attacked by Ivy’s plant guardians and the two women taunt him and chain him to a table. Ivy tries to target Batman’s masculinity by asking if he ever thought he’d be taken down by two women, but Batman won’t bite remarking a sick mind knows no gender. 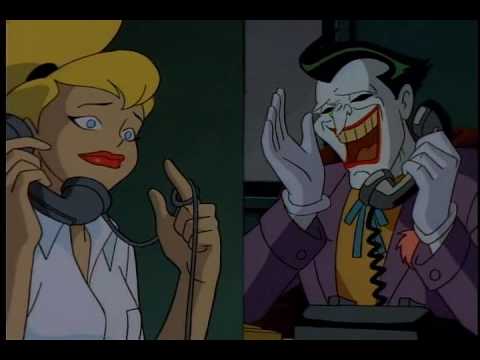 Ivy and Harley dump Batman into some toxic water without his gas mask on. Satisfied, they turn their attention back to the house where a certain clown awaits them. Joker, dressed rather dapper, is acting kind of friendly, but also has his goons scooping up Harley and Ivy’s loot. He’s almost immediately confrontational with Ivy, putting Harley in the middle. He tries to gas Ivy with his boutonniere, but it has no effect on her due to her other toxic immunities. Ivy puts him on his rear, and makes off with an obviously conflicted Harley.

It’s never easy when the old partner confronts the new.

Joker orders his men after them, but they soon run into Batman. Did you think that little stunt with the table would end Batman? Of course not. He wriggled out of it and now he’s ready to knock some skulls. Joker, upon seeing his mortal enemy, whips out a tommy gun and opens fire. Batman points out that doing so is a bad idea since all of the gas in the area makes the place a powder keg, and sure enough, the whole place goes up in flames. Batman is able to take out the Joker following the commotion, while Harley and Ivy flee in their car. As Ivy announces that no man can take them prisoner, the car is taken out by a shot to the tires. The one responsible is one of Gotham’s finest, officer Renee Montoya, essentially proving Ivy right. Next stop for our villains is Arkham Asylum. Harley and Ivy are gardening while Joker is confined to his own cell in a straitjacket screaming about how he’s going to swear off women when he gets out. Despite that, Harley remains hopeful that she and her “puddin'” can salvage their relationship while Ivy reacts with disgust while tossing soil in her face.

In terms of episodes that are just plain fun, it’s hard to top “Harley and Ivy.” A lot of the episode is a Thelma & Louise style joy-ride shared by the two villains. Poison Ivy is depicted as the self-reliant, man-hater type while Harley is just along for the ride. Her good nature, for a criminal, and cheery demeanor inject a lot of personality into the episode. I love the little quirks given to Harley such as her affinity for nicknames be it Mr. J or her preferred name for Ivy, Red. Batman is often reduced to a side character in villain-packed episodes, and he definitely is here. The trio of starring villains leaves little room for our protagonist, but the episode doesn’t suffer. It’s also interesting how the episode essentially gets us to root for Ivy and Harley, though more so Harley. Most viewers probably find themselves conflicted. Joker is clearly an abusive boss who does not appreciate the talents of Harley. Meanwhile, Ivy has her own agenda. I think she is more interested in Harley’s well-being than Joker is, but both are clearly using her for their own benefit. As a result, whom does the viewer root for? It’s a fun conflict and something to ponder.

In the end, they’re foiled by a woman.

This is another Dong Yang animated episode, and it looks and animates rather well though there are more errors than usual. There are a few continuity errors and one scene where the characters’ faces actually disappear. There are plenty of fun scenes though and I like the bits of home life shown between Harley and Ivy. It’s cute, like something you’d see in a film set in college or something. Harley, missing Joker, also manipulates the food on her plate to resemble his face.

As I mentioned in the opening paragraph, the Harley and Ivy pairing has been a pretty big success for both characters. They’re paired up often in the comics with many fans seemingly wanting to see the two as more than just a partnership, and DC even gave them what they want. The writers on the show would recognize how popular Harley had become and she gets multiple episodes centered around her in season two, though the pairing of these two isn’t really utilized again until The New Batman Adventures. Similarly, Harley’s relationship with Joker remains strained for the rest of the series. Aside from the episode “Trial,” where all three villains are involved in a plot with basically every reoccurring villain, they remain at odds with each other. A lot of Harley’s madness and her good side are explored in season 2 as their eventual make-up is put on hold. For a show that isn’t too concerned with continuity, it’s nice to see this fracture in their relationship isn’t something that’s just glossed over and reset for their next appearance.

This entry was posted on Friday, October 19th, 2018 at 12:06 am and tagged with arleen sorkin, batman, dc comics, diane pershing, harley quinn, mark hamill, paul dini, poison ivy, the joker and posted in batman the animated series, Comics, Television. You can follow any responses to this entry through the RSS 2.0 feed.
« Batman: The Animated Series – “The Mechanic”
Batman: The Animated Series – “Shadow of the Bat – Part I” »

One response to “Batman: The Animated Series – “Harley and Ivy””