The 7th Dragon Ball Z feature film boasts another famous debut, that of Future Trunks, to the world of DBZ films. The last film brought in his father, Vegeta, which kind of played up the notion of there being two Super Saiyans. Well, what’s better than two Super Saiyans? Three, obviously! Even the Japanese title for this film goes right for that little tidbit, while the English version is once again content to just tell us who the villain is going to be. And since this film came out during the heart of the Androids/Cell Saga, it’s probably not surprising that the villain is going that route. Since the anime gave us an Android 20, the inventor Dr. Gero himself, without listing every android between 1 and 20 it left Toei with a lot of room to make new characters following that numeric assignment. I believe the regular series only gave us androids 8 and 16-20, though I could be forgetting some from the Dragon Ball era. This film is going to present to us Androids 13, 14, and 15 and they’re certainly different in terms of styling, which we’ll get to. Let’s get down to business though.

Goku out of his element.

The movie opens with a flashback to the murder of Dr. Gero (Ed Marcus) at the hands of Android 17. It’s re-animated and not just the same footage we’ve already seen from the show and it’s slightly more graphic. As Dr. Gero’s blood oozes into the floor the camera pans below to reveal a hidden super computer buried under the laboratory. Three nearby, human-sized pods emblazoned with the numbers 13, 14, and 15 are shown and it’s more than a little ominous. After the opening credits, Krillin (Sonny Strait), Oolong (Brad Jackson), Master Roshi (Mike McFarland) and Trunks (Eric Vale) are shown standing in line for a beauty competition in a super mall. They’re the only ones in line, and Trunks, dressed in his debut Capsule Corp jacket complete with sword, is kind of just along for the ride. Oolong and Roshi are quite eager to see some babes, while Krillin is at least trying to play it cool, but he’s not fooling anyone. Goku (Sean Schemmel) is there shopping with Chi-Chi (Cynthia Cranz) and Gohan (Stephanie Nadolny) and having a pretty miserable time of it, until they decide to get some lunch. 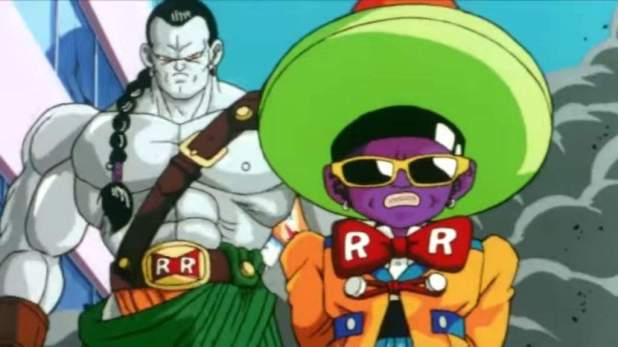 The somewhat problematic Androids 14 and 15.

Once seated, they’re joined by the others who were previously waiting in line, but found out they were there on the wrong day and wasted their time. While the heroes dine, two individuals enter the city and start calmly strolling through while also blasting everything in sight. They’re an interesting pair. One being, a short guy with purplish skin and an outlandish outfit and a tall guy with pale skin who has kind of an Indigenous American look to him. They’re silent, and head straight for the restaurant the main characters are dining at. Eventually, the commotion reaches them and Goku and his friends are forced to evacuate all of the patrons and waitstaff as they initially think a mega earthquake has just struck. They soon encounter the ones responsible who introduce themselves as Androids 14 (Ed Marcus) and 15 (Paul Bandey). Like the other androids, they exist to kill Goku due to Dr. Gero’s vendetta against our hero. Goku, never one to back down from a fight, invites the duo to follow him to a more remote location away from all of the innocent people.

This movie marks the film debut of Trunks.

Goku leads the androids to an arctic area. Trunks follows and Gohan and Krillin aren’t far behind. Goku and Trunks pair off against the two androids and they more than hold their own without having to even resort to their Super Saiyan states. That is, until Android 13 (Doug Rand) shows up. Sporting a mullet haircut and a trucker hat, 13 introduces himself and explains how the trio came into existence. He has a bit of a righteous tone, while speaking with an American southern accent (Trunks even refers to him as a redneck) and vows to kill everyone. Outnumbered, Trunks and Goku find themselves struggling until Vegeta (Christopher Sabat) decides to show up. Citing his now tired explanation of wanting to be the one to end Kakarot (Goku), he goes after Android 15 while Trunks takes on 14 and Goku 13. Eventually, all three power-up to their Super Saiyan forms and immediately the tide begins to turn. 14 and 15 appear to be no match for a Super Saiyan, but 13 is still able to put up some resistance against Goku. Gohan tries to get involved, which just necessitates a rescue from his guardian angel Piccolo (Sabat).

Android 13 sees the value in wearing a vest, but apparently not shirts.

Trunks and Vegeta are able to defeat and destroy their opponents, leaving only 13. Goku and Piccolo have teamed up and are beating him down, but 13 has an ace up his sleeve, or he would if he had sleeves. Components from the defeated 14 and 15 float up and merge with 13, causing him to transform into Super Android 13. His skin takes on a purplish color, while he gets orange Super Saiyan-like hair while significantly increasing in mass. Vegeta tries to arrogantly take him on solo and is dispatched rather quickly. The others give it a go, but Android 13 is just too powerful in his new form. 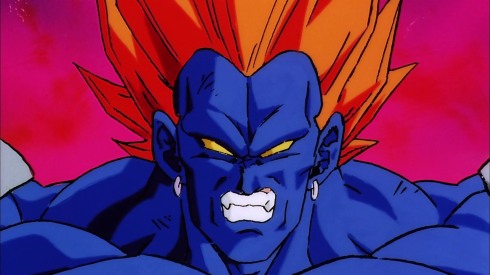 Behold! Super Android 13! He kind of looks like a rejected Blanka design.

You probably know what that means. Goku is going to have to power-up a Spirit Bomb attack if they want a chance at defeating 13, which means the others will have to stall for time so Goku can properly form the attack. That’s how the rest of the film unfolds, with the others being severely out-classed by 13, but still finding enough resolve to keep him away from Goku. Toei does introduce a little wrinkle this time into the Spirit Bomb attack, one that kind of goes agains the canon rules of the attack, but it’s not really a big deal. It’s not enough of a swerve to prevent the maneuver from feeling tired at this point, but it’s an ending.

Super Android 13! is basically just one long fight. Most of the films are light on plot, and there’s something to be said for just getting to the action as quickly as possible, but this one may be too focused on that. The designs of these new androids feel very “ethnic.” Japan doesn’t have the same racial hang-ups America does so they probably don’t care, but it is weird to see this white, redneck guy bossing around what looks like an African American pimp and Native American. Not only does he boss them around, he’s demonstrated to be superior to them in design. It’s an uncomfortable observation to make, though I honestly don’t think it had any impact on my enjoyment of the film.

Even ignoring those racial implications, the designs of the androids are kind of lame. 14 has little character, though 15 is definitely a sight. He has a loud design and his giant hat and sunglasses are kind of in-line with Akira Toriyama’s sense of humor, which makes sense since he designed them. Android 13 is kind of just stupid looking, and his super version is arguably dumber, but at least it’s intimidating. The arctic setting is a welcomed return though as I enjoyed it way back in the second film, The World’s Strongest. Here they don’t really play up the elements much, but it looks nice.

Looks like our heroes will need to find a quick way to power-up if they want to defeat this guy. Gee, I wonder what that means?

For this dub, it feels like Funimation took more liberties than usual. 13 mocks Trunks’ haircut as a “$30 haircut,” which doesn’t make sense since there’s no such thing as dollars in DBZ. He has a righteous attitude, as opposed to just wanting to kill Goku, and mocks humanity’s abuse of free will. In his powered up form, he’s prone to cursing when in the Japanese dub he mostly just growls. There’s also the previously mentioned “redneck” line and an instance where dialogue was added in place of silence. It’s during the closing moments when Piccolo and Vegeta are seated on a floating piece of ice. I’m actually not complaining because their brief exchange is kind of funny. This isn’t the last time those two will share a scene to close out a feature. 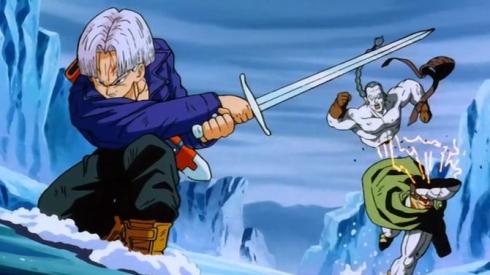 Since Trunks is in this one with his sword, that means they have to do that delayed split-in-half thing after he charges at an enemy.

Ultimately, Super Android 13! is not one of my favorites. The action is just okay, there’s not a lot here we haven’t seen before, and the pacing of the fight is quite redundant with other movies. The setup is even less interesting, though at least the brief moments with our resident perverts is kind of amusing, and it’s always enjoyable to see Goku living a more suburban life and reacting to it. Visually the film is fine and it’s on par with the better movies. There aren’t many animation shortcuts and the picture is bright and vibrant. The snowy landscape helps to make the fighters stand out against the backdrop, though there is an absence of really big, flashy, attacks outside of the underwhelming conclusion. In short, it’s fine, but Toei can do better.

This entry was posted on Monday, August 6th, 2018 at 12:26 am and tagged with akira toriyama, android 13, android 14, android 15, dbz, dr. gero, funimation, goku, super saiyans, toei, trunks, vegeta and posted in Dragon Ball Z Movies, Film. You can follow any responses to this entry through the RSS 2.0 feed.
« Batman: The Animated Series – “Terror in the Sky”
Ranking the Many Versions of The Teenage Mutant Ninja Turtles »