Batman: The Animated Series – “Moon of the Wolf” 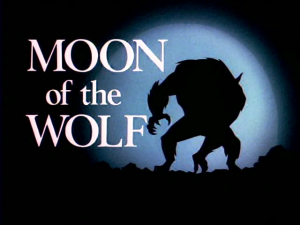 Something happened in-between episodes 42 and 43 that feels like a big deal, to me anyway:  we hit the halfway point! The original run of Batman:  The Animated Series consists of 85 episodes and we are now halfway through that batch. I suppose our next milestone will be episode 52 since that will mark one year of posts on the subject, followed by episode 65 which marks the end(!) of the first season. For episode 43 we have a new villain and a returning one. I mentioned it in last week’s write-up, but coming up with an immediate 65 episode order is pretty challenging, and rather than come up with 65 unique, original, stories the staff on Batman sometimes turned to the comics for a story. This week’s episode is one such episode in which comic writer Len Wein was asked to adapt his story about a werewolf from Batman #255 for the show. It’s kind of a weird concept for Batman, but it’s in-line with the Man-Bat villain from episode one in terms of feasibility. It also feels like kind of anti-drug PSA. Government standards require a certain amount of educational content in children’s programming and I’m not sure if this one qualified for it, but we’ll get to that in the write-up. 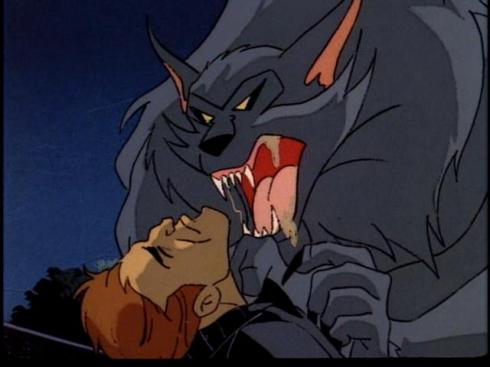 Not a good night to be walking your dog.

The episode opens on a gentleman (Peter Scolari) walking his dog on a typical Gotham evening. The dog becomes agitated at something offscreen, but it turns out to be just a jogger. Or was it? A massive werewolf (Frank Welker) soon emerges from the brush and attacks! The man is helpless against the beast, but fortunately for him Batman is in the area. He confronts the beast, but their fight is cut short when the gentleman is flung from the park bridge. Batman dives into the water to save him, and as he pulls him from the water the wolf-man flees.

The setting shifts to Gotham PD and Gordon is wrapping up some business for the night. Batman interrupts him to fill him in on what happened in the park. He wants to know if anything could be linked to the werewolf character, but the only thing Gordon can find is some timber wolves were stolen from the zoo recently. The victim of that night’s attack, John Hamner, is a security guard for the zoo and Batman thinks that’s not likely to be a coincidence. As he leaves Gordon’s office, he floats an interesting possibility:  what if that wolf creature wasn’t wearing a mask?

Of course it’s not a mask, Batman, because where would the fun be in that? The episode is not at all interested in even making that a question as we’re taken to a construction yard and an individual with an unmistakable bowl cut is re-introduced. Professor Milo (Treat Williams), the villain from “Cat Scratch Fever,” is seated at a desk when the werewolf barges in. He’s rather calm in the face of such a frightening creature, but that’s because he knows exactly when this transformation will wear off. The creature becomes a huddled mess on the floor as he turns into an adult male. We don’t know who he is, and he isn’t shown in full frame, but he tells Milo that Hamner got away as he was foiled by Batman. Milo resolves to take care of that nuisance once and for all. 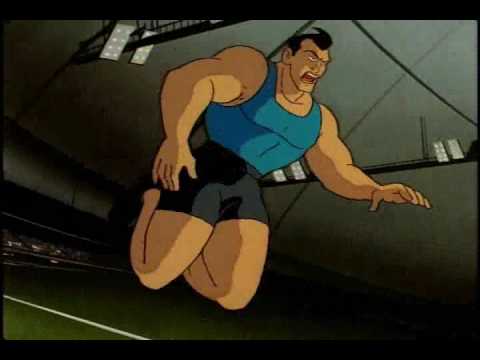 Tony Romulus is an expert long-jumper and track and field star.

Immediately, the show cuts to a skyline shot at day and a news broadcast can be heard. The broadcast refers to Anthony “Tony” Romulus (Harry Hamlin), a local Olympian about to make a large charitable donation. Geez, I wonder who the werewolf could be? Tony is training at a gym with Bruce Wayne, and his plan is discussed: he’ll make a 2 million dollar donation to charity, but only if Batman comes to his home and accepts the check. Wayne tries to figure out what his interest in Batman is, and Tony convincingly plays it off as wanting to meet the only man in Gotham who may be a superior athlete to him.

Anyone with a unibrow and scarf is a bad guy – come on, Batman!

Batman heads to the home of Romulus that night and finds the superstar athlete in his study. He’s dressed in an absurd leisure suit with a scarf, and welcomes Batman in. He offers him a drink, Batman declines, and gets to making out a check as an impatient Batman looks on. We see Romulus flip a switch underneath his desk, and soon Batman notices the room getting hotter. He realizes that he’s being gassed, but before he can retrieve his gas mask from his utility belt he collapses and Milo enters. Romulus removes Batman’s utility belt, while Milo acts threatening.

Milo and Romulus in a flashback when the lycanthropy first started to show.

Batman is then shown at the construction yard from earlier chained and unconscious in what looks to be an unfinished colosseum. Milo and Romulus are in the nearby shack and we get an in-depth look into their relationship. Milo is obviously responsible for Romulus’s condition, and he holds the cure to lycanthropy in a safe. He’s blackmailing Romulus, but don’t feel too bad for him. A flashback details how the two came to be involved. Romulus, seeking an edge, sought out Milo for steroids. Milo gave him a special, undetectable, steroid laced with wolf estrogen and Romulus greedily snatches it and drinks it down. The serum worked, and Romulus had a great fall games which enriched him exponentially. Romulus initially refused to pay Milo for his steroids, but soon the transformations began. They were only partial, and Milo was able to dupe Romulus into taking more of the formula to become a full-blown werewolf. His argument was the hybrid state he was in couldn’t be cured, but lycanthropy could be. We don’t know if he was lying, but it resulted in the Romulus we see now. Detective Bullock will soon confront Hamner at his security job at the zoo, and we’ll find out he’s the source of the timber wolf DNA as Milo paid him to unlock the cage, hence why the werewolf was sent to kill him at the start of the episode. 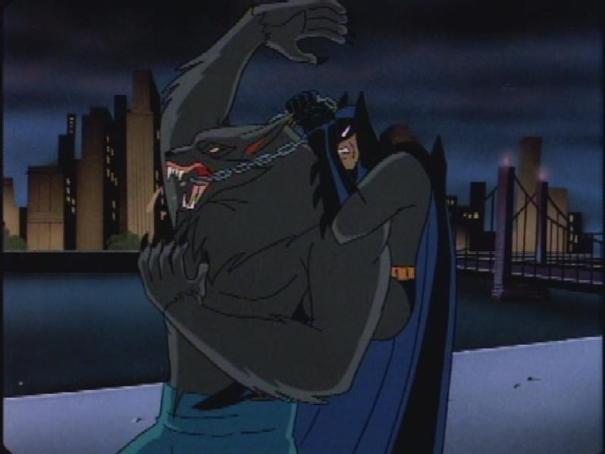 Romulus soon transforms, and Milo wants him to kill Batman. He attacks Milo first, and in the scuffle the antidote is dropped and broken (we don’t see why Milo removed it from the safe). He spares Milo, and targets Batman, who has regained consciousness. Finding a pin nearby, Batman picks the locks on his chains to free himself just in time to meet the werewolf. The two scuffle, and Batman quickly realizes he can’t just go toe-to-toe with Romulus. He heads for high ground as the Gotham PD arrive on the scene (some citizens out for a walk saw the commotion and called the police) and surround the place. Bullock lets Batman deal with Romulus, as the two battle on top of the colosseum. Romulus winds up swinging from a crane and gets struck by lightning causing him to fall into a nearby river, ending the confrontation. The police are able to apprehend Milo, who is in need of medical attention, and he taunts Gordon that they’ll never be able to make charges stick (this sounds like the writers setting up for a return of Milo, but this is his last appearance). The episode ends with a pair of individuals touring the home of Tony Romulus. It’s up for sale as Romulus never returned following the fight with Batman. The episode ends on a most predictable note, with the werewolf howling at the moon.

This is a mostly straight-forward episode, and really uneven. It takes a lot of shortcuts, most obviously in how the werewolf is dealt with. There’s no indication that lightning is in the air prior to Romulus being struck, so it feels rather cheap. Maybe they didn’t have the budget for a full-blown thunderstorm. Milo and Romulus are also apparently uninterested in Batman’s secret identity, since they have him at their mercy and they choose to leave his mask on. The episode as no interest in setting up a mystery, basically answering the questions as they come up. There’s a throw-away scene between Batman and Alfred in the Bat Cave where Batman bemoans his lack of progress in figuring out who the werewolf is (this is just before he goes to meet Romulus) that didn’t need to be there. We do get to see Alfred casually working on the Batmobile though which is kind of neat. If the steroid angle was supposed to be an anti-drug message, I’m not sure how effective it could be since most 8 year old boys watching the show probably thought being a werewolf was pretty cool.

The episode ends in perhaps the most predictable fashion possible.

This episode was animated by Akom, and if you recall from the write-up on “Joker’s Wild,” Akom was fired for how poorly that episode came out. Who knows where this episode was at the time of the firing, but it was probably close to completed. It’s better than that episode, but not by a whole lot. The backgrounds feel sparse and boring, at least the external ones, and there’s a weird disconnect between the background and the characters in the early scenes on the bridge. The guard, Hamner, looks almost exactly like the guard from “Tyger Tyger” though he’s voiced by a different actor here so I don’t know if he’s supposed to be the same person. There are a bunch of animation errors though, with Milo’s jacket changing color at times and Batman’s yellow symbol going from yellow to white. The biggest screw-up though is with Batman’s utility belt. It’s removed immediately after he’s drugged, but it’s mysteriously back on when we next see Batman chained up. Since he does not use it at all during his fight with the werewolf, I half to assume it wasn’t supposed to be there. It certainly wouldn’t have made any sense for Milo to return it to him, though it didn’t make sense for Milo to let the werewolf kill him when he could have done it effortlessly once Batman had passed out.

In Akom’s defense, the werewolf looks pretty cool. He’s fearsome looking with saliva dripping from his open mouth. He might be my favorite design of the creature enemies, being more interesting than Man-Bat or Tygrus. Akom doesn’t attempt anything too grand with him, but what he does is interesting enough. Unfortunately, he’s the only interesting part of the episode as the plot and fight sequences are rather droll. This is filler television, further demonstrated by the lack of a re-appearance from either Romulus or Milo in future episodes. I will say I like the music in this episode, the werewolf has a fun theme and I probably do not sing the praises of Shirley Walker enough, who’s work on this series is fantastic and I take it for granted. Akom still has one episode left in the tank, “What is Reality?” and I’m interested in seeing how that one looks in light of their firing, but it’ll be six weeks or so before we get to discuss that one.

This entry was posted on Friday, July 20th, 2018 at 12:00 am and tagged with akom productions, anthony romulus, batman, len wein, professor milo, shirley walker, the werewolf and posted in batman the animated series, Comics, Television. You can follow any responses to this entry through the RSS 2.0 feed.
« PhatMojo DuckTales – Scrooge McDuck and Donald Duck
Dragon Ball Z: Cooler’s Revenge »

One response to “Batman: The Animated Series – “Moon of the Wolf””