Batman: The Animated Series – “The Strange Secret of Bruce Wayne”

“The Strange Secret of Bruce Wayne” is another episode of Batman:  The Animated Series that can trace its roots back to a story from Detective Comics, in this case issues #471 and #472 “The Dead Yet Live” and “I Am the Batman!” by Steve Englehart. It introduces Hugo Strange to the Bat-verse, a scientist with a penchant for extortion. Strange uses a machine that can read the minds of individuals. Under the guise of therapy, Strange seduces wealthy individuals into agreeing to his services and when he unearths something nefarious from their subconscious he’s able to blackmail them in exchange for keeping their secrets. If that sounds familiar, then you’ve probably seen Batman Forever, where The Riddler used a similar scheme. We’re only 37 episodes deep, but we’ve already seen a few instances of where this animated series influenced a movie to come. Batman Forever borrowed some of the Two-Face bits from the episode of the same name, and Batman Begins basically adapted The Scarecrow’s scheme from “Dreams in Darkness.” It’s just another example of how far reaching this show was. This episode also marks the first time we’ll see a team-up of sorts out of Batman’s rogues gallery when Joker, The Penguin, and Two-Face show up in the episode’s second act.

Hugo Strange is today’s villain, and while there were tentative plans to bring him back, this ends up being his only appearance in the series.

The episode opens with a woman (who looks a lot like the woman being victimized by Poison Ivy in “Eternal Youth”) being approached on a bridge by some routine looking gangsters. The woman is revealed to be a judge in Gotham by the name of Maria Vargas (Carmen Zapata) and the gangsters want her to pay up in order to protect some information they have on her. Batman, apparently was tipped off or just happens to be in the right place at the right time, is watching from above as the judge hands over a briefcase full of money only to be told the price just went up. When she pleads with them that she can’t possibly pay more the crooks prepare to leave and Batman enters the fray. Vargas tries to take off and gets herself in some danger on the bridge, accidentally knocking herself out. Batman is forced to abandon his pursuit of the crooks in order to save her.

After the commotion is over and the police are on the scene, Commissioner Gordon explains he knows Vargas and can’t imagine her having a secret she doesn’t want out. He reveals he just dined with her recently and that she had just returned from vacation. He gets a call on his gigantic cell phone about the license plate on the limo the gangsters were driving and finds out it’s registered to the same resort Vargas just vacationed at. Batman then takes off via the Batwing, being piloted by Robin, and he playfully asks Robin if he seems stressed while remarking it may be time for a vacation. 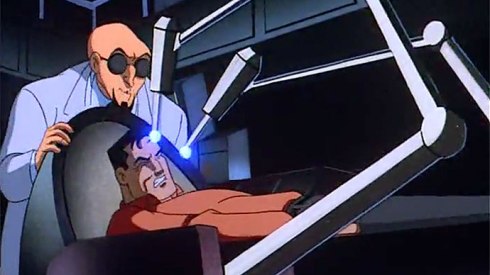 Strange’s memory extracting machine is a bad place for someone with an alter-ego to find themselves in.

Bruce Wayne and Alfred immediately depart for Yucca Springs, a resort that just so happens to be owned by Roland Dagget (a piece of info that’s never elaborated on) and is home to Dr. Hugo Strange (Ray Buktenica). Wayne signs up for a therapy session and finds himself in the doctor’s machine. He’s told the machine will help ease his stress by forcing him to confront his past. It seems a little risky for Bruce to enter such a device, but he goes along with it. Strange pries at Wayne to reveal information on his past, specifically the death of his parents. Bruce’s thoughts are transmitted to a screen for Strange to monitor, and when he pries further bats appear along with a gloved fist and an unmistakable logo. Bruce hops out of the machine and remarks it doesn’t seem to be an effective stress reliever for him. Strange tells him the first session is often hard, but they’ll do better tomorrow. As Bruce leaves he removes a tape from his machine and refers to him as Batman. Dun dun duuuuun!

Strange immediately starts calling around, and we’re treated to a pretty dark, but hilarious, answering machine greeting from The Joker. Strange is going to auction off his perhaps priceless information and in addition to Joker he also calls The Penguin and Two-Face. For Joker, this is the first time we’re seeing him since his apparent death in “The Laughing Fish” and no explanation for his survival is presented. It’s also a rare Joker appearance that occurs without Harley Quinn. For Two-Face, this is the first time we’ve seen him in anything more than a cameo since his debut. Apparently Arkham was unable to rehabilitate him. As for The Penguin, this is only his second appearance in the show after kind of a comedic debut in “I Have Batman in my Basement,” one of the more divisive episodes the show output.

Three fellas who would likely be interested in knowing who Batman is under the mask.

While Strange is busy peddling his tape, Wayne sneaks into his laboratory to get a closer look at the machine. He finds the tape on Judge Vargas (as well as many other, most of which are Easter Eggs) and sees what she’s been hiding in her past. When she was a little girl, she was playing with matches which lead to a fire at the Gotham Docks, apparently a pretty big story back in its day, as well as a destructive blaze. Bruce realizes his tape is missing and Alfred, sneaking around outside, radios him to let him know who Strange just welcomed to the resort. Bruce then begins erasing all of the tapes before finally destroying the machine. Strange and his muscle come in just as Bruce really gets going. He’s disappointed at the loss of his device, but he still has the tape of Bruce’s alter-ego so he’s in a pretty good mood. Bruce is tied up and tossed somewhere with Alfred. Alfred apologizes for failing him, but Bruce is taking things in stride claiming everything is going according to plan as he produces a lock pick and gets to work.

Making deals with the likes of Joker and Two-Face carries certain risks.

Meanwhile, Strange is presenting his finding to the villains. Surprisingly, they go along with the bidding and decide to pool their money together so they all can see what’s on the tape know it supposedly contains the true identity of Batman. I’m a bit puzzled why someone like The Joker wouldn’t just kill Strange and take the tape, but I’ll go along with it. Strange is very happy for his payment of approximately 50 million dollars, and gets ready to play the tape for them. Unknown to him, Batman is lurking in the rafters and he switches out the input on the projector to a different tape player. What plays is a video of Strange speaking with his cohorts about his plan to produce a phony tape about Batman in order to extort a bunch of villains out of their not so hard-earned money. This naturally enrages the attendants and Strange is forced to flee.

Joker, Two-Face, and Penguin eventually capture Strange and take him to the airport. Alfred, in their limo, picks up Batman and the two give chase while Alfred remarks he’s contacted Master Dick. The villains drag Strange onto an airplane and take to the sky. They plan to chuck him out and Strange starts begging for his life. He tells them Batman is Bruce Wayne, but no one believes him. Batman, able to stow-away on the plane, cuts the fuel line and the whole thing begins going down. It crashes, and somehow everyone on the plane is able to walk away fine just as the Gotham Police show up. As Strange is being lead away, he taunts Batman. He knows he used the machine to create a false tape of him to fool Joker, Penguin, and Two-Face. As he goes on and on, Bruce Wayne shows up, much to the shock of Strange. Batman says the two worked together to bring him down under the guise that Wayne and Judge Vargas are close friends and he wanted to get back at him. Once Gordon and Strange are out of earshot, Wayne is revealed to be Dick in disguise and everyone is ready to head home.

“The Strange Secret of Bruce Wayne” is a fun story – what would someone do with Batman’s secret identity? Strange’s actions are entirely logical for an extortionist, even if it’s a bit unrealistic to think he could get in touch with the likes of Joker and company so easily. The episode does jump through some hoops to preserve Batman’s secret in the end. I don’t like how the writers are afraid to show Batman as being fooled, and he instead needs to be one step ahead of Strange the whole time. The Bruce Wayne impersonation is also pretty unrealistic since Dick not only is able to look exactly like Wayne, but also sound like him as well. It’s the kind of thing a cartoon can get away with that live action would not. I guess they’re just taking advantage of the medium, but it does feel cheap. A lot happens in this episode so it moves really fast, which is fine. I suppose you could argue that the plot could have been dragged out across two episodes, but I’m fine with it as is. I did find it odd that Two-Face’s coin never came into play, he was ready to toss Strange out of the airplane, but I do like how he mentions that he knows Bruce Wayne and it’s why he can’t possibly believe that he would be Batman. Still, it’s kind of surprising that it was never revisited in a later episode with one of the three villains at least entertaining the notion. I feel like the plot of this episode is memorable, making this one of the most popular episodes of the show. I don’t know if it’s a top 10 episode, but it’s probably at least in the top 25. Just a good, some-what flawed, but entertaining episode.

This entry was posted on Friday, June 8th, 2018 at 12:00 am and tagged with batman, detective comics, harvey dent, hugo strange, mark hamill, robin, the joker, the penguin, two-face and posted in batman the animated series, Comics, Television. You can follow any responses to this entry through the RSS 2.0 feed.
« Getting Creative With Lego Creator – 31052
The Chronological Donald – Volume 2 »

One response to “Batman: The Animated Series – “The Strange Secret of Bruce Wayne””