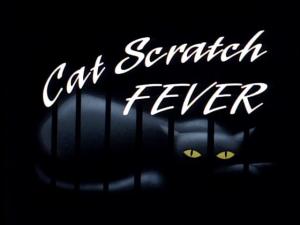 After watching so many episodes of Batman:  The Animated Series some patterns start to become obvious. A typical episode is split into two main parts: the discovery phase and the climactic confrontation between Batman and the villain of the day. Sometimes the episodes are uneven with one end of the episode not able to hold its own weight. Most of the time they’re both perfectly fine, but sometimes you get an episode where neither half really works, which brings me to “Cat Scratch Fever.” Aside from the fact that the title invokes unpleasant thoughts of Ted Nugent, in a Batman context it certainly brings to mind a certain woman, a cat woman, if you will. After a pretty lengthy layoff, we’re finally going to check-in with Selina Kyle (Adrienne Barbeau) and see what she’s up to while also getting a look at Roland Dagget’s latest scheme. This is also a noteworthy episode because it’s the final one animated by Akom. Akom was a frequent player in television animation. Based out of Korea, they would get a contract for work and often outsource it to other studios of varying quality (they famously did some rather shoddy work on X-Men’s pilot) and as a result they’ve produced some great episodes of animated television and some not so great, this episode being of the not so great variety which lead to their dismissal from the series.

The episode opens with Ms. Kyle at a hearing concerning the events of “The Cat and the Claw.” If you need a refresher, Catwoman and Batman foiled the plans of Red Claw who could have unleashed devastation on Gotham City if not for their intervention. Her heroic deeds did not score her many points with Batman however, as following the defeat of Red Claw Batman still placed her in handcuffs for petty burglary. This was a case of the show trying to have Batman be stoic in his attitude towards the law – it’s not for him to decide if Catwoman should be punished, but the court. It’s hypocritical considering Batman breaks the law all of the time with forced entry and witness intimidation. It’s why he’s a vigilante after all, so he can operate above the law. Thankfully our unnamed judge here (played by Virginia Capers) sees things my way as she gives Selina probation on the condition that she never dawn her Catwoman costume to commit crimes (so I guess she’s free to break the law out of costume?).

A friend to cats everywhere.

An elated Selina returns home to her penthouse apartment and her assistant Maven is still there. We don’t know how much time has passed between appearances, but it seems like this is the first time Selina is home even though I would think she would have been able to post bail. Anyway, Maven informs her that her precious kitty Isis is missing and she supposes the cat went out looking for Selina, so Selina goes out looking for Isis. Deciding against dressing as Catwoman, she’s just plain old Selina. While looking for Isis, she stumbles upon a couple of hoodlums out collecting strays. They’re not with the pound, and Selina suspects the worst of them. Jessy (Denny Dillon) and Paunch (who isn’t voiced) are the two goons and they put up a fight. When things look like they’re going bad for Selina, guess who shows up. With Batman’s help, the two are put away effortlessly (the animation is careful to make sure Batman doesn’t strike the female thug, Jessy), but before Selina can thank him properly, Batman runs off as the police arrive. Finding a recently released individual like Selina Kyle in such a situation naturally prompts the arriving officers to bring her to the precinct, but Selina’s other knight in shining armor is there to bail her out.

Bruce and Alfred pick up Selina, who politely declines the advances of Bruce. She mentions the two thugs were quickly bailed out by Roland Dagget, which is a pretty good lead not just for Batman, but Catwoman as well. She somehow figures out that whatever is going on with the stray cat population is coming from a specific Dagget owned laboratory on the outskirts of Gotham. Inside, we get a peek at Dagget (Ed Asner) himself discussing some plans with a Professor Milo (Treat Williams, who I would have bet money on was Rob Paulsen) who has devised a rather nasty toxin. The toxin is placed into an animal which seems to cause the animal to react as if it’s rabid (he demonstrates on a dog). Their plan is to infect the stray animal population, which will in turn cause the disease to spread to humans, and then Dagget can sell the only cure for a rather tidy profit. We also see Isis is among the captured animals, and she’s Milo’s next specimen.

When Catwoman enters the lab she finds it’s dark and quiet. She quickly locates her beloved cat and frees her from her cage. Isis at first seems docile, but she quickly turns on Catwoman and bites her, then flees out an open window. The thugs, Jessy and Paunch return along with Milo and Catwoman is forced to flee. Milo takes note of the bite wound she received and lets his cohorts know they don’t need to pursue aggressively as the toxin will do the work for them. And sure enough, Catwoman is rather woozy and off-balance almost right away. She discards her mask and collapses in the snow as Isis runs off.

Elsewhere, Bruce Wayne has done some sleuthing on his own to figure out what the Dagget connection could be. Lucius Fox (Brock Peters) is able to provide some important info about a new drug Dagget is believed to be developing and no one knows what it’s for (the dialogue in this scene is very similar to another Dagget episode “Appointment in Crime Alley,” so much so that it had to be intentional though it could have also just been lazy writing). Batman heads out to investigate, which is a good thing since he finds Selina collapsed in the snow. He takes her to a nearby shack, of sorts, where she gets him up to speed on what happened before taking a little rest.

While Batman is busy tending to Selina, Dagget is getting impatient with the progress being made. He orders Milo to commence with the operation, while he explains he’s just waiting on Paunch to fetch some of the anti-toxin from another lab in case anything goes wrong. Unfortunately for Paunch, he’s going to run into Batman while he’s out doing Milo’s bidding. Batman was hoping to get some info out of Paunch, but he picked the wrong guy considering he’s mute and all. Still, Selina shared enough information with him to figure out Dagget’s scheme, but just in case he didn’t, Dagget and Jessy show up to confirm his suspicions (Dagget, like many villains, just can’t help himself).

Not the most fearsome trio, but left to right is Milo, Jessy, and Paunch.

Batman is going to be forced to deal with the likes of Paunch and Jessy, who are now armed with machine-guns, as well as the infected dog from earlier. The show is careful to not show Batman being too mean to the dog, he’ll use his cape and wits to subdue him before embarking on a “super fun happy slide” of his own through the snow. Paunch and Jessy confront him on a frozen lake, and their guns are able to cause a huge mess of things. Batman goes through the ice, but of course he isn’t down for good and ends up subduing the brutes. He’s able to utilize the anti-toxin on Selina, as well as our poor canine friend.

The episode ends with Selina back at home. Maven informs her that she’s being hailed a hero once again for her part in stopping Dagget’s plot, and this time it sounds like Dagget won’t escape justice as he’s under investigation for his role in the whole thing. Selina should be happy, but she never found Isis and she’s despondent over her still missing cat. As she sees Maven out, a basket is lowered in the background from the roof of her building containing her precious kitty. It would seem Batman knows how to make a romantic gesture, and best of all, Isis has been cured of the toxin. The episode ends with Selina lovingly hugging the cute little cat.

The episode mostly looks rather subpar, but it has its moments.

Your enjoyment of this episode likely hinges on how big an animal lover you are. I like them as much as most people, I suppose. I’ve had a cat all my life and when this episode aired I even had a little black cat like Isis myself. Even so, the whole poisoning of animals does little for me, and Professor Milo seems kind of cartoonishly evil. Jessy is especially annoying, but I suppose that’s by design. The whole scheme seems small and kind of odd, but I suppose it’s unique. The episode also re-establishes that Selina has a thing for Batman and only Batman, while Bruce lusts after her. By the conclusion, she’s also pushed to the sideline with an uncertain role going forward. She’s not really a villain, but does she have it in her to be some sort of vigilante on equal footing with Batman? The show will do a rather poor job with her from here on out, even the show runners have agreed as much.

What really can’t be denied is how crummy this episode looks. Character models are inconsistent and the facial details, in particular with Selina, look off-model at times. The effects on the infected dog are poor as well, with the foam/drool basically being the same color as the dog’s fur. I do appreciate the sort of rugged appearance of Jessy, though Paunch is so cartoonish he almost looks like he’s not from this series. He kind of reminds me of a Popeye character, or something. If I can give the visuals one compliment, it’s the the snowy scenery looks pretty good and it’s a nice change of pace from the usual visuals.

The only real noteworthy aspect of this episode is it reintroduces Catwoman, and also introduces a villain who will at least make a future appearance in Professor Milo. Milo isn’t exactly an A-list villain, but at least the episode does directly deal with the fall-out of a previous episode where Catwoman is concerned. It’s not one I was particularly excited to revisit, and one I won’t likely watch again anytime soon.

This entry was posted on Friday, June 1st, 2018 at 12:00 am and tagged with adrienne barbeau, akom, batman, catwoman, ed asner, professor milo, roland dagget, Selina Kyle, treat williams and posted in batman the animated series, Comics, Television. You can follow any responses to this entry through the RSS 2.0 feed.
« Batman: The Animated Series – “Night of the Ninja”
Getting Creative With Lego Creator – 31052 »

One response to “Batman: The Animated Series – “Cat Scratch Fever””