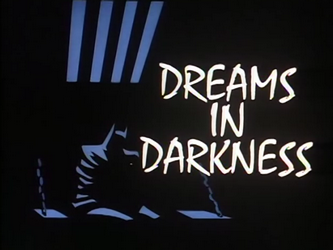 Episode 28 of Batman:  The Animated Series is one noteworthy and packed episode. This episode is both based on a story from the comics and also the inspiration for an even bigger story. It features, once again, The Scarecrow who is making his third appearance in this cartoon as a featured villain. This is pretty remarkable as prior to this series The Scarecrow wasn’t exactly a household name. He had appeared in some versions of The Super Friends television shows, but he was hardly popular. More prominent villains like Catwoman and The Penguin, fresh off starring in Batman Returns, have only been featured in 3 episodes total, and one was a two-parter. In the case of The Penguin, he was featured in the sort of throw-away goofy “I’ve Got Batman in my Basement” episode which is not exactly a prominent spot considering he’s foiled by kids for most of that one. Another classic and fan-favorite villain The Riddler hasn’t even been featured in one yet! It’s pretty cool that the show is able to elevate a villain like The Scarecrow, as his episodes have generally been pretty solid and this one is no different. This episode will go on to inspire much of Batman Begins as both feature The Scarecrow trying to poison Gotham’s water supply via Arkham Asylum’s basement. Presumably, Scarecrow was included in that film because he hadn’t been used in prior feature films starring Batman and if you’re going to look for Scarecrow stories you could do worse than looking at Batman:  The Animated Series. The main notable difference between the two is the inclusion of Ra’s Al Ghul in the film’s version of the plot as the mastermind behind everything. 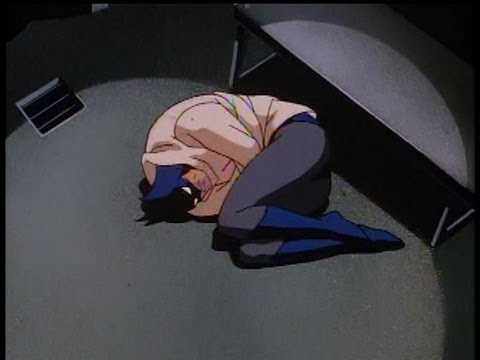 Not the way we’re used to seeing our hero.

“Dreams in Darkness,” not to be confused with the upcoming “Perchance to Dream,” also draws inspiration from the tale “Batman:  The Last Arkham” as both feature Batman as an inmate in Arkham Asylum. It’s also been a part of Batman’s character that some citizens of Gotham view him similarly to the weird, costumed villains he fights against. Batman walks a fine line between righteousness and obsession, which can teeter on the edge of sanity. This show won’t dive too deep into those themes, but it is a part of his character that I do find interesting. For this episode, he becomes an inmate of Arkham by being exposed to Scarecrow’s fear toxin. It makes him hallucinate and act a bit crazy. He has an antidote this time, but a doctor tells him he’ll need to rest a couple of days after taking it and he just doesn’t have that kind of time. All of Gotham is in danger, and Batman needs to convince the doctors at Arkham that he needs to be set free so he can stop The Scarecrow from infecting all of Gotham with his hallucinogenic drug.

What adds a nice twist to the episode is it’s largely a flashback. The episode opens from the perspective of a doctor and some orderlies at Arkham discussing their latest inmate, which is revealed to be Batman. Batman then narrates us on how he ended up in this state, before the story catches up to the present and Batman is forced to get creative to free himself. In some ways, the real antagonist of the episode is Dr. Batholomew (Richard Dysart) who doesn’t believe Batman’s tale of imminent danger, or that The Scarecrow could be behind it because he’s safely imprisoned at Arkham. The Scarecrow himself appears only really for the climax of the episode. 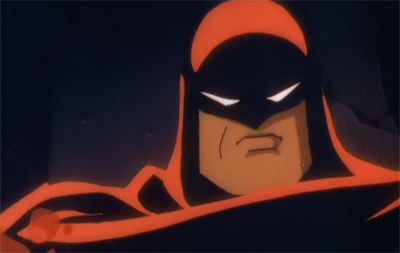 Despite spending a good portion of the episode cowering in fear, Batman still finds time to look like a bad ass.

Most of the episode is devoted to Batman’s narrated flashback. He gets poisoned when stopping an attempt by one of Scarecrow’s goons to poison the water supply at a spa. The goon in this case has a missing right hand and in its place is an attachment that features a welding torch and a drill, the latter of which is used to create a tense little moment where it looks like Batman is going to have his heart exhumed. Batman stops him, but during the confrontation the crook accidentally smashes his machinery causing a red gas to seep out. At the time, Batman is unaware it has anything to do with The Scarecrow which is why he seeks medical advice after experiencing hallucinations such as seeing The Joker in the Batcave or nearly running over an illusion of Robin with the Batmobile. It’s when he visits the crook he took out at the hospital that he learns he’s been diagnosed with fear hallucinations, which is all Batman really needs to hear to know The Scarecrow is behind it.

Batman is able to put two and two together; the crook he stopped was trying to poison a water a supply for a spa and Scarecrow is not likely to stop there. He’s just now in Arkham and needs to get out. Dr. Bartholomew won’t even entertain Batman’s story, until someone finally bothers to check on Dr. Crane and finds out that he has, once again, escaped. Batman will soon do the same, and he’s able to extricate himself by taking an axe which was mounted on a hallway wall beneath a fire extinguisher. I’m no doctor, but having an axe in an easily accessible area of a mental hospital seems like a bad idea. 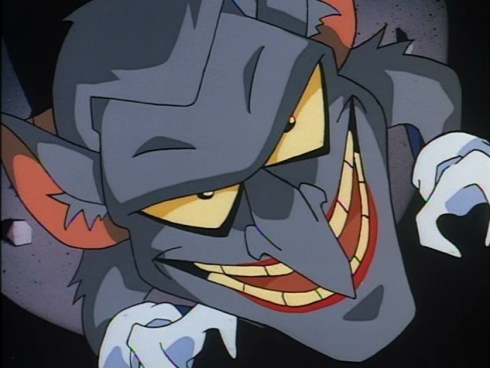 Since Batman is rigged up in a strait jacket for most of the episode, the writers have to find a way to explain why no one takes Batman’s mask off. Dr. Bartholomew offers some goofy medical reason why they should not, which I suppose is good enough. Of interest though, is when Dr. Bartholomew starts name-dropping other inmates of Arkham he uses their real names, including Jack Napier who is canonically established as Joker in this series. I suppose that makes sense given how heavily inspired it is by the Burton films. There’s also a really interesting dream sequence for Batman where he’s in a mostly red environment trying to chase after his parents. They disappear into a tunnel which morphs into the barrel of a gun dripping blood that blows Batman away. It’s pretty chilling and a good example of how hard it would be for Batman to simply push aside the hallucinations brought on by the drug. 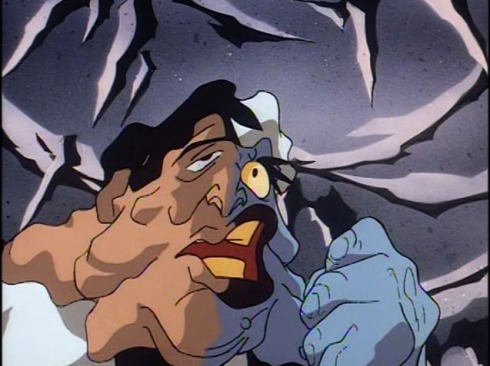 Things get pretty weird underneath Arkham.

Eventually, Batman will reach the bowels of Arkham Asylum and find The Scarecrow trying to infect the river that runs underneath Arkham. Like the other Scarecrow episodes, Batman is forced to battle his own hallucinations more so than The Scarecrow. A series of timers rigged to Scarecrow’s gas is the source of the tension, but it just makes me wonder why Scarecrow doesn’t just eliminate the timer and shoot the stuff off. Batman’s hallucinations allow the artists to bring in other villains when a rat morphs into The Joker, Penguin rises from the ground, Two-Face emerges from Penguin and then melts into Poison Ivy. Robin and Alfred pop in to admonish Bruce for living in the darkness too long which is basically the only time the episode really dips its toe into the waters of “Bruce really belongs in Arkham” plot point. It’s some great animation, maybe not as great as the Clayface stuff but a similar effect is in play here. The only drawback is Batman uttering a hack kind of line, “No! You’re not real!” More embarrassing, is when Batman is being confronted by some of Scarecrow’s henchman he’s paralyzed with fear and resorts to whistling into a microphone which in turn paralyzes the henchmen. This is, by far, the dumbest thing we’ve seen Batman do in this cartoon thus far.

Batman does indeed stop The Scarecrow’s scheme, with only one second to spare. Scarecrow will have the ignominy of being exposed to his own gas and reduced to a raving lunatic at the episode’s end, at which point Dr. Bartholomew laughably suggests the orderlies keep him locked up this time. The guy has escaped twice in the past five episodes, so I’m not betting on Arkham this time. With Scarecrow taken care of, Batman is able to rest in the Batcave and have Alfred administer the antidote which will take him out of action for two days so hopefully the criminals of Gotham behave. It’s sort of sweet that Bruce chooses to rest up in the Batcave as opposed to Wayne Manor, likely feeling more at home there and more secure. 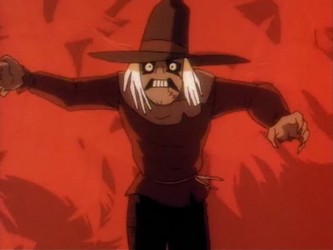 So long, Scarecrow, we’re going to miss you.

With this being episode 28 this also marks the final episode of the Batman:  The Animated Series Volume One DVD release. Amazon refers to it as season one, which is a bit of a lie as we’re actually not even halfway through season one yet, but it does feel like the first milestone for this little project. “Dreams in Darkness” is a great concept for an episode that I don’t think is fully realized here. It’s still a perfectly fine episode for the show with some great animation and a few trippy moments as well. It’s not my favorite of The Scarecrow episodes, that distinction still belongs to “Nothing to Fear,” but it maintains his consistently solid track record thus far. This is actually Scarecrow’s final turn as a featured villain in the show, which seems weird after seeing him so much over the course of the first 28 episodes. He’ll pop up in a lesser role though down the line before getting a redesign in The New Batman Adventures that many folks prefer to this one. He can be proud of the mark he made on this series though, which is more than some other villains can say.

This entry was posted on Friday, April 6th, 2018 at 12:00 am and tagged with batman, batman begins, joker, super hero cartoons, the last arkham, the scarecrow and posted in batman the animated series, Comics, Television. You can follow any responses to this entry through the RSS 2.0 feed.
« A Bloated Preview of WrestleMania 34
Boss Fight Studio Dead-Eye Duck and Holiday Bucky »

One response to “Batman: The Animated Series – “Dreams in Darkness””