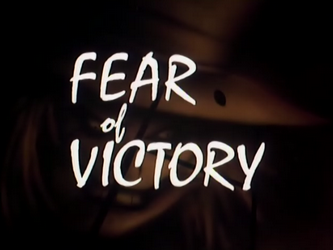 It’s been awhile, but making just his second appearance of the series (and first since episode two) is Robin, coming back to play a fairly large role in this week’s episode “Fear of Victory.” This episode was actually the television debut of Robin, since his first appearance came in the Christmas episode which was held back to air closer to the holiday. As a kid, I remember seeing the preview for this episode which featured Robin and getting all excited about it. I really don’t know why since I’ve always much preferred Batman to Robin, maybe it was just because it was something different? Plus, Robin had yet to appear in anything Batman related in quite some time, outside of the comics, so it had been a long while since I had interacted with The Boy Wonder.

As you can probably guess from the title, our villain for this episode is The Scarecrow. Making also his second appearance, Scarecrow has a re-design that makes him look far more fearsome than how he did in “Nothing to Fear.” His face is more interesting to behold and features a crooked mouth full of oddly shaped teeth. In some respects he reminds me of Clayface, and the animators take some liberties with his mask to make him look more fearsome when they want to. He also now has a mass of straw hair under his hat, further adding to the whole scarecrow thing he has going on. Over all, definitely an improvement over that eggplant shaped head he had going on previously. This episode is also noteworthy since it tries to show us how Batman’s enemies might go about getting money for their nefarious schemes. Scarecrow isn’t trying to exact revenge or take over Gotham or anything crazy, he’s just trying to scam bookies by rigging sporting events using his fear toxin. Since he was fired from his university post, he likely needs some funds to get a good lab up and running to further his experiments, though the lack of which apparently didn’t prevent him from creating what he needed for this episode.

The episode opens on a sports highlight package that displays various performers collapsing in fear during their respective games. Dick Grayson is watching the program from his dorm when his roommate receives a telegram from a skinny, red-headed courier. I’ve got a pretty good memory, so I know who that guy is immediately (and the title card is a total give-away anyways). The telegram is from “a fan” and cautions Brian, Dick’s roommate and quarterback for the school’s football team, not to take fear lightly. When Robin is out on patrol with Batman he fills him in on the odd telegram, and they wonder if it has any connection to the odd things they’ve been seeing in the sports world, including his own roommate getting freaked out on the field. They fire off the first appearance of the crappy version of the grapple guns, the ones that just end in metal Batman logos and stab into the ledges. When Robin has a panic attack while confronting some goons, it tips off Batman that someone is poisoning the athletes and causing them to experience fear.

Some testing back at the lab confirms Batman’s hypothesis and naturally leads him to suspect The Scarecrow. They pay Arkham Asylum a visit where we get some cameos from the likes of Joker and Poison Ivy. Oddly enough, they’re all depicted in their regular villain attire instead of inmate jumpsuits. Batman arrives just as Dr. Crane’s food is being served and he witnesses an orderly tossing it in the garbage rather than delivering it to the appropriate inmate. Batman decides to check out Scarecrow’s cell, which the orderly really doesn’t want him to do, and he finds there’s a scarecrow there in his place. My guess is the writers/story boarders came up with this first and thus were pigeon-holed into putting the other villains in their regular attire as a result. All so they could have a scarecrow in place of The Scarecrow.

When Brian hallucinates the animators get to have fun with some face-morphing animation to depict his fear.

Figuring out who is behind everything is obviously elementary. Dr. Crane is shown throughout the episode delivering the telegram and also collecting his winnings and each time he’s in disguise. This isn’t to hide the fact that it’s The Scarecrow from the viewer, but to seemingly hide his redesign which pays off when he scares his bookie’s hired muscle. We get an extreme closeup of his face where liberties are taken to add sharp, piranha like teeth to his mask and really make him look kind of freaky, at least I remember it being that way to me as a kid. And the guy he is scaring in that scene is voiced by Tim Curry, who was supposed to be The Joker before it was decided to go with Mark Hamill. They must have had him record some ancillary characters (Hamill voices the orderly in this episode) that they elected to keep. The real tension, I suppose, of the episode is Robin trying to overcome the fear toxin he was exposed to via his roommate’s telegram. He has a panic attack early that almost costs Batman dearly, and Batman has to kind of keep him at arm’s length for the confrontation with Scarecrow. Batman basically gives him tough love as there’s no cure for the toxin, you just need to power through until its effects ware off.

The Dynamic Duo figures out that Scarecrow is targeting the big Gotham Knights game. In a bit of hack story-telling, Batman and Robin’s “fight” with The Scarecrow is cut in sync with the actions of the football game, including Scarecrow’s vial being dropped cut with a fumble in the game. It’s stupid and the type of thing director’s can’t seem to resist when football pops into an action series (I remember contemporary series Rugrats doing something similar). There’s also a really long pass at one point in the game that’s animated to look more like a punt, making me wonder if the animators had ever seen American football (probably not). Since Scarecrow isn’t much of a physical threat, he’s caught rather easily once his threat to poison the entire arena is rendered toothless by Robin overcoming his fear and collecting the vial. Scarecrow suggests his one vial could have infected the whole stadium, which seems ludicrous. I guess since he was cornered in some scaffolding with no way out he could have just been lying in a desperate bid to escape, Batman seems to buy it though.

“Fear of Victory” is an okay episode of Batman: The Animated Series. I like The Scarecrow and I like his new look, which he’ll hang onto until The New Batman Adventures. The little side story with Robin is fine and it makes sense since we’ve already seen Batman have to deal with the toxin, so why not Robin? It gives him some credibility since he does overcome it in the end, and since Batman doesn’t just tell him to stay home, it does tell us that Batman must value him as a sidekick. What is never really explained is just what drives Robin to actually accompany Batman on his various outings. Because his roommate got scared playing football? Okay. He’ll just kind of show up for no reason from time to time until season two. I prefer Batman as a solo act, so I’m fine with this arrangement and I’m fine with this episode.

One response to “Batman: The Animated Series – “Fear of Victory””