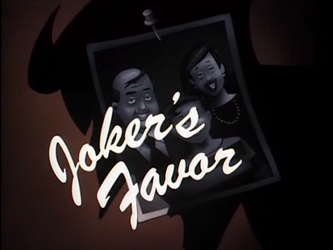 At last, we’ve come to the television debut of The Joker. Despite already appearing in several episodes, it was production episode number 22 that ended up being the first Joker episode to air on television, and as a debut episode, it’s both odd and strangely appropriate. The episode, seemingly more so than the other Joker episodes, requires having knowledge of who The Joker is going into it. As has been established with a few villains, The Joker existed before the events of the show and he’s so well known that even the citizens of Gotham know who he is, as we shall see with poor Charlie Collins. This episode is also the first Joker episode where Paul Dini is credited as having written, though as a creator on the show it stands to reason he had input on most of the episodes. And of course, this episode is most notable for being the debut of Harley Quinn in any medium. She would arguably end up being the biggest break-out star on the show. Interestingly, if you have the DVD release for this first volume of episodes the episode is titled “The Joker’s Favor,” though everywhere I’ve seen it listed it’s just referred to as “Joker’s Favor.” 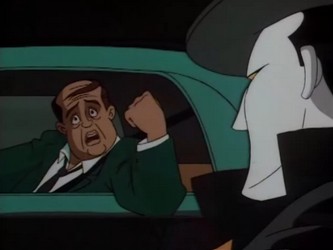 The episode opens with its protagonist. No, it isn’t Batman or even Joker, but an ordinary chum by the name of Charlie Collins (Ed Begley Jr.). Charlie is just an average guy having a bad day. Not much has gone right and his wife is making meatloaf for dinner – he hates meatloaf. He’s driving home from work when we meet him, and he’s soon cut-off by another motorist. This is enough to push Charlie over the edge and he starts laying on his horn and scolding the individual who wronged him on the road. Much to Charlie’s horror, the other motorist he just sassed turns out to be none other than The Joker. One turn of the head and a hideous grin is enough to scare the Hell out of Charlie. He knows who he just yelled at and immediately shrinks like a frightened turtle. Unfortunately, The Joker slides in right behind him and begins to follow him. Charlie tries to lose him and hastily exits the freeway. He pulls off the road and takes to his feet running through the nearby woods as fast as his short legs will carry him.

This is not a situation you want to find yourself in.

Charlie collapses, exhausted, at the base of a tree, but he looks up only to find himself gazing up at The Joker. Joker, decked out in his gray hat and trench coat that he’ll sport in Mask of the Phantasm, isn’t too happy with old Chuck. He gives Charlie a chance to resume his tough guy talk, and as expected, Charlie is too frightened to do much but offer an apology. Joker, being the caring type, decides he’s not going to kill Charlie and instead tells him he expects a favor in return, some day. Charlie is frightened out of his mind, but all in all pretty relieved to not be dead as The Joker departs.

There she is, that character we all love.

Two years later, the Gotham P.D. is getting ready to celebrate Commissioner Gordon with a special dinner and Joker wants sees it as a perfect opportunity for mischief. He decides now, along with his henchman Harley (Arleen Sorkin) seated beside him, to look up Charlie and call-in his favor. Turns out, Charlie did the wise thing and entered into a witness relocation program following his brush with The Joker. He’s now Don Wallace and lives in Ohio, but apparently Joker has been keeping a close eye on him because he’s able to call him up. Charlie tries to tell him he has the wrong number, but he soon realizes who is on the other end. Joker orders him to the airport to hop on the next flight to Gotham where Harley will pick him up from the airport. 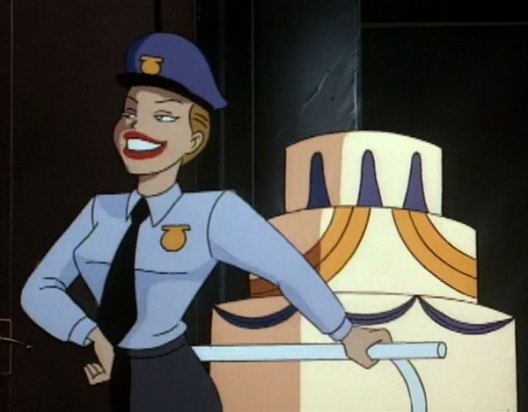 I have to admit, that cop outfit really works for her.

In Gotham, Charlie is forced to confront the Joker once more, and much to his surprise, he’s only asked to open a door. Feeling he’s capable of doing that, he goes along with the plan. Realizing something is up though, he leaves a bat-signal like calling card for Batman as he’s put into position inside the banquet for Gordon. He does as he’s told, opening the door when instructed and in strolls Harley dressed as a cop with an over-sized cake in tow. The men in the room think something sexy is bound to happen, but instead they’re all hit with some nerve gas that renders them all unable to move, frozen in place like statues. Harley, of course, wears a mask to prevent the gas from affecting her and she affixes one to Charlie as well. Joker rises from the cake to taunt the police as Harley attaches a bomb to Gordon, his plan almost complete. 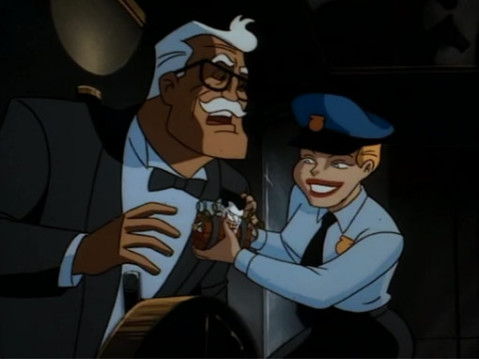 That could be a gag bomb, but I wouldn’t want to wait around to find out.

Charlie, realizing he can’t be an accessory to this, tries to do something about it but finds his hand has been glued to the door handle. Joker informs him he’s done with him and leaves him to die with the others. Good thing he left that little signal for Batman, because the caped crusader soon arrives on the scene. Charlie tells him what’s going on, and Batman is able to remove the bomb just in time with the added benefit that it landed on Joker’s escape van when he tossed it out the window.

Got to hand it to him, Joker really takes it well when things don’t go according to plan.

A fight ensues between Batman and Joker’s goons. Joker is able to use yet another bomb to distract Batman and slips into an alley only to find Charlie waiting for him. He tries to brush past Charlie, but all of a sudden he finds the portly fellow full of courage. Charlie slugs Joker in the stomach and knocks him into some trash cans. He then produces another Joker bomb, only he seems intent on blowing them all up. Batman arrives and tries to talk Charlie out of it, but Charlie makes the correct observation in noting it’s pointless because The Joker will just escape from wherever he’s locked-up to torment him again. Joker, now no longer having any fun, tosses all of the information he has on Charlie at his feet, but Charlie refuses to abandon this course of action. Joker tries to hide behind Batman, but Charlie tosses him the bomb only for it to detonate and reveal itself to be a gag bomb. Charlie has a good laugh, and Batman even joins in, at Joker’s expense. Batman basically tells Charlie to get out of here, and he’s happy to do so. As we wanders away, he even mentions he hopes his wife is making meatloaf for dinner.

In the end, Charlie gets the last laugh.

“Joker’s Favor” succeeded as a Joker episode for two very important reasons. One, it establishes The Joker as being a villain to fear. It’s easy to lose sight of that on a kid’s show given all of the silly Joker stuff that exists in most of the episodes featuring him, but he is a murderer and someone to be feared. His stalking of Charlie is creepy and Charlie’s fear is easy to understand. And then second, it also showcases Joker’s silly side, the side of him that basically always gets in the way and prevents him for doing real lasting damage on the show. He carries gag bombs, rarely takes Batman seriously, and even dismisses Charlie. He also only uses Charlie in his scheme because he just wants to terrify the guy. He probably could have utilized someone else for his plant at the banquet, someone who wouldn’t have betrayed him and called Batman, but as we’ll see time and time again The Joker just can’t get out of his own way. It often seems like he prefers it that way.

Harley Quinn makes a nice debut for herself, though it’s also not indicative of the character she’ll become. Her harlequin inspired attire and attitude is fetching (much of that can be credited to Arleen Sorkin who really brings life and charm to the character through her performance) and she makes an instant impact since so often the henchman in the show are lacking a personality. Still, I’m not sure if people expected to see more of her or if they thought she would just be a one and done sort of character. Of course, she wasn’t, but considering a series of Joker episodes followed this one without Harley it seemed to suggest she wouldn’t play a large role going forward. Thankfully, that wasn’t the case, and Harley ended up being one of the few villains who often has another layer revealed about her in each subsequent episode she appears in, rather than just being an unchanging villain of the week.

If you liked Harley in this episode, then I have some good news for you because we’ll be seeing a lot more of her.

As for Charlie, he was one and done and that’s the way it should have been. Joker probably should have sought revenge, and if you’re the dark type maybe you just assume Joker did end up killing him and we never found out. If Joker could find him once even with a name change and move out of town then he could probably do it again. This episode also doesn’t feature much Batman, but at this stage that’s fine as we’re pretty comfortable with Batman at this point. He can sort of come and go as he pleases, as long as what’s in his place is worthwhile and here it certainly is. This may be my favorite Joker episode, though more good ones are to come.

This entry was posted on Friday, February 23rd, 2018 at 12:00 am and tagged with arleen sorkin, batman, charlie collins, harley quinn, joker, mark hamill and posted in batman the animated series, Comics, Television. You can follow any responses to this entry through the RSS 2.0 feed.
« Mega Man X
Batman: The Animated Series – “Vendetta” »

One response to “Batman: The Animated Series – “Joker’s Favor””