Batman: The Animated Series – “Feat of Clay – Part I”

I don’t know what happened that caused me to miss the first few broadcast episodes of Batman: The Animated Series, but “Feat of Clay” was the first episode I ever saw. It’s possible that my memory is just fuzzy and I did see the few episodes that aired before it, but my family had also just moved from New Hampshire to Virginia so it was a pretty hectic period for us. Regardless, assuming it was my introduction to the show it’s a pretty great way to have the ice broken. Though “Feat of Clay” is a bit more procedural an episode as opposed to action packed, it’s a well constructed and satisfying viewing experience and I remember being captivated by the show’s tone which just felt so much more “adult” than what I was used to. 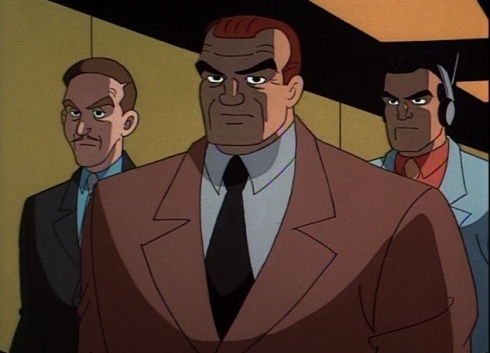 Roland Daggett is a made for TV villain that proves to be a worthy addition to Batman canon.

“Feat of Clay” marks the debut of two characters we’ll see more than once over the course of the series. The first is crooked businessman Roland Daggett (Ed Asner). Rumor has it he was supposed to be Max Shreck from Batman Returns but supposedly Tim Burton wasn’t on board with that for some reason, so Daggett was created instead. He’s a businessman and slumlord who prioritizes money above human life. In this episode, he’s concerned with his chemical plant, Daggett Industries, and a certain client. Matt Hagen (Ron Perlman) is that client, a down on his luck actor once renowned for his ability to alter his appearance and mold himself for any role. Ever since an accident left his face horribly disfigured, he’s found it pretty hard to find work. 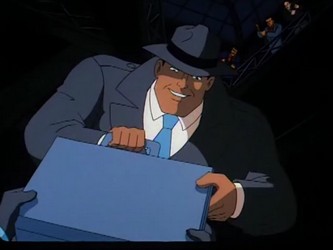 The episode opens in confusing fashion (for an eight year old) with Bruce Wayne meeting Wayne Enterprises CEO Lucius Fox in the middle of the night at an old warehouse (Gotham is just full of these). Fox is confused, but he brought what Wayne was seeking – a briefcase containing documents which incriminate Daggett in an illegal attempt at taking over Wayne Enterprises. Wayne quickly double-crosses him and a horde of goons appear. They’re ordered to kill Fox, but lucky for him they’re a terrible shot. He’s eventually injured when one assailant is able to shoot out a rope and drop some debris on him. Apparently it’s a lot harder to shoot an adult male than it is a thin rope. Batman is also alerted to the gun fire and he shows up to clean up some of the mess, but he’s not in time to prevent Fox’s injury.

As a viewer, it was hard to believe Wayne would do anything to endanger one of his friends and the presence of Batman confirms this. Eventually we find out Wayne was none other than Matt Hagen in disguise. Hagen has found a topical cream that can cover up his scars, and more importantly, turns his face into a clay-like state which allows him to mold his own features to resemble others (no explanation given for how he alters his voice, that’s just cartoons for ya). The cream, Renuyu (pronounced Renew You), just so happens to be manufactured by Daggett Industries. As we know, Daggett wants to take over Wayne Enterprises, and the encounter with Fox was supposed to result in Fox’s death which would have been the catalyst for the takeover. With Hagen’s failure, Daggett has decided to cut-off Hagen’s supply of cream. He also orders his two primary henchman, Raymond Bell and Germs, to take Hagen out as he’s now a liability.

Hollywood doesn’t have many roles for mugs like that one.

Unfortunately for Hagen, he needs the cream in order to keep working. It also has proven to be an addictive substance, though weather the cream is chemically addictive or just psychologically given it can erase scars is anyone’s guess and beside the point. Hagen feels like he needs it, and he is not willing to go without it.

Batman is of course trying to figure out what happened to Fox, oblivious at first that Bruce Wayne was framed for the attempted murder. Fox was able to tell the cops what happened, and naturally they want to speak with Bruce. Alfred covers for him while Bruce tries to figure out what happened back at the warehouse. Batman is able to trace Daggett back to Raymond Bell, who was there the night of Wayne’s framing. He tracks him down in the Batwing and runs Bell’s car off the road. In perhaps Batman’s finest interrogation, he uses the prongs on the front of the Batwing to impale and carry Bell’s car high above Gotham. Utilizing a mechanical arm, he extracts Bell from the car and dangles him over Gotham Harbor. He’s only able to find out that Wayne was not present the night of Fox’s attack, but Bell faints before he can fess up to who was behind it. The police show up and Batman is forced to hand over his prisoner. Now knowing that a Wayne imposter was present, he decides, against better judgement I’d say, to visit Fox in the hospital after hours which only makes Fox think he’s returned to finish the job. He’s arrested as a result.

In order to hide his scars, Hagen is forced to rely on a cream provided by Daggett.

Not to be outdone, Hagen also decides to do some infiltrating and heads to Daggett’s lab. Using the last bit of Renuyu he possesses, Hagen is able to slip in undetected, but not for long. Daggett and his men discover him, and in a rather disturbing scene, Daggett basically drowns Hagen in the stuff by pouring it down his throat. The “murder” is only seen via shadows on the wall, but it’s effective. Hagen survives though, and his stand-in finds him later in his car where Daggett’s men had left him, but Hagen is different. We get just a brief look at him as he glances in the rear-view mirror before the episode ends with that which is oh so frustrating:  To be continued.

“Feat of Clay” is a slow moving episode of Batman, but necessarily so. The pacing allows us to really get inside Matt Hagen and sympathize with him. He’s driven to continue his life as it was before the accident that left him scarred and disfigured at all costs. He’s probably dealing with some depression, and the addictive Renuyu is probably the worst thing for him. His friend and stand-in Teddy is also the stand-in for the audience as he tries to talk Matt out of this path, but to no avail. He loves him too much to just abandon him, but we’re left to wonder if he’ll be pushed too far in the stories to come. Daggett, on the other hand, is a pretty conventional villain. He has no redeeming qualities and is easy to understand. He’s yet another gangster type who gives birth to a super-villain, following in the footsteps of Rupert Thorne and the role he played in creating Two-Face. Still, conventional as he may be, I always liked Daggett as a villain because there’s no compromise in him or an attempt to disguise his intentions. He’s not slimy like Thorne, just a cold, hard villain. Ed Asner is also perfectly cast in the role and my affection for him probably plays a role in my liking of Daggett.

As a result of all of the attention paid on Hagen, this ends up being an episode that’s rather light on Batman. The framing plot is engaging, when used, even if it felt rather similar to Batman Returns. He’ll get back to doing what he does best in Part II, but it is still a some-what shocking sight to see Bruce Wayne in handcuffs.

The “murder” of Matt Hagen and the birth of Clayface.

Since “Feat of Clay” features some rather prominent voice actors, it’s not surprising this episode feels extra special. It also helps that the episode looks great. Hagen’s face is convincingly disfigured and the morphing properties of the cream he applies are fun to look at. Of course, we’re in for a far greater treat when Clayface truly debuts. The scene of his becoming Clayface though is almost incredible considering it’s taking place in a kid’s show. It was shocking to me as a kid and I watched with some disbelief. Also worth pointing out is the subtle personality quirks we get to see within Daggett’s gang. One guy apparently has a fear of germs (hence the name Germs) and Bell is always wearing headphones tuned to police scanners. It’s a small touch, but so often the hired muscle in these episodes are nameless, faceless, men with guns.

As the introduction for a new villain, and one that wasn’t well known outside of the comics, “Feat of Clay” is probably second only to “Two-Face.” It works in tandem with its follow-up, and I might argue it’s a more satisfying set of episodes than its predecessor. I suppose I’ll wait until I do a write-up on Part II before I make up my mind, but it should go without saying that these two episodes are among the best the show produced.

This entry was posted on Friday, February 9th, 2018 at 12:00 am and tagged with batman, batman returns, clayface, edward asner, matt hagen, Max Shreck, roland daggett, ron perlman, superhero cartoons, tim burton and posted in batman the animated series, Comics, Television. You can follow any responses to this entry through the RSS 2.0 feed.
« Walt Disney’s Snow White and the Seven Dwarfs
Dragon Ball: Season 4 »

One response to “Batman: The Animated Series – “Feat of Clay – Part I””