The Teen Titans are a super hero group consisting of all of the heroes no one cares about:  Robin, Starfire, Cyborg, Raven, and Beast Boy. They got a chance to shine in their own series, which was eventually spun-off into a satirical comedy series called Teen Titans Go! This series is basically a flash animated cartoon in which the team does little actual super hero stuff and mostly just confronts every day mundane activities in an overly dramatic way. It’s not a show I’m very familiar with, having only watched an episode here and there just because it seems to always be on Cartoon Network. My once infant son seemed to like the theme song and all of the colors, so I’d on occasion use the program to distract him for a few minutes. I’ve had people tell me it’s a really funny show, and others tell me it’s one of the worst things DC has ever done with its brand. I’m guessing if you have no affection for the comics then this show is mostly just dumb humor that’s not entirely annoying, but if you actually enjoy the Teen Titans as a super hero group then you probably have a negative opinion of this thing.

“Second Christmas” aired during the show’s first season in 2013. I may not be familiar with this show, but i am familiar with the post-Christmas blues. December 26th is often cited by me as the saddest day of the year – 364 days until next Christmas, 365 if it’s one of those wretched leap years. Boxing Day just doesn’t do it for me, and the premise of this episode is immediately appealing to me because the characters are dealing with that very same thing, and to combat it, they come up with Second Christmas.

The episode opens on Christmas morning. We get some shots of the Titans’ HQ, a giant building shaped like the letter T, and it’s all decorated for Christmas with numerous DC references. The stockings are hung by the fireplace loaded with toys and goodies, implying Santa has come and gone. I very much like that Cyborg’s stocking is a giant steel boot. The camera zooms in on a Batman alarm clock which immediately goes off at 8:00 AM. What?! You mean in a building occupied solely by kids the inhabitants stay in bed until 8 on Christmas morning? Hell, I rarely let the sun beat me to Christmas morning. When the alarm goes off, the Titans come running out from their rooms. They observe the cookies have been consumed, the milk has been drunk, and they tare through their wonderful new gifts. The gifts are supposed to be kind of funny, I take it, but the only one I like is Starfire’s Dr. Seuss inspired thing that I couldn’t possibly spell. 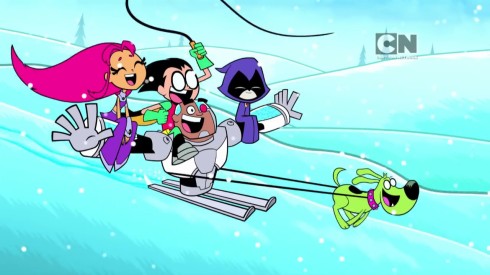 I feel like Beast Boy should really be a reindeer here and not a dog.

The Titans move onto ugly Christmas sweaters and food. The day, as it often does, goes by like a whirlwind and suddenly it’s the 26th. Everyone is feeling down except Robin, who channels my mom in this scene by gleefully pulling down all of the Christmas decorations. He’s the most straight-laced of the group and wants to get back to training and doing super hero stuff while the others just need to wallow. Starfire is less upset as she apparently has a Christmas-like holiday to attend on her home planet, or wherever she’s from. There some kind of purple dinosaur that isn’t Barney replaces Santa amid chaos and flames. Seems interesting. The others are a bit jealous that she gets to run off for more holiday shenanigans so Beast Boy comes up with the idea of telling her about Second Christmas. Raven and Cyborg play along, and they soon have Starfire convinced that Second Christmas is a real holiday complete with its own Santa, obviously named Second Santa. He’s tall, skinny, and wears a green track suit and flys around with a jet pack.

Robin is pretty willing to move on from Christmas while the others are reluctant to do so.

Robin walks in on them and immediately tries to put this Second Christmas nonsense to bed, but Beast Boy informs Starfire that Robin is the Grouch of Second Christmas and she shouldn’t listen to him and instead punch him in the face – so she does. Second Christmas suddenly becomes a thing that occurs at the expense of Starfire as the others leave it to her to re-decorate the place, cook a new Christmas dinner (consisting of junk food like pizza and burritos), and handle all of the presents and such. Somehow a Second Christmas kite becomes thing, and Starfire is very much interested in meeting Second Santa. A Dr. Seuss-like narrator also pops in to add a little magic to Second Christmas. Starfire is happy to go along with everything as she’s promised a Second Christmas miracle by Beast Boy should everything go well. 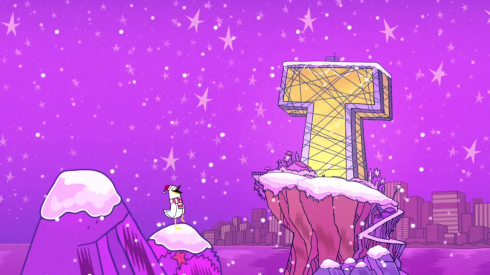 All decorated for Second Christmas.

A montage, very much a re-hash of the opening one that covered Christmas, takes place showing the Titans in celebration. Robin remains a grouch, but doesn’t continue to protest. He still gets punched in the face though for making a sour face during Second Christmas Carols. He finally voices concern when Starfire activates the many, many lights she’s strung up all over the building, drawing attention to the huge waste of money powering them all is. He notes that their generator can’t handle this much stress and tries reasoning with Starfire. He tries being sympathetic to her and explain that the others are playing a trick on her, then gets angry when that doesn’t work, only earning him yet another punch in the face. Starfire won’t be fooled by the Second Christmas Grouch, the narrator informs us as we get a look at the swelling generator. 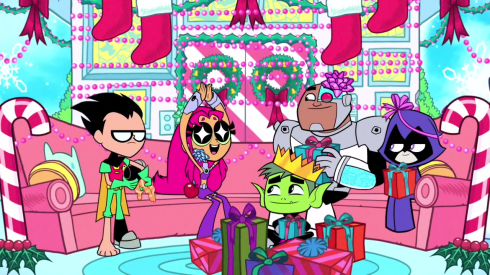 All seem quite pleased with how Second Christmas turned out, except Robin.

Inside, Beast Boy remarks how he’s beat from all of this Second Christmas celebrating and Raven and Cyborg are quick to point out how great it was. They all decide to head to bed, but not Starfire who did not miss her people’s most important holiday to not witness a Second Christmas miracle. Suddenly, the others show a bit of remorse, but they only tease copping to her about the whole thing. When they say “There’s something we should tell you,” it just leads to them bidding her good night after unsuccessfully trying to get her to go to bed herself. Robin can only look on with disappointment. 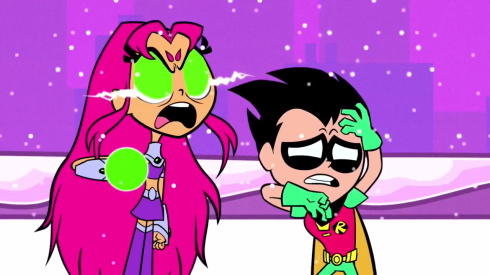 Starfire takes to the roof to fly her Second Christmas kite in hopes of spotting Second Christmas Santa. She tries to convince herself to believe, assuming that’s what will lead to a miracle, but nothing happens. The narrator comes in to recount all of the things she has done throughout the day to ensure Second Christmas was perfect. Just then, a flash of light bathes her in a warm glow! Second Santa? Nope, it’s just the elevator to the roof containing her teammates with Robin ordering them to tell her she’s been had. They finally come clean and hang their heads in shame, apologizing, but Starfire isn’t too accepting. She missed the most important day of the year for her home world for Second Christmas and she goes ballistic throwing nuclear snowballs at her “friends.” Even Robin isn’t spared as she still calls him the Grouch and punches him in the face. I’ve always thought Robin was pretty lame, but damn does he get abused in this episode.

He is real! He’s really real!

After all of the Titans are trapped in the snow, a bright light appears. Even Robin and the others wonder if this is the coming of Second Santa, while Starfire turns to the light with renewed Second Christmas Spirit. Turns out it’s just the generator overloading and soon the whole thing explodes. We fade to white and find the Titans all waking up in hospital beds. Turns out the explosion put them all into comas and they’re just now all waking up simultaneously 363 days later – it’s Christmas Eve! A Second Christmas Miracle! The creation of their fake holiday has had the intended result as the Titans were not forced to wait for next Christmas, it came! They reflect on the miraculous event, as the camera leaves the confines of the hospital room to reveal the identity of the episode’s narrator as none other than Second Santa himself. He takes to the sky in his jet pack, just as Starfire approaches a window to witness him. He gives her a wink, and writes Happy 2nd X-Mas in the sky before flying off. 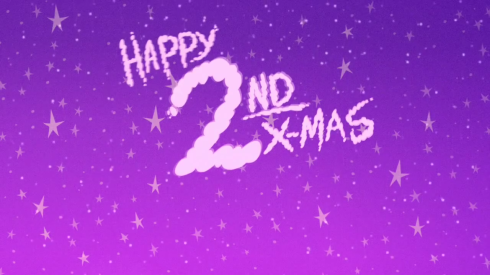 I guess I should have run this on the 26th, but there’s no way I’m doing a 26th blog entry on Christmas this month!

“Second Christmas” is a pretty silly and, at times, mean-spirited little Christmas special. It’s also strangely relatable as who likes waiting a whole year for Christmas? I mean sure we all get sick of the songs at times and there’s always a few really annoying commercials each year, but Christmas is such a wonderful time of year it sometimes gets a little sad knowing it’s just one day out of the whole year. Of course, that one day has been stretched into two as Christmas Eve is basically a holiday at this point, and the entire Christmas season is eerily undefined. At retail it basically begins the week of Halloween while many at least push it off until after Thanksgiving. And then it kind of lingers through the new year before vanishing completely as kids return to school and adults back to work. As a concept, I love this episode and I like the little flourishes that give it a holiday special vibe such as the narrator or visual gags like a snowman coming to life when Cyborg places hie head upon it. As something that’s funny or entertaining, it’s less successful as there’s really no laugh-out-loud moments, but a short running time (about 11 minutes with opening and closing credits) keeps it from over-staying its welcome. As a result, I’m pretty lukewarm on the whole thing which pretty much matches my attitude toward the series as a whole.

Teen Titans Go! is run all of the time on Cartoon Network, it’s basically that channel’s SpongeBob, so I expect this episode to air numerous times during this holiday season. If the network is smart, it’ll be shown on the 26th to really capture the mood of the episode. As of this post, it’s scheduled to air on Christmas Eve at 1 PM. The show is also available on DVD and Blu Ray and streaming in various places on the web.

This entry was posted on Saturday, December 23rd, 2017 at 12:00 am and tagged with batman, beast boy, cartoon network, christmas specials, cyborg, dc animated universe, raven, robin, starfire, super hero cartoons, teen titans and posted in christmas, Television. You can follow any responses to this entry through the RSS 2.0 feed.
« Dec. 22 – Johnny Bravo: ‘Twas the Night
Dec. 24 – Chucklewood Critters: T’was the Day Before Christmas »