Dec. 4 – ‘Twas the Night Before Christmas 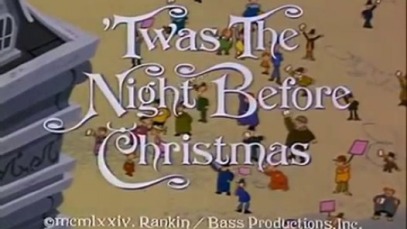 Rankin/Bass is almost synonymous with Christmas because of the many television specials the company produced in the 60’s and 70’s. Most people associate them with the stop-motion process used to create Rudolf, but the studio also did traditional animation as well. Most famously, “Frosty the Snowman” was done in this style and the next most popular is the subject of today’s post:  “‘Twas the Night Before Christmas.”

For hand-drawn animation, Rankin/Bass relied on Topcraft out of Japan, which would eventually become a part of Studio Ghibli. If you’re expecting Ghibli level quality though, you’ll be pretty disappointed in “‘Twas the Night Before Christmas.” The characters do have a very slight anime look to them, but otherwise there’s not much here that gives away where the animation originated or what the studio would go on to produce.

“‘Twas the Night Before Christmas” is loosely based on the 1832 poem “A Visit from St. Nicholas” which opens with that line. That poem focuses on what is essentially the last three minutes or so of this special, so the folks at Rankin/Bass had to come up with a plot to lead up to that and make it interesting. This isn’t an unfamiliar position for the writers there as basically all of their specials had to do the same. In this case, the story they came up with isn’t too bad, though it’s pretty odd that they felt the need to include a family of mice as part of the protagonists. And they also felt that waiting for Santa to arrive needed to be more suspenseful, so we get a thin-skinned and vengeful Santa as a result. 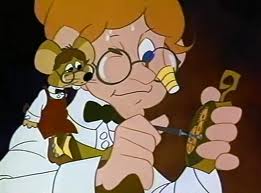 Father Mouse and Joshua have some kind of relationship with one another that really isn’t explored.

The story takes place around the turn of the century in a fictitious town called Junctionville. The story follows the Trundles, a family of four who’s patriarch Joshua is a clock maker, and the mouse family that dwells in their home. It unfolds as a flashback, with the special opening on Christmas Eve with narrators Joshua and Father Mouse nervously waiting to see if Santa will arrive. And that anxiety is born from a letter that appeared in the town paper claiming Santa Claus isn’t real. Apparently the paper receives distribution in The North Pole because Santa sees it and, furious it calls his very existence into question, returns the town’s Christmas letters. Father Mouse is able to figure out his own son Albert is the one behind the letter and confronts him with the rest of his family. Albert is a brainy kid who can’t possibly allow himself to believe in Santa (even though he himself is a talking, clothes-wearing mouse) and owns up to writing the letter with his friends. Father Mouse is upset and scolds his son ordering him to write another letter and apologize, but Albert won’t go against his own convictions, which is rather noble in a way.

Meanwhile, Joshua Trundle devizes a plan to create a clock tower on town hall that will play a song welcoming Santa on Christmas Eve, as as sort of mea culpa. The mayor and town council are welcoming of the idea and Trundle gets right to work. When the big unveiling occurs ahead of the holiday (and judging by the setting, it would appear it took place during the fall, but still well in advance of Christmas), the clock malfunctions and the mayor is embarrassed. So embarrassed is he that he won’t even allow Trundle to attempt a repair opting instead to just let the broken clock exist in perpetuity (I really hope this guy didn’t get re-elected). The public failing on the part of Trundle means no one trusts him with their own time pieces and his business takes a severe dive. He and his family are plunged into poverty with their pathetic looking Christmas tree serving as the most obvious statement of their present condition. The Mouse family feels the pinch too as few crumbs are making it to them forcing them into a sort of starvation as well.

It’s soon revealed that the reason for the clock’s malfunction was Albert poking around inside the clock. Father Mouse is apparently a clock maker himself, I guess, and his son has an interest in it. When he learns this he tells Albert he can’t sit around feeling sorry, he has to own up to what he did and solve the problem. Since Trundle can’t get in there it falls to Albert to repair it (I guess it’s a bit of hard parenting that his dad doesn’t go with him, but it sure feels like he should have) which is what he sets out to do. On Christmas Eve.

The Trundles and all of the people of Junctionville are forced to wait and hope, not all realizing they’re depending on a mouse, that the song will play and Santa will come. Of course it does, or else we would never get to that poem, precisely a minute after midnight. Santa was on his way past Junctionville, but hearing the song, he turns around and heads for the Trundle residence. The family gets to watch the little fat elf do his thing, with broadcast standards in the 1974 allowing Santa to puff on his pipe the whole while. He’s a short little bulbous thing, with read cheeks and a red nose that are illustrated in such a way that they look like sunken in welts on his face. He is kind of elf-like, which isn’t a common depiction, and he lacks a mustache to pair with his beard. They clearly were trying to make him look as the poem describes, but I always kind of hated how this Santa looked even as a kid, mostly due to the red welts. If they weren’t solid red splotches and instead were just light reddening of the cheeks he’d probably look fine. 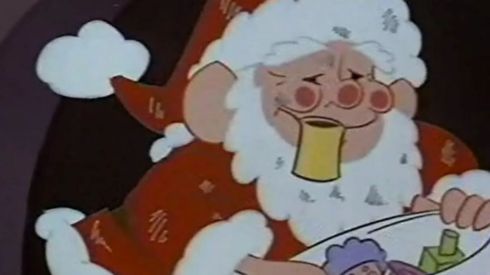 Smoking on the job. Between his bad habit and tendency to go down chimneys I’m betting he’s got quite the set of black lungs.

The special is some-what compelling for an adolescent, not so much for an older viewer since we know there’s no way Santa is skipping town. There are a few musical numbers that are admittedly catchy, and I would go so far as to say that “Christmas Chimes are Calling Santa” is actually pretty good for a Christmas song. The rest of the special has an odd feel though. Why is Santa so easily hurt by one letter? It was signed “All of Us” as a way of explaining why Santa would take his anger out on the whole town, but I thought this guy was a bit more omniscient than that? It feels rather cruel. I also must point out that this special features perhaps the worst reindeer of any special. They’re tiny and look like mice. Once more, I understand they have a poem to work from that does indeed call them eight tiny reindeer, but that doesn’t mean I have to like them. At least there are indeed eight. 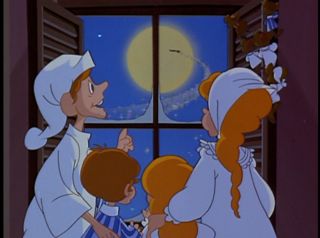 The rest of the cast of characters in this one are either bland or unlikable. Father Mouse comes across as a kind and understanding father, but Trundle is a push-over. The rest of the respective families, besides Albert, are basically ignored. I’m guessing the people who really like this special enjoy it mostly for the music or they find the plot interesting when compared with other holiday specials. It’s not terrible, and there was a time when I really liked it as a kid, but as an adult I’m not really into it. I’ll watch it once and that’s enough, which is how I feel about most of the Rankin/Bass stuff.

This entry was posted on Monday, December 4th, 2017 at 1:00 am and tagged with 1970s christmas specials, christmas specials, father mouse, rankin/bass, santa claus, trundles and posted in christmas, Television. You can follow any responses to this entry through the RSS 2.0 feed.
« Dec. 3 – Duck the Halls: A Mickey Mouse Christmas Special
Dec. 5 – The Adventures of Teddy Ruxpin: Winter Adventure »

One response to “Dec. 4 – ‘Twas the Night Before Christmas”