One of the underplayed downsides to the death of the arcade in America is the amount of arcade games that remained solely in the arcade realm. Arcade technology was always ahead of what was available in-home. Arcade cabinets were also often equipped with 4 or 6 player possibilities while virtually every home console in the 80s and 90s could only natively handle 2 players. Sometimes, companies would release two distinct games for the arcade and the home console. While gamers were enjoying co-op play with X-Men at the arcade the home console gamer was forced to experience Marvel’s most famous mutant team via a hideous top-down shooter/action game with horrendous technical issues. X-Men was a popular enough arcade game that it would eventually be released digitally about 20 years after it first hit arcades. It took awhile, but it made it. Other games were not so lucky, and one of them is Bucky O’Hare.

Bucky O’Hare has been a topic more than once here as I take a small sense of pride in being one of the small areas of the internet where Bucky can still exist. Bucky originated in the comics, and when the Teenage Mutant Ninja Turtles exploded he was one of the main beneficiaries. Suddenly, toy companies and television studios were scooping up licenses for any kind of anthropomorphic action series that could be tossed in front of children to make piles of money. These properties were often fast-tracked to the consumer as everyone assumed the TMNT were just some fad that would die a quick death. This meant television shows, toys, and even games were all put into development at around the same time and Bucky O’Hare got the full treatment. So even though the cartoon series would only last 13 episodes and see a quiet cancellation, the aspects of the license that took the longest to develop would still see release after the fall of the show. 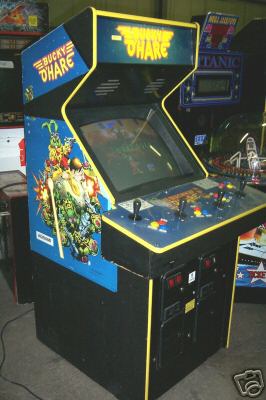 Good luck finding one of these.

Most people into retro-gaming or who had a Nintendo Entertainment System back in the day are familiar with Konami’s Bucky O’Hare for the NES; the Mega Man clone of surprising depth and skill. It’s become a bit of a cult hit these days and copies of the NES cart fetch a pretty decent price on the after-market. Lesser known, is Konami’s Bucky O’Hare game for the arcade, also simply titled Bucky O’Hare.

Like most of Konami’s  arcade games for licensed properties, Bucky O’Hare is a 4-player beat-em-up where the player takes on wave after wave of enemies before reaching the game’s conclusion. And like most games of this style, it sometimes feels like it was designed first and foremost to eat quarters and force gamers to spend a decent chunk of change in order to see the game to its conclusion. Where Bucky O’Hare differentiates itself from Konami’s other brawlers is in that the primary attack for each character is a projectile. All four characters; Bucky, Jenny, Deadeye, and Blinky – all possess a handgun to shoot at the bad guys with. This naturally allows the player to maintain some distance between them and the enemy which actually seems to result in fewer deaths when compared with X-Men or Turtles in Time. Each character also possesses a special attack, referred to as a gimmick weapon, that can be activated at any time and surprisingly doesn’t cost any health to activate. There’s also bomb attacks available and they’re pretty abundant and clear the screen of enemies or deal a significant chunk of damage to a boss, which feels really generous for a game of this genre.

The game is enjoyable with one of two players, but these ones are always best with four.

The game also further distinguishes itself in style. The previously mentioned gimmick weapons though are sadly the only thing that really differentiates the characters. Of the four, I found Deadeye to be the most useful (though you would think a four-armed duck would possess more than one pistol) as his weapon is basically a temporary shield that orbits around him until it hits something. Jenny’s is a homing attack that’s also useful, though her attack animation is a liability. Bucky just tosses a bomb forward, and Blinky has a flame-thrower. Most of the levels move from left to right, but there’s variety from stage to stage. Some levels have the characters moving at an angle towards the screen (think the second stage from the first TMNT arcade game) and there’s a stage where you’re falling and another where the characters are all riding Toad Croakers that can even stomp on the enemies. Brawlers can get quite stale by design, and Bucky O’Hare does as good a job as any in keeping things as fresh as possible for the game’s duration (of roughly 45 minutes). 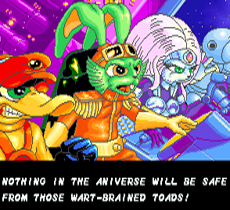 Minimally animated, but fully voiced, cut scenes help to move the story along.

Perhaps surprisingly, the production values on Bucky O’Hare are quite high. It’s very bright and visually appealing with all of the characters looking like the source material. Bucky is the only one that looks a bit off to me, and Blinky is definitely too tall, but for the most part the characters and animations look great. The enemies are especially striking, though the variety is not great as you’ll mostly spend the game fighting Toad Storm Troopers and these little robots. The boss characters look awesome though and they’re mostly taken straight from the cartoon series. Toadborg is appropriately menacing looking and the final battle is against a Komplex-to-Go contraption that even looks like it’s suffered some damage since its encounter against Bucky in episode 13 of the series.

You’ll be killing lots of Toad Storm Troopers in this one.

Which brings me to the aspect some Bucky fans seem to appreciate most is that this game seems to take place after the cartoon ended and serves as a nice book-end to the series. You take the fight straight to the Toad homeworld and vanquish Komplex seemingly forever. Konami made liberal use of the voice talent from the show and only a couple of voices are off (Blinky most notably being voiced by Scott McNeil). Even characters who aren’t playable still make voiced appearances like Willy and Bruiser. And if you’re into the comic, the omniscient mouse race that never made it into the series shows up in this game and it really feels like someone at Konami really cared about the representing the license as best as possible. It’s pretty cool considering they must have known already that this was to be the last major release for the license and that no season two was coming for the animated series. 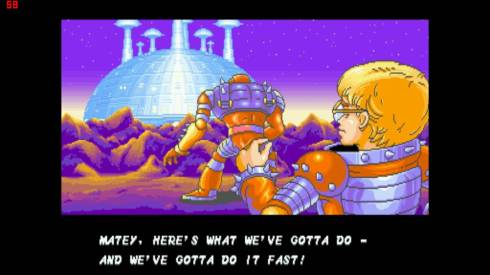 Willy and Bruiser even get to cameo in some cut scenes.

Bucky O’Hare for the arcade is a satisfying experience, especially so for fans of the license. It possesses some of the short-comings inherent with the genre, and I do wish a character like Bruiser or Dogstar was playable as neither was in the NES game, but this is a fun title worth tracking down. Of course, being that it’s been over 25 years since the game’s release, it’s unlikely you’ll be able to find a cabinet in the wild and it’s even rare to see them come up for sale on eBay. There are other means available to you, if you want to seek them out, and I’ll let you research that on your own should you wish to play it. Sadly, licensed games like these rarely receive a digital release in this day and age, but maybe this very mild Bucky comeback in 2017 could lead to a digital release of this game and the NES game, though I certainly wouldn’t hold my breath for either.

This entry was posted on Friday, June 2nd, 2017 at 11:35 am and tagged with arcade games, bucky o'hare, continuity comics, konami, neal adams, the toad wars and posted in Comics, Television, Video Games. You can follow any responses to this entry through the RSS 2.0 feed.
« Danzig – Black Laden Crown
The Other Disney Afternoon Games »