It’s been nearly two years since Lego unleashed its version of the famed Ecto-1 from the movie Ghostbusters. It’s been even longer since a concept for that vehicle,, as well as the firehouse appeared online. When Lego opted to only do the Ecto-1 set I thought that was it for the firehouse and Ghostbusters fans would have to make due with one very fine set. Imagine my surprise when an email showed up on my account from Lego advertising the new Ghostbuster Firehouse set. I don’t usually keep up to date with toy news so this came as a shock to me. I was quite delighted with what I saw, but a case of sticker shock tempered my enthusiasm some. I got past that though, and would end up making the most expensive toy purchase of my life.

How much is too much for a set of plastic building blocks? Especially when the purchaser is an adult. I don’t know, but it can’t be much more than the $349.99 MSRP for the Ghostbuster Firehouse. Set number 75827 is indeed a pricey one but it’s also an impressive one. Totaling over 4600 pieces, the iconic firehouse is a mighty 2 feet in height and just as long. Multiple hinges make it very accessible on the interior and the three-floor layout provides optimal space for the nine mini figures and three ghosts it comes with. The interior is surprisingly movie accurate, in particular the first floor with the placement of Janine and Venkman’s desks. Pretty much everything important from the films is present including the fire pole, “dancing” toaster, and containment unit. When compared with the layout of The Simpson house, it blows it away in terms of screen to brick accuracy, which is what many adult collectors care about most.

A cut-away look at the completed house.

With such a large assortment of pieces, the build process is a slow one. Not being one who has extensive experience with Lego sets, it took me a solid week to complete the set basically spending a couple hours per night. I didn’t try to go too fast and wanted to savor the build as it’s what is most fun about these things. Lego sets are like puzzles but with way better results. Because the building is so large, some parts do get a bit tedious. In particular, the actual exterior of the building. Lego tries to break that process up as much as possible but it’s an unavoidable reality of such a set. Other limitations of the set include the lack of a basement, but Lego made the wise choice to tuck the containment unit in under the stairs. Ecto-1 fits inside, but not all the way without removing Janine’s desk, which is unfortunate, but understandable since the set is already pretty damn big. The bedroom layout is not exact to the film either, but sacrifices have to be made somewhere. Lego still managed to fit all three beds into the room without making it look ridiculous.

The set includes nine mini figures and three ghosts, one of which is Slimer. Expectedly another set of Ghostbusters are included. For the most part, they’re the same as the four included with Ecto-1 but with a couple of differences. For one, each character now has the no ghosts logo on their sleeve which looks nice. Winston has a different, and better, hair piece so he looks less like Billy Dee Williams. Venkman is the only true variant though as he comes slimed from his first encounter with Slimer (he too sports a superior hair piece to the one that came with the Ecto-1 set). He looks great and I am particularly fond of his angry face. Janine is also included, as are possessed versions of Dana and Louis. Louis even comes with a second head that includes a chin-strap so he can wear a colander on his head to recreate the scene where Egon checks him out. The library ghost is featured and she has a second hair piece to go from calm book reader to screaming ghoul. The ghost from the taxi cab is also included. He looks good, but is kind of an odd choice since he doesn’t have his car and the set really misses Walter Peck. I suppose Peck is generic enough looking that one could find a decent substitute somewhere. Slimer looks great and has movable arms. The other two ghosts are suitable and kind of remind me of the generic ghosts that came with the old action figures. Three transparent stick-like pieces are included for each ghost to simulate flight. All in all, the set includes a nice assortment of mini figures.

The Ghostbusters come armed with proton packs that have to be assembled. They’re the same as the packs from the Ecto-1 set. They also have traps (which look better than the one that came with the Ecto-1 set) and walkie talkies and Egon has a PK Meter. Clutter abounds in the firehouse in the form of magazines, news papers, and cardboard boxes. They seem simple, but add a nice touch of authenticity. The best little nugget of the set though goes to the sticker on Venkman’s backboard which has a note on it that says “R.I.P. H.R.” for Harold Ramis. Way to make it dusty in here, Lego.

If you love the Ghostbusters and have the extra coin laying around, this is one hell of a set and a fun way to spend some free time. The end result makes for an impressive display and if you have kids that you trust, it’s probably pretty fun to play with too. It blows away that old firehouse toy I had when I was a kid (I love how the fire pole accessory here is basically the same concept as it feels like a callback to my old, beloved, toy) and it’s easily the finest Lego set I’ve ever purchased. I can’t think of another set that would make sense for Lego to produce based on the Ghostbusters. I suppose they could do a rooftop scene from the climax of the first film but I don’t think I’d be interested. A big Lego figure of Stay-Puft would be awesome though! I don’t know if this set is worth $350, but I did have fun with it and I don’t regret my purchase. A job well done, Lego! 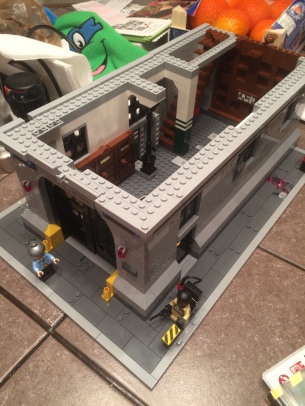 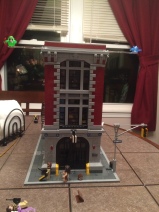 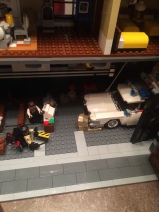 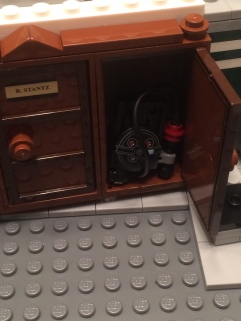 This entry was posted on Sunday, February 7th, 2016 at 9:53 am and tagged with bill murray, Dan Aykroyd, ecto-1, Ghostbusters, Harold Ramis, lego, slimer, the real ghostbusters, venkman and posted in Film, toys. You can follow any responses to this entry through the RSS 2.0 feed.
« #1 – Dr. Seuss’ How the Grinch Stole Christmas!
Nausicaä of the Valley of the Wind »