Invader Zim is a short-lived Nicktoon from the early part of the century. Most Nicktoons seem to have a short lifespan but Zim’s was especially short. Either the show failed to perform well or network executives were not onboard with its tone and brand of gross, snarky, humor. Since its cancellation it has established a cult following and DVD sales performed modestly. In its short life it also produced a Christmas episode, which is all we care about for this post.

Invader Zim tells the story of Zim, a doom-obsessed alien sent to earth to conquer it, but not expected to, by his superiors. Zim arrives on earth and disguises himself rather poorly as a human adolescent. Lucky for him, this version of earth is even more self-absorbed than our actual earth and basically no one ever notices Zim’s obvious alien lineage. All except one boy, Dib, who’s an outcast among his peers and is left to combat Zim all by himself. 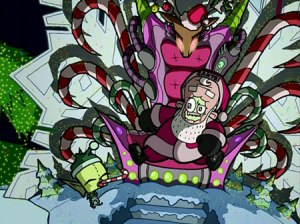 Santa Zim atop his hideous throne.

Zim is a woefully incompetent invader. Despite his incredible technological advantage, he’s incapable of creating much mayhem on earth. In “The Most Horrible X-Mas Ever,” Zim decides to take advantage of humanity’s love for Santa Claus and disguises himself as the jolly old elf in an effort to convince the humans to board prison ships that will deliver them to his alien overlords. Zim crafts a Santa suit that incorporates all of the elements that make Santa, Santa. Unfortunately, Zim’s suit is too similar to the real thing and it ends up taking over Zim, making him nice. Further complicating his plans is Dib, who’s usually useless father is actually of some help for him in this episode because he has a hatred of Santa Claus.

Invader Zim’s humor could probably be described as dark. The look of the show is very stylized with lots of straight lines. There’s a slight anime influence at times, but mostly the show reminds me of AAAAAHHH Real Monsters in terms of looks. Zim is prone to saying “doom” a lot and the show seems to find something funny about moose, with the presence of a moose item often being relied upon as a joke by itself. The show can be rather hit or miss, but “Most Horrible X-Mas” ever is mostly hit and it’s amusing to see the show’s impression of how blissfully unaware society can be of something obviously dangerous.  It’s another off-beat kind of Christmas special, which this list has been heavy on so far, but I promise more traditional ones are still to come.

This entry was posted on Friday, December 4th, 2015 at 12:00 am and tagged with christmas specials, invader zim, jhonen vasquez, nickelodeon, nicktoons and posted in Best of Christmas - TV, Television. You can follow any responses to this entry through the RSS 2.0 feed.
« #23 – Robot Chicken’s Half-Assed Christmas Special
#21 – Married… with Children: You Better Watch Out »