When I started this feature I swear I did not intend to list the best cartoons aimed at children, that’s just how it’s worked out so far. I promise the next few are going to trend older. That said, Gargoyles is a pretty terrific show whether you’re 8 or 18. The show borrowed heavily from comics and was obviously influenced by the likes of Batman and X-Men. Like most cartoons geared towards boys, the show featured plenty of action but also contained plenty of drama. It asked a lot of its viewers, opting for a more serialized narrative structure with numerous callbacks to older episodes. Sometimes, plots required multiple episodes to develop and pay-off which is probably one reason why the show aired weekdays as opposed to Saturday mornings (though the final season was moved to Saturdays). Lastly, as a Disney produced and developed cartoon show, the program featured slick animation and stellar production values all around.

Gargoyles first began airing in 1994 and centered around the character Goliath, the leader of a clan of Gargoyles displaced by time and forced to adapt to life in New York City. The premise for the show was established over the first five episodes and the lore of the world is firmly established here. Gargoyles are beast-like creatures that are active at night, and stone by day. During the middle ages they protected a castle inhabited by humans in Scotland but were betrayed with most of the gargoyles destroyed while they slept. Magic is also a part of this world, and the remaining gargoyles that survived the attack were placed under a spell that would keep them stone until the castle they inhabited rose above the clouds. Of course, this would happen when a man by the name of David Xanatos purchased the castle and placed it atop a skyscraper in New York. 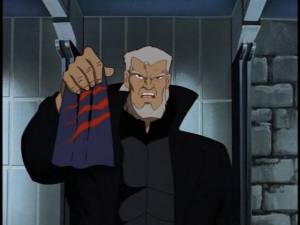 MacBeth is one of the more prominent antagonists in the series.

Over the resulting episodes, the gargoyles would come to view Xanatos as an enemy, as well as many others. Surviving outside of the curse is Goliath’s old flame, Demona, a female gargoyle who is like the Magneto to Goliath’s Xavier. She wishes to exterminate humanity while Goliath sees value in forging alliances with people and serving as their protectors. Goliath and his clan, consisting of fellow gargoyles Hudson, Broadway, Lexington, Brooklyn, and Bronx, forge a bond with detective Elisa Maza and basically become protectors of New York. They don’t run around like Batman, but their presence draws out and attracts the attention of various foes, many from the past. Some are more interesting than others. Throughout the series, Demona is a worthy foe for the clan. She’s ruthless and cunning, and even though she often finds herself on the losing side the writers manage to maintain her credibility as a villain. MacBeth is another stand-out foe. He and Demona share a bond as a result of a curse and neither one can die unless the other is killed which makes for an interesting dynamic. MacBeth is no friend to Goliath and company, leading to numerous instances where the gargoyles are caught between MacBeth and Demona, who despise one another.

Stylistically, the show is quite dark. This is to be expected since the primary protagonists are only active at night. The gothic influence in the look and music invite comparisons to another well-regarded cartoon; Batman: The Animated Series. So natural was the likeness that Batman producer Bruce Timm was asked about the show more than once and was said to be not a fan of Gargoyles. The tone of the show was certainly quite serious, even melodramatic. The serialized nature of the show and the human/gargoyle dynamic make it seem more comparable to X-Men, particularly the first two seasons. There’s even a beauty and the beast vibe going on (and the allusions were quite literal in one episode) between Elisa and Goliath. Their relationship starts off professional early on and gradually develops into something more. If you’re looking for pay-off though, you’ll have to consult the not safe for work fan-fiction of a few a diehards (you may want to enable safe search between doing a google image search of Elisa and Goliath) scattered across the internet. 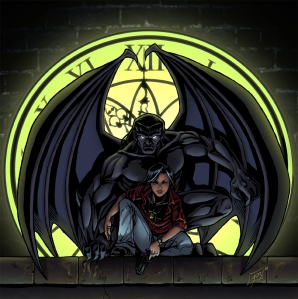 Goliath and Elisa share a bond bordering on love that only intensifies as the series goes on.

One thing that Gargoyles did that I can appreciate is that it added to its cast. In X-Men, several mutants and other heroes would cameo on various episodes. These characters, like Archangel and Nightcrawler, were members of the team in the comics but would never join the roster on the television show. This used to bug me, though I understand why the show runners would want to try and keep the cast as manageable as possible. Gargoyles expanded its roster during the second season and it was cool to see. Villains were also eliminated or changed while others, like Xanatos, would become grayer as the series progressed.

Where the show opens itself up for criticism is within its tone and scope. Two things that I consider a strength, do sometimes bog it down. The show is so grim at times it feels joyless. There’s moments for comedic relief but not a lot when compared with contemporary programs. The show also became burdened with the lore it created, particularly during the last half of season two, and sometimes the show felt like it was becoming too big for its own good. It’s no surprise that the show kind of fizzled out towards the end and the final third season is rather poor.

Gargoyles earns its place on my list of top animated television shows because it scores very well across the board, even though it doesn’t quite knock-it-out-of-the-park in any one category. Though maybe I should amend that last sentiment because I’ve underplayed how stellar the animation is for a televised program. The first season especially is borderline feature-film worthy, which is something Batman can’t even boast. Gargoyles is a really unique program when compared with the other Disney Afternoon shows and it would be nice to see Disney try to revive the franchise in at least a small way (cough KingdomHeartsThree cough).

If you’re interested in reading more of my thoughts on Gargoyles, you can fine reviews for the three DVD releases here, here, and here as well as read my arguments for why it should be included in a popular gaming franchise here. Enjoy.

This entry was posted on Thursday, July 2nd, 2015 at 11:54 pm and tagged with animation, batman the animated series, bruce timm, disney, disney afternoon, goliath, greg weisman and posted in Best of Animation - TV, Comics, Television. You can follow any responses to this entry through the RSS 2.0 feed.
« #9 Best in TV Animation: The Ren & Stimpy Show
Walt Disney’s The Jungle Book »