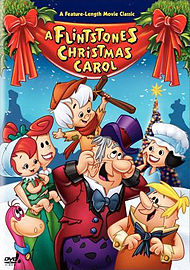 That’s right, it’s December! Which means The Nostalgia Spot starts to become more like The Christmas Spot as I attempt to spread holiday cheer through my little blog-spot. The first (and last? I’ve been slacking lately) Christmas entry this year belongs to The Flintstones: The Modern Stone Age Family. The Flintstones were the first cartoon family to break through in prime-time television slots in the 1960s paving the way for future animated shows like The Simpsons and Family Guy. Even though the last episode of The Flintstones debuted in 1966, the family maintained a strong presence through spin-offs and television specials for years to come, even into the 90s.

One such special from the 1990s is A Flintstones Christmas Carol, yet another take on the venerable Dickens story of A Christmas Carol. The special first aired in 1994, and naturally, a lot of the actors who made these characters famous were no longer around. The two most notable were Mel Blanc, the man of a thousand voices, who voiced Barney Rubble and Alan Reed who voiced Fred. Taking over for those two, are Frank Welker and Henry Corden. Welker is quite famous for his voice-over roles on numerous programs, but the less known Corden is the standout as his Fred is nearly indistinguishable from Reed’s. The cast, as a whole, is quite fine and the improved animation of the 1990s serves the Flintstones quite well.

The DVD release of the special includes the classic episode from the original series, Christmas Flintstone. This was the first Christmas episode of the series and was a part of season 5. In it, Fred decides he needs to earn a little extra money for Christmas shopping so he gets a part-time job as a Santa Claus impersonator at a local department store. He does such a good job that he attracts the attention of Santa’s elves, who are looking for someone to fill-in for the big guy as he’s come down with a bad illness. Fred, who is a lover of all things Christmas, obliges and accompanies the elves in the sleigh as they fly around the world delivering presents. Santa even takes care of Fred in the end by getting gifts for the family.

In Christmas Flintstone, Fred fills in for an ailing Santa Claus.

As far as bonus features go, Christmas Flintstone is pretty awesome but the main event is A Flintstones Christmas Carol. With a running time of 70 minutes, it’s clearly the main course. In this special, the Rubbles and Flintstones are taking part in a local play of A Christmas Carol. Fred landed the lead of Scrooge and has let stardom go to this head. He’s consumed with his acting and inadvertently ends up coming across as rather mean when engaging with his costars. Naturally, they’re all pretty fed up with Fred as a result. In addition to being a jerk, Fred forgets to purchase presents for his family and neglects his daughter by not picking her up at “cave care.” When the play starts, several actors and actresses end up coming down with the Bedrock Bug, a flu-like illness making the rounds, forcing Wilma to step in for several parts. The whole thing takes on a metta feel as Wilma’s real frustrations with Fred rear themselves during the play, forcing Fred to reflect on what an ass he’s been. As the play goes on, Fred experiences the same emotions as Scrooge, and like Scrooge, is a better person in the end.

In A Flintstones Christmas Carol, Fred plays a convincing version of Scrooge, too convincing for Wilma.

A Christmas Carol re-telling is the most tired version of any Christmas special. A Flintstones Christmas Carol at least attempts something different with how it’s version of Scrooge is forced to confront his past transgressions and improve himself in the end. It’s a little annoying how little it regards the past Christmas specials. Previously we were shown that Fred is a Christmas die-hard but in this special he’s almost indifferent to the season. Perhaps he’s just so consumed with his own brand of method acting that his usual Christmas spirit is suppressed, but it’s still hard to accept. Especially considering the inclusion of Christmas Flintstone as a bonus feature. The end result is that the bonus episode is the better viewing experience. One thing that does bother me about this special is the lack of creativity with the Flintstones technology. During the series, modern technology was included in creative ways, mostly by having the dinosaurs act as pseudo slaves to the people of Bedrock. Here there’s really no attempt to explain how they’re able to include holograms in their play or how a department store could possess a silent alarm. It feels rather lazy, and it’s something I noticed in another 90s Flintstones Christmas special:  A Flintstone Family Christmas. Nonetheless, A Flintstones Christmas Carol is entertaining by itself, if a bit redundant considering all of the other versions of A Christmas Carol out there. It’s cheap in most places though, so if you’re out at the store looking to pick-up something to add to your Christmas queue this holiday season, it won’t hurt to drop five bucks on A Flintstones Christmas Carol.

This entry was posted on Saturday, December 6th, 2014 at 2:08 pm and tagged with a christmas carol, animated specials, christmas specials, flintstones, hannah barbera and posted in Television. You can follow any responses to this entry through the RSS 2.0 feed.
« Demon’s Crest
Home Alone 2: Lost in New York »