Last weekend I posted my final review for the Danzig LP’s, but that doesn’t mean I’m done with Danzig!  Far from it, as there’s still a few more items that require attention.  If you’ve been keeping track, I’ve posted a review for all nine studio albums plus a summary of the soundtrack only songs that have seen release over the last 20+ years.  That still leaves the EP’s, The Lost Tracks compilation, and the Black Aria releases; all to be addressed in good time.  This post will take a look at live releases and the EP’s, specifically Thrall-Demonsweatlive.

It might surprise you to know that the two best selling Danzig releases (and the only two to reach gold status) are the 1988 self-titled album and the 1993 EP Thrall-Demonsweatlive.  This is, of course, due to the popularity of the “Mother” track which saw a re-release for radio and MTV when Thrall hit stores.  “Mother” was originally released as a single for the first album, but it struggled to find airplay on mainstream rock radio stations.  It had an even harder time finding an audience with MTV and the network determined the video was “too Satanic” and refused to play it without some editing done.  Danzig balked at censoring the video, so the label instead released a home video (simply titled “Danzig”) that contained all of the music videos shot for the first album as well as some behind the scenes interviews with the band.

Side B of the picture disc release.

In between Danzig III and Danzig IV, Glenn Danzig approached the label about doing an EP.  The label wasn’t too keen on the idea, but according to Glenn he was able to to get them to agree to put one out after pointing out how well Alice in Chains had done with the Jar of Flies EP.  Once the agreement was in place, the band hit the studio in between tours to record a couple of original tracks and one cover.  The two originals ended up being “It’s Coming Down” and “The Violet Fire.”  Joining them for the Thrall portion of the release was a cover of the Elvis tune “Trouble.”  The band had been working on this cover ever since the Samhain days but had never found an appropriate place to release it.  Those three tracks comprised what was called the “Thrall” portion of the release, and were paired up with four live tracks that made up the “Demonsweatlive” part of the album.  These four tracks were all taken from the band’s Halloween gig at Irvine Meadows in 1992, they are:  “Snakes of Christ”, “Am I Demon”, “Sistinas”, and “Mother.”  There’s also one hidden track on most releases, a slightly remixed version of “Mother” often referred to as “Mother ’93.”  To my ears, it doesn’t sound any different than the original version.  It was this version of the song that was made into a new music video featuring nothing but live shots which found an audience on MTV.

The studio tracks on this release are pretty solid, with “It’s Coming Down” becoming a staple of most live setlists ever since.  I personally prefer “The Violet Fire” for its more groove-oriented pacing.  The live tracks are all pretty ferocious and played faster than they were on the albums.  Glenn almost growls the lyrics for most of them, with the exception of “Sistinas” which features his signature croon.  I know a lot of people who prefer the live version of “Sistinas” to the album version, to me, both are excellent.  The live version of “Mother” is superior to the album version as it captures a different kind of energy that really lends itself well to the rebellious lyrics. The rest of the setlist from the Irvine Meadows show would pop up here and there one track at a time on various singles.  The majority of it would be released on 2001’s Live on the Black Hand Side.  Live on the Black Hand Side is Danzig’s only other live release and the band’s only full-length live album.  It’s a two disc set that captures the band’s peak in the mid 90’s as well as the Satan’s Child tour from 2000.  Disc 1 is split between the Irvine show and a Seattle show from the 4p tour.  The track-listing is like a greatest hits album, and the first disc is a nice piece to own.  Disc 2, on the other hand, is a disaster.  The audio quality, perhaps because the shows took place in smaller venues, is garbage.  The track-list is pretty solid, though there are a couple clunkers, but the quality ruins it.  Glenn’s vocals are often hard to make out and the band sounds thin.  Live on the Black Hand Side can be a tough album to track down these days, but is only worth doing so for the hardcore. 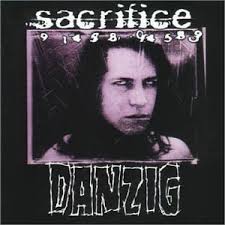 The only other EP put out by Danzig is the Sacrifice EP.  It was originally released as a single that contained six tracks, all remixes of the of the song “Sacrifice.”  It was re-released in 2000 by E-Magine with additional tracks added; remixes of “Deep” and “Serpentia.”  The original version did have a limited vinyl pressing for you completists out there, while the re-release was CD only.  It’s a release for the hardcore only, as none of the remixes improve upon the original songs, and in the case of both “Deep” and “Serpentia,” the original song wasn’t that great to begin with.

Thrall-Demonsweatlive is a must own for Danzig fans.  The studio tracks are solid and the live ones entertaining.  It was released on CD and cassette initially, but also had a German picture disc release that can be hard to track down these days.  The front cover of all of the releases features artwork by Simon “Biz” Bisley who would go on to do a lot of illustrations for Danzig.  The reverse image of the picture disc features a bare-chested Glenn Danzig from Irvine Meadows, an image also included inside the CD booklet.  The booklet for Live on the Black Hand Side features dozens of live shots from throughout the band’s existence and is arguably the best thing about the release.  The front cover is atrocious though and very amateurish.  There’s not much noteworthy to say about the packaging for any of the Sacrifice releases, save for it does include that image of Glenn spreading his arms melded with the skull logo.

This entry was posted on Saturday, February 25th, 2012 at 2:42 pm and tagged with american recordings, e-magine, eerie von, glenn danzig, live on the black hand side, sacrifice, simon bisley, thrall and posted in Danzig, Music. You can follow any responses to this entry through the RSS 2.0 feed.
« Twisted Metal (2012)
The Amazing Spider-Man and Reboots »

One response to “Danzig: Thrall-Demonsweatlive +”