If you frequent this blog you may have noticed that I do not post many negative reviews.  That’s because, for the most part, I’d rather talk about things I like and enjoy and not things that irritate me or make me mad.  There have been some exceptions.  I set out to review all of the Danzig releases which meant reviewing the good and the bad.  I also reviewed the X-Men trilogy which meant having to review the less than stellar third film.  Otherwise, I think most reviews have been fairly positive, especially the video game ones.  I suppose there’s a first time for everything, but it does pain me that my first negative video game review on this blog is going to be about a franchise I adore; Twisted Metal.

Twisted Metal made its return to livingrooms across the globe this past Valentine’s Day.  I recently made an entry in my Greatest Games feature praising the last home entry in this series, Twisted Metal Black, which came out over 10 years ago.  The new game, simply titled Twisted Metal, was announced a couple of years ago at E3 in grand fashion complete with a live-action Sweet Tooth driving his famous ice cream truck onto the stage during Sony’s conference.  Long-time fans of the series had been nearly driven insane wondering when, if, Sony would return to one of its oldest franchises.  The wait was long, but it did have an end, unfortunately it wasn’t really worth the effort.

Twisted Metal is not a bad game in the strictest sense.  Visually it’s quite nice to look at though not breath-taking.  The textures on the scenery are minimalist but that’s because the game was built for speed and there’s little need for gorgeous textures when the player is going to spend the majority of the game zipping around the various levels.  The cars look great, though from an artistic standpoint they do seem to lack in personality when compared with the older games.  Perhaps that’s nostalgia getting the best of me and an over-compensation on my part considering the drivers are no longer unique (more on that to come), but it is the impression that I get.  The soundtrack features a mix of original compositions that mostly trend towards hard rock and some licensed tracks featuring a return of Rob Zombie (which is actually kind of odd, considering he was only featured on the much-maligned third and fourth entries in the series).  It’s been quite a long time since I’ve driven around a war zone with “Dragula” booming through my television speakers.

The game mechanics of Twisted Metal remain largely unchanged as well.  You still drive around blasting opponents with fire, power, homing, and all sorts of other missiles all the while relying on powered-up special attacks.  A lot of the vehicles have a familiar feel as well.  Sweet Tooth (the truck, not the character) still handles like a bath tub on wheels and Dark Side has a punishing ram attack.  Some vehicles return with new special attacks this time out, such as Roadkill’s mini gun and Junkyard Dog’s Taxi.  This one even includes a helicopter for the player to try out, something that was to be included in Black but had to scrapped at the eleventh hour. 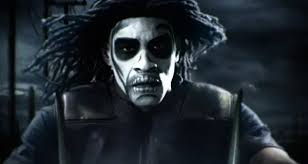 If a lot of the game is more of the same, why am I threatening a negative review?  Well, a lot of reasons really.  While the gameplay is fairly consistent with prior games, there’s a different feel to the physics this time out.  It’s as if the development team decided the more chaotic the battles, the better.  Now it seems like only the slightest bump or the most insignificant weapon can send your vehicle bouncing around like a tennis ball.  This causes vehicles to get hung-up on walls and proves especially annoying during the games racing levels.  You read that correctly, there are racing levels this time around and they are atrocious.  Twisted Metal was never designed to be a racing game and that is more than evident when it tries to be one.  The levels are still wide open but force you to travel through gates or checkpoints along the course.  The thing is, there is no set course so the whole thing becomes an exercise of trial and error as you try to figure out which way the game wants you to drive.  The final race is particularly annoying as it has you speed over ramps and rooftops where one error spells doom.  And passing through all of the checkpoints first is something only required of you, the player, the AI controlled opponents are free from that restriction.  This is a pretty big deal for the final race because finishing in first is meaningless, it just reveals on your map where the final, mobile, checkpoint is.  Activating this final checkpoint causes all of the other cars to explode, which means if one of the AI cars activates it first, you lose.  And since they don’t have to pass through all of the checkpoints it really becomes a crap shoot.  If there’s one silver lining for the racing levels it’s that there are only three, but you’re likely going to hate all of them.

And that wasn’t the only way the team “spiced” things up with the single player, there’s also electric cage and endurance matches.  Electric cage match sounds pretty cool, but it’s not.  Again, it just turns into another gameplay tweak that’s annoying, not enjoyable.  In these levels a laser cage surrounds an area for a set amount of time.  While inside it, you’re fine but leave it and a timer is activated.  Once that timer reaches zero you begin to take damage.  Every minute or so, the cage vanishes and reappears at another part of the level setting off a mad dash to find it.  One of these levels occurs in an amusement park and the serpentine like roads make it a challenge to find the damn thing once it re-spawns.  It just doesn’t add anything enjoyable to the experience.  The endurance rounds are actually okay.  These require the player to kill a certain amount of enemies while keeping a large number of them on the map throughout.  This creates a more chaotic experience that actually works.  I still prefer the more traditional levels, but this one’s okay. 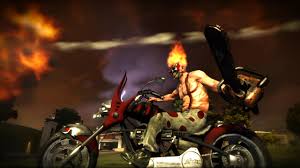 Since the game only has three characters, each one can drive whatever vehicle he or she chooses.

Then there’s the Juggernaut levels.  The Juggernaut is a semi with a full trailer armed to the teeth.  It also spawns a new enemy every thirty seconds.  In these levels you have to kill the Juggernaut as well as all other combatants.  Later levels introduce a second Juggernaut and a more powerful version at that.  These levels are okay and do prove challenging and serve as a sort-of mid-point boss fight for the three single player scenarios.  The true boss battles comprise their own level, though usually play out in stages.  The first one was pretty cool and pits the player against two over-sized monster trucks. The second, a battle against a mech-like enemy, was annoying.  Part of the reason for its annoyance is the inclusion of the dreaded electric cage for a portion.  The final boss, a Sweet Tooth themed one, is much better.  It’s both over-the-top and inventive and a good way to close out the third and final story.

And yes, that is also correct, there are only three single player stories.  This has been known for awhile and dreaded by me.  My hope was that since only three existed they would be more involved and longer than before.  Instead, they’re shorter than what was in Black and can be completed in less than an hour a piece.  They kind of form one long story and have to be played in succession from Sweet Tooth, to Mr. Grimm, and to Dollface.  Sweet Tooth is pretty much the same Sweet Tooth from Black.  In his scenario we get to see the origins of this Sweet Tooth and what he hopes to get from Calypso when he wins.  The story unfolds in three parts, an intro movie, a middle, and an end.  These are done with live actors instead of CGi.  It’s actually not bad, and Sweet Tooth’s story, while predictable, was entertaining.  Grimm’s was less so, and Dollface’s more like Grimm’s.  There are a couple of ending movies that serve as epilogues that bring the focus back to Sweet Tooth, which proves to be a good thing.  This game’s Calypso is also very different from previous ones.  He kind of looks like Jack Black from The White Stripes and is some sort of entrepreneur and has his own company.  He still bestows wishes on the victors but I found him less entertaining this time around.  The twists were all very predictable and thus less amusing.

Twisted Metal places emphasis on online play. Here is a shot from the game's Nuke Mode which has each team fire missiles at the other team's colossal idol.

The single-player was a tack-on thing and definitely feels that way.  It’s a shame, because I loved playing through each one in Black.  Sure the writing wasn’t anything fantastic in that game but it was entertaining.  This game’s primary focus is on multi-player, something I rarely engage in.  I’ve never touched the online component of most of my games including Red Dead Redemption, Uncharted 2, Mortal Kombat, Smackdown vs Raw, and so on.  Because this one includes such a small amount of content, I’ll pretty much have to give it a shot.  It could be good, but right now the servers are all messed up leading to numerous network connection errors.  This appears to be a wide-spread issue and a patch is set for release next week.  Online is still playable for the truly determined, I’m just not among them.

I suppose that makes this verdict incomplete, but in truth, no amount of multi-player action can change my mind at this point.  Online matches may help alleviate the notion that I just wasted sixty bucks but it won’t change the fact that, as a single player game, Twisted Metal isn’t very good.  There’s not much content and the gameplay engine just isn’t up to par with past efforts.  I looked forward to the return of this franchise more than any other and I’m really disappointed it could not meet my expectations.  Now, if you’ll excuse me, I’m gonna go fire up Twisted Metal Black and try to recapture those glory days long since passed.

This entry was posted on Sunday, February 19th, 2012 at 6:15 pm and tagged with david jaffe, dollface, mr. grimm, playstation, playstation network, sweet tooth, twisted metal black and posted in Video Games. You can follow any responses to this entry through the RSS 2.0 feed.
« Danzig: Circle of Snakes
Danzig: Thrall-Demonsweatlive + »