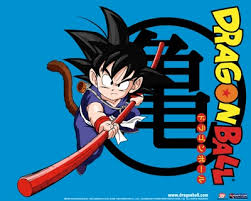 This past summer amazon.com had a big anime DVD sale that proved quite tempting.  I’ve never been big into anime, but there’s been some I’ve enjoyed over the years.  Namely, Cowboy Bebop, which I count among my favorite television series of all time.  That wasn’t my first love though, no, that belonged to Dragon Ball Z.

Dragon Ball Z had a funny romance with American audiences.  It was first brought over in the 90’s, and in my area, aired on weekday mornings.  I never payed much attention and apparently I wasn’t the only one as the show died a quick death.  Cartoon Network would later acquire the broadcast rights for its weekday afternoon blocks.  These programming blocks were aimed at a more teenage audience and usually included action cartoons.  Eventually, this block would be re-named “Toonami” and DBZ would become the centerpiece for several years.

I consumed quite a bit when it came to DBZ.  Because dubbing the program proved to be time-consuming, my friends and I often couldn’t wait for the new episodes to hit television and we would instead purchase the VHS tapes as they came out.  I think each tape cost around 20 bucks and contained just 3 episodes a piece.  This was not a cost-conscious way to view the show, but it was all we knew.  Despite this annoyance, I stuck with it through to the end.  I still have a ton of VHS tapes of this show hanging around my basement, probably never to be watched again.

Goku just found out Chi Chi is a girl...

Eventually I grew out of DBZ.  While at first viewing it proved exciting, it would eventually ware off.  The action pieces were cool and flashy, the Z warriors possessed some very imaginative abilities that separated them from standard American super heroes.  The plot lines proved extremely shallow though, and despite the flashy moves the show moved at a snail’s pace.  The heroes love to stand around and all comment individually on how a fight is progressing.  They constantly turn to the same tricks over and over and over again (villain gets hit with a giant blast that fills the area with smoke, everyone thinks the villain is dead, then the smoke clears, mouths hang open) to create suspense but after awhile it proves extremely tiresome.  That’s not to say I don’t still have a soft spot for DBZ, but it’s nothing I consider brilliant.

Dragon Ball, on the other hand, that I can get into.  Dragon Ball is what came before Dragon Ball Z.  It never caught on in America, and only after the success of DBZ did the production company Funimation decide to dub the entire series.  These cartoons would make it onto Cartoon Network as well and I saw most of what would be considered the first season, but real life interfered for me and I never kept up with it.  Plus on television the show had to be heavily edited.  Where DBZ went for over the top action, DB opted for humor and mostly of the perverted sort.  A reoccurring gag of the first season involves our ignorant child hero Goku, the main protagonist for both DB and DBZ,  patting every new person he meets on the crotch to figure out who’s male and who’s female.

Dragon Ball is also less concerned with the next great challenge for Goku and more interested in adventure.  Goku’s abilities are very super-human but not to the degree they will become when he’s an adult in DBZ.  In DB he’s a happy-go-lucky kid who’s been sheltered his whole life.  He’s out of place in the world, but he’s not all that concerned about it.  He’d rather focus on getting stronger and finding his next meal.  That would make for a pretty lousy tale if he wasn’t constantly running into people who needed his help. 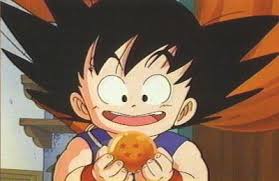 Goku with his "grandpa."

The series starts off with Goku meeting Bulma, a teenaged girl out searching for the mystical dragon balls.  Once all 7 are collected, the eternal dragon will show himself and grant a wish to whoever summoned him.  Bulma wants a boyfriend, apparently she’s had no luck finding one herself, but standing in the way is Goku who happens to possess the 4-star dragon ball.  Goku is a young boy who lives out in the woods by himself.  He refers to the dragon ball as his grandpa, and we later learn that Goku used to live with his grandpa until a giant monster stepped on him.  The way Bulma and Goku meet is rather unorthodox, she hits him with her car.  The fact that Goku is still standing intrigues her and she decides to bring him along on her adventure.  He proves nearly indestructible and has a monster appetite.  If that wasn’t unusual enough, he also has a tail.

From here the two travel together in search of the dragon balls via Bulma’s Dragon Radar.  This takes them to various interesting locales where Goku rights wrongs and Bulma finds dragon balls.  We meet the shape-shifting pig Oolong, the desert bandit Yamcha, and the martial arts expert Master Roshi.  Roshi proves to be the character who consistently steals every scene he’s in thanks to his wildly perverted nature.  He just never stops and when our heroes first meet him he agrees to help them only if Bulma will show him her panties.

Bulma isn’t the only one looking for the dragon balls though, the feisty Emperor Pilaf and his goons are as well.  We never really learn just what Pilaf is an emperor of, perhaps he is only in his mind, but he seeks world domination and views the dragon balls as a means to an end.  Pilaf and his cronies are typical incompetent villains.  Goku and his friends are constantly thwarting him.  He’s so inept that Goku often overlooks him and completely forgets about him in later seasons when their paths cross again. 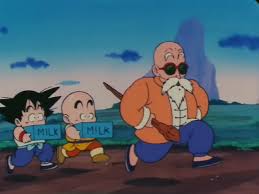 Krillin and Goku get a taste of Master Roshi's unorthodox training methods.

That’s how the first part of season one goes, the second part focuses on Goku training under Master Roshi along with another pupil, the monk Krillin.  Krillin, like Goku, is a young boy with exceptional talent.  He’s not quite as strong as Goku, but makes up for his physical short-comings with brains, something Goku has in short supply.  He takes advantage of the naive Goku to keep up with him during their training under Roshi.  What could have been excrutiatingly boring turns out to be pretty fun as we watch the two compete and train with one another leading up to the World Martial Arts Tournament.

The World Martial Arts Tournament is the climax for season one, where both Goku and Krillin test their skills against the best fighters in the world.  Master Roshi, not wanting his students to win to teach them humility, enters the tournament poorly disguised as Jackie Chun but it seems to fool the kids.  The fights at the tournament feature a nice balance of slapstick and action.  It is perhaps not as fun as the more adventure themed episodes, but they prove rewarding in the end.  Ultimately, season one of Dragon Ball captures everything I love about the series.  There’s tons of genuine laughs, plenty of adventure, and a healthy dose of action.  The plot isn’t entirely immersive, but what it lacks in depth it makes up for in charm.  This is just a really charming show and it’s easy to fall in love with most of the characters.  Dragon Ball Z did some of these things as well, but not on this level.  It’s a bit unfortunate that the sequel overshadows the original, because Dragon Ball is miles ahead of its Z counterpart.

This entry started me mentioning amazon.com had a big anime sale.  Well, that sale proved to be the catalyst to finally get me to see the entire Dragon Ball series.  I bought all five seasons and over the last few months I’ve watched every episode.  I plan on reviewing each entry so if you want to read more about Dragon Ball make sure to check back.

This entry was posted on Saturday, December 10th, 2011 at 9:39 pm and posted in Television. You can follow any responses to this entry through the RSS 2.0 feed.
« Super Mario 3D Land
Danzig 6:66 Satan’s Child »