September of 1997 brought with it the final episode of X-Men, the animated series that first began airing on Fox Saturday mornings on Halloween of 1992.  Shows aimed primarily at kids often last only a season or two, but X-Men made it for 5 years and 76 episodes and to this day is still the longest running television show based off a Marvel Comics property.  While the show wasn’t able to maintain the momentum it generated in the first two seasons, it was largely a quality program for its entire run.  Here, in September of 2011, my series overview will come to an end with the final 4 episodes.  It was a lot of fun reliving my favorite show as a kid and if you wish to do so as well all of the episodes are available on DVD.  The DVD’s themselves are fairly unspectacular but all of the episodes are there and that’s what matters most.  I’ll probably make one more post on this subject to serve as a wrap-up, but this ends the individual episode examinations. 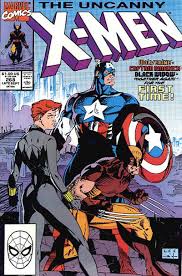 Uncanny X-Men #268 probably served as inspiration for this episode.

Now here’s an interesting idea for an episode of X-Men that also gives us a cameo from a classic Marvel character and further adds to the Wolverine mythos.  “Old Soldiers” is a flashback episode triggered when Wolverine visits the grave of someone who must have been important to him at some point in his life, but we’re kept in the dark for now.  The flashback details an outing Wolverine had during World War II where he was joined by none other than Captain America.  Wolverine and Cap are sent to rescue a scientist from the dreaded Red Skull.  We get to see the two break into the compound, confront the Skull and his goons, and escape in a thrilling fashion.

Captain America is depicted well and the writers give him some personality so he’s not some stale Superman clone.  They even go so far as to have Wolverine make fun of him for wearing his ridiculous costume but Cap has a good response illustrating that he’s more than a soldier, he’s a symbol.  The Nazi stuff is predictably toned down but not hidden entirely, which is nice.  Wolverine doesn’t yet have his claws, but the writers give him some slide-on ones that were supposed to help him and Cap scale a wall.  It’s kind of a cop-out and I wish they hadn’t bothered, plus they don’t look like they’d be very helpful for wall climbing.

Cap and Red Skull; it wouldn't have bothered me to see more of them.

There’s a nice little twist ending as well, that I won’t spoil here.  This episode was probably inspired by Uncanny X-Men #268, though sadly, they weren’t able to work Black Widow into the story.  The animation works pretty well, though I do dislike how wild Wolverine’s hair looks in the present time portion of the episode.  All in all, a cool one-shot and sadly the last of the Wolverine episodes.  As overexposed as Wolverine is, his solo episodes are very good and rarely disappoint.

This episode contains another first-time cameo, this time it’s the mutant Cannonball from both the New Mutants and X-Force.  Unfortunately, it’s one of the least memorable. 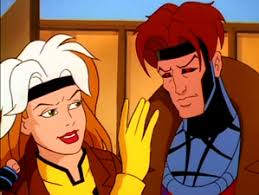 Rogue travels to the south to meet a young coal miner who was recently exposed as a mutant to his small town.  Rogue presents herself as a teacher (borrowing Gambit’s last name) in an attempt to reach out to the young Sam Guthrie.  Surprisingly, Sam does not encounter much hostility from the locals but soon some government agents show up and start meddling around.  The resulting scenes are so predictable they’re dull, and in the end Sam ends up staying right where he is.

The episode is notable for the debut of Gambit’s new voice actor, whom I don’t particularly care for too much.  I also don’t like how Rogue looks with this new animation style as she seems to have more of a toon quality than most.  It proves distracting and undermines the episode’s serious plot.

Here’s an interesting episode I never thought we’d see, and perhaps the best of season 5.  “Descent” is another flashback episode though we’re not really certain who’s flashback it is until its close.  It takes place in old London and focuses on two characters, Dr. James Xavier and Dr. Nathaniel Essex. 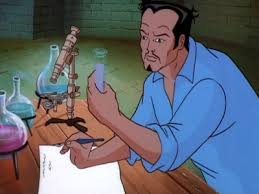 Dr. Essex is brewing something sinister.

Obviously, Xavier is a descendent of the Charles Xavier we know.  Comic book readers will know who Essex is through name, but most television only viewers will easily figure out that he’s in some way related to the villain Mr. Sinister.  Xavier and Essex are rivals who both approach the work of Charles Darwin differently.  Xavier believes genetic mutation is random while Essex believes it can be influenced by science.  Essex takes the same view that Magneto will, which is that mutated humans are the next step in human evolution and thus destined to be superior.

The episode appropriately illustrates the descent of Nathaniel Essex from public ridicule to outright scorn.  Essex is soon discovered to be experimenting on his own wife and a mob is organized to confront him and chase him out of town.  This basically forces Essex to begin experimenting on himself which ultimately leads to the birth of Sinister.

This is just a bad ass picture of a Victorian Sinister, one that needed inclusion in this post.

This episode is just a great character study and gives the audience insight into how Sinister’s philosophies were born.  Seeing Sinister get rejected by Darwin is also a fun visual and giving a more personal rivalry to the Sinister/Xavier conflict is also welcome, as before this episode the two characters really didn’t encounter one another much.  I suspect for kid viewers this one may have been a little dull but I consider it one of the most underrated episodes for the series.  A true hidden gem.

And here we are, the final episode.  Unlike most shows, X-Men gets a proper series finale and does provide some sense of closure.

The basic plot of the episode reintroduces the conflict that got it all started; mutants and humans, Magneto and Xavier.  Old pal Henry Gyrich returns at the beginning (minus his trademark glasses and with a new hair color) as a speaker at a hearing on mutant rights and he springs an attack on an ill Charles Xavier that outs Xavier as a mutant (I never knew the public was kept in the dark this whole time, I suspect I’m not the only one).  The resulting attack combined with Xavier’s health lands Charles on his death bed.  The general mutant population is outraged, and war seems inevitable.

Jean finally gets to rock the yellow and blue.

The X-Men are left to deal with the resulting upswing in conflict, while Magneto lurks on the periphery.  Morph gets to make a return and poses as Xavier on television (the animation for his morphing power is terrible, by the way) in an attempt to quiet the masses.  Meanwhile, Cyclops, Jean, and Wolverine head off to find Magneto and hope to quiet his rebellion.  Mutants have amassed around some cave Magneto is apparently living in, lead by Sunfire.  They are patiently awaiting direction from their leader who has yet to show himself.  The X-Men sneak in a rear entrance they uncover and confront Magneto after he destroys the blackbird.  Magneto, foolishly believing the X-Men were that easy to take out, is taken unawares but soon gains the upper hand.  When Jean springs the news on him that Xavier is dying he is stunned, and thus begins his monologue.  Magneto is understandably torn.  He loves Xavier as a brother despite their rivalry, and yet now is his chance to realize his own dream.  Suddenly, Jean realizes Magneto could help save Charles, and Magneto reluctantly agrees to accompany them back to the mansion.

Magneto’s powers somehow are able to amplify Xavier’s and he is able to awaken momentarily.  This grants us a final scene where Charles is able to go around the room and individually acknowledge and say goodbye to each member of the X-Men from his bed, including Morph and Magneto.  Some of it is genuinely touching, particularly his good bye to Cyclops, but once complete it looks like Xavier’s time is up.  Then out of no where, Lilandra teleports in and slaps some device on Xavier’s forehead.  She lets the X-Men know that the technology of the Shi’Ar can save their beloved professor, but in order to do so she must take him away and is unsure if he’ll ever be able to return.  Thus the episode comes to a close with Xavier imparting words of encouragement telepathically.  As the screen fades we’re left with a final group shot and many questions.  Is Morph finally back on the team?  Is this what is needed to get Magneto to finally marry himself to Xavier’s cause?

Obviously, these questions are never to be answered as the show is brought to a nice conclusion.  If I have one complaint about this episode it’s that the pacing is off.  Everything moves far too quickly due to time constraints.  I would propose that this episode should have at least been a two-parter, if not more, with Magneto’s army being bigger and more impressive.  It also could have served to get more cameos into the mix as mutants are forced to choose sides.  The lesser episodes of season 5 could have been scrapped to accommodate this, but sadly the writers didn’t have the foresight to do this.

Nonetheless, “Graduation Day” is a fitting farewell to our mutant heroes and one that is all too bittersweet.  Some of the more narrative heavy episodes of season 5 and the renewed human-mutant conflict of the final episode illustrate that this show still had legs, if placed in the proper hands.  Still, it was a good run and a faithful portrayal of the X-Men that has been equaled by no other movie or television series since. 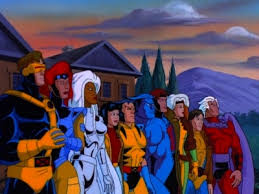 So long X-Men, and thanks for the memories.

This entry was posted on Saturday, September 17th, 2011 at 2:10 pm and posted in Comics, Television. You can follow any responses to this entry through the RSS 2.0 feed.
« Edguy – Age of the Joker
Opeth – Heritage »