Season 5 was never meant to be.  The creative staff for X-Men felt the writing was on the wall and the series would not be renewed after season 4’s completion, so the four-part “Beyond Good and Evil” was meant to give the series a truly memorable farewell.  Unexpectedly, Fox decided to order more episodes, and while I’m sure the people who worked on the show were delighted, this did pose some problems.  AKOM, the studio that handled the animation for almost all of the episodes, would not be able to fulfill the order placed by Fox, and thus episode 70 (“Storm Front Part 2”) would be their last episode for the series.  Philippine Animation would handle the final six remaining episodes and do so with a distinctly different style.  The animation is probably an improvement over much of AKOM’s work as it’s more fluid, but the style is more of a toon quality.  In some ways, it resembles the artwork being put out by Marvel during the Onslaught Saga but with far less detail.  I personally am not too fond of the look, but one bonus was getting Jean depicted in her actual comic book attire yellow and blue.

The lack of planning for a fifth season also shows in the writing quality.  Outside of the first two story arches, most of the episodes are stand-alone but do tie into some older plot threads.  The season does have a feel to it of the writers taking chances or just exploring aspects of the series that interested them such as the Sinister origin story and the Wolverine/Captain America team-up.  As such, some of the episodes are interesting and some miss the mark.  There’s probably more of a “love it hate it” opinion for the following episodes more than ones prior, but there are a couple of hidden gems.

The Phalanx Covenant (Parts 1 and 2) 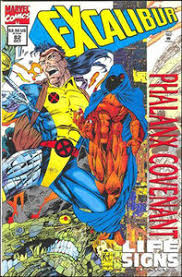 "The Phalanx Covenant" was a major story-line in the comics that spanned all of the 'X' books.

Probably the only tie-in episodes of season 5 that tied in with the current comic book plot-line, though in a much truncated form.  “The Phalanx Covenant” introduces the Phalanx organism to the animated universe.  It begins innocently enough with the X-Men capturing a rampaging Sabretooth (old animation was mined from the very first episode of X-Men for parts of this, perhaps illustrating the time constraints this season was placed under) and bringing him back to the mansion.  In a piece of deja vu, Wolverine can’t help himself and seals himself away in Sabretooth’s cell for some fun, and because he senses something different about his old foe.

Wolverine and the rest of the X-Men soon learn that Sabretooth is possessed by some sort of techno-organic life-form that soon corrupts the entire mansion.  Only Beast is able to escape as he makes buddies with a piece of this alien known as Warlock.  Warlock explains to Beast that he is part of the Phalanx, a life-form that exists as part organic and part computer.  A virus has infiltrated the global conscience that links all of the Phalanx together and has corrupted it.  Warlock has separated himself but he is the only one, and his life-mate was not so lucky. 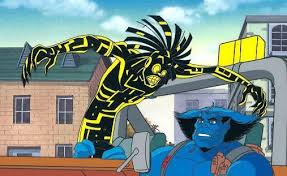 Warlock and Beast make for an interesting duo.

Warlock, as some of you are probably aware, is an old comic book character from the New Mutants books where he was an ally of the X-Men’s youngest division.  His portrayal here is pretty faithful, as he and Beast find themselves on the run and in search of any aid they can find.  This two-parter ends up playing out as a fun little team-up and cameo-fest.  X-Factor makes a brief appearance as Beast seeks out the aid of Forge while a distress call from Mr. Sinister brings our heroes an unlikely ally.  The final piece of the puzzle is the master of magnetism himself, Magneto (with original voice actor and a cool beard!), who reluctantly leaves his Antarctic fortress where he apparently has been brooding since his most recent failure.  Magneto would love to watch the fall of humanity, but since his son Quicksilver needs saving he gets off his high-horse and helps out.

They find Magneto’s force field very effective, and assault the citadel created by the Phalanx to serve as their nexus.  There they find the leader of this attack, Cameron Hodge (remember him?!), and the captured members of X-Men and X-Factor.  With their combined effort, the Phalanx and is thwarted and Warlock is reunited with his life-mate.  A fairly fun plot is concluded, one that placed the after-thought Beast in a leading role for a change, and included some unlikely allies.  Sadly, this is the last good multi-episode plot for the series. 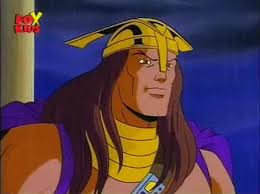 Arkon, and his stupid hat.

This would be last two-part storyline for the show, and it’s a dud.  As I mentioned in the lead in, I suspect the writers wanted to take the opportunity afforded by a fifth season to look at some forgotten or untouched upon aspects of the show.  Storm would represent just that.  Pretty much ever since the conclusion of season 2, Storm has been a minor character.  If I took the time to tally her appearances it wouldn’t shock me if I found her to be the most under-represented member of the X-Men for seasons 3 and 4.  Unfortunately for her, I suspect that might be because her episodes were among the least interesting.  Outside of “One Man’s Worth,” the episodes featuring her as a major player include “Whatever It Takes” and the two-part “Savage Land, Savage/Strange Heart.”

“Storm Front” does nothing to change that.  In this two-parter, Storm encounters a strange visitor from another world who claims he came seeking Storm’s help.  His name is Arkon and his world is plagued by a relentless storm and he needs the help of someone like Storm to put a stop to it.  Storm agrees and leaves a token behind for the X-Men to find.  Soon Wolverine, Cyclops, Beast, and Jubilee are in pursuit and find themselves on Arkon’s strange world.  Storm is successful in quieting the skies, and in a moment of revelry Arkon asks her to rule this world at by his side.  Storm agrees, much to the shock of the other X-Men.

Before long they realize that Arkon is a ruthless dictator.  His country still uses slaves and it’s up to the members of the X-Men on his world to clue Storm in.  Of course, she refuses to believe it at first but eventually comes around.  There’s a big confrontation, Arkon gets emasculated, and the X-Men return home after seemingly freeing the slaves on Arkon’s world.  Storm goes into hiding until the final episode of the series (not literally, of course) and thus, AKOM’s work is finished.

Our introduction to what the series will look like for the remainder of its days comes to us in the form of “The Fifth Horseman.”  This episode stars Beast and Jubilee on a field trip of sorts to South America.  Already the new visual style is pretty striking as beast is less furry looking and Jubilee finally looks Chinese, how about that?

I neglected to mention in the write-up that Beast gets transformed in this episode and looks pretty crazy.

The episode is a bit bland, but it does tie into some older ones.  Jubilee soon finds herself the target of a group of mutants who want to kidnap her for some purpose.  One of the mutants is a mutated Caliban, a former morlock.  Jubilee acts like she knows him, even though I’m fairly certain Caliban was never shown in any previous episodes but the writers try to trick the audience into thinking we know who this guys is.  It is soon revealed that Caliban and his cronies are working for some crazed cult leader trying to resurrect a god.  That cult leader turns out to be Fabian Cortez, last seen floating through space on a ship piloted by Apocalypse.  That god he wants to resurrect?  You guessed it, Apocalypse!

Apocalypse was last seen being banished by the world’s telepaths to the Astral Plane, where he supposedly would remain for all eternity.  Apparently they lied, as there is a way for Apocalypse to escape, he just needs a host body and hence why Cortez wants Jubilee.  Like most villains, he underestimates his foes (and allies) as Beast is able to crash the party and even lure Caliban back over to the side of good (though in doing so he loses his cool new powers).  At the episode’s conclusion, Apocalypse frees himself from the Astral Plane by taking over the body of Cortez.  Like Jean, Apocalypse finally gets depicted in his comic accurate colors of black and blue (instead of that hideous pink and blue scheme AKOM had went with).  Unfortunately, the writers never get to explore Apocalypse further and this remains as his final appearance.  It at least ties in with that discussion Cable and Apocalypse (and later Beast) had regarding good vs evil, as evil can never truly be destroyed.

What’s worse than a Storm episode?  A Jubilee one.  Well, perhaps that isn’t entirely true as “Night of the Sentinels” could be considered a Jubilee episode and that two-parter is among the best for the series.  This one though is among the worst.  I’ve thrown out candidates along the way for worst episode of the series, and this one just might be it.  It’s definitely top 3, at the very least.

For those curious about what Wolverine would look like as a troll, you get your wish.

The plot for this episode is borrowed from a comic book story, only replace Jubilee with Kitty Pryde and change out some of the X-Men.  Jubilee is leading a group of students on a tour of the caverns under the mansion when a cave in occurs.  In order to keep the students occupied and their minds unaware of the danger they’re in, Jubilee spins a tale of medieval fantasy that places her in the starring role.  Several X-Men make cameos in her story including Wolverine as a troll and Magneto as the ultimate villain.  I suppose some might find it cute or think it’s unique approach to story-telling is refreshing, but I find it boring and stupid.  The portrayals of the X-Men in fantasy attire is only amusing for so long and just can’t sustain an entire episode.  That and since Jubilee is supposed to be making the story up as she goes, the plot is forced to be rather simple and relies on fantasy clichés.  One note worth mentioning, this episode marks the debut for Gambit’s new voice actor, Tony Daniels.  While he certainly sounds the part of a scoundrel, it’s no comparison with the original VA, Chris Potter, and a clear down-grade.