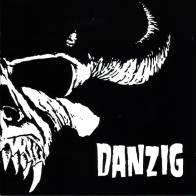 If I’m going to make an entry for every Danzig release it makes sense to start with the debut self-titled album from 1988.  I’ve already written about the series of events that led to the formation of Danzig in the late 80’s and how the band ended up on the Def American label.   To re-hash quickly:  Rick Rubin wanted to sign metal bands, liked Samhain, gave Glenn Danzig a four album deal.  Simple enough.

The first record was recorded in 1987 and released in 1988.  The demon skull that had been the logo for Samhain was carried over as the logo for Danzig.  The cover of the record, and the approach, is simple and straight-forward; all black with the skull featured prominently across the front and back cover.

This is the album Rick Rubin allegedly had the most influence over.  This makes sense considering the band was a new property for the label and getting off to a good start would go a long way towards securing future success.  Rubin is famous for his stripped-down, no frills approach when taking on rock and metal acts.  He is reportedly a big fan of AC/DC and that was what he wanted to do with Danzig.  He wanted the guitars to be a feature point and the drums to contain minimal fills.  The vocals would be up front and feature little studio polish.  The bass was kind of left behind, either because Rubin didn’t feel it was essential or didn’t care for bassist Eerie Von’s playing.

John Christ was called upon a lot to set the stage for most of the tracks.  His guitar playing is at times stiff but the edge with which he plays compliments the tracks here.  His play is often aggressive and the solos are varied.  This is really his debut record as a guitar player and he makes a good impression.  Chuck Biscuits is kind of held back a little and would offer some stand-out performances on future releases, but what’s here is solid.  He does have a few standout moments, particularly on “Am I Demon,” and overall accomplishes what Rubin intended.  Danzig’s vocals are clear, though a bit under-stated for him.  He only has a few opportunities to really belt out a chorus and the vocals aren’t as high in the mix as one would expect given he is the focal point of the act.  Kind of like with Biscuits, Glenn would have better performances in the future but what is here is good, but not mind-blowing.

That good but not great line is an easy way to summarize the album as a whole.  The album includes some now classic tracks but there’s an air of restraint about the whole thing, which is odd considering how intense previous Glenn Danzig albums had been.  “Twist of Cain” is the opener, and is now a long-time crowd pleaser.  It’s a meandering hard rock number with a lot of metal cliches in the lyrics.  It’s mid-tempo, like most of the tracks on this album, and while I love the song I’ve always felt the drums lacked punch.  Particularly the opening.  The riff would become the standard Danzig riff.  Variations on it will appear all through-out future albums, but none ever top the original.  Songs like “Not of This World” and “Am I Demon” bring a little more speed to the table and when played live would often be sped-up even further.  Again, there’s an energy in these tracks but it feels like the band is holding back. 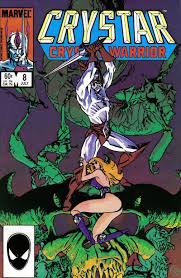 The Danzig logo was allegedly lifted from the cover of an obscure comic by Marvel called Crystar: Crystal Warrior, though Glenn insists to this day that he designed the logo. Here’s the cover, you decide.

The songs that were never intended to be fast numbers work the best under this approach.  “Soul on Fire” is probably the most complex song on the album, and quite possibly the best.  It settles into a nice groove and Glenn gets his croon going for the verse.  The chorus has a nice drum pattern, and if you listen closely you’ll notice a saxophone (or something sounding like a sax) buried under the mix which is pretty unique for a Danzig record.  The outro throws in some faster riffing and adds nice variety to the song.  “She Rides” is a slow brooder.  Really cheesy, but really effective.  I hear it used to be popular at strip clubs, which isn’t surprising.  The album’s closer “Evil Thing” is one of the few tracks that doesn’t feel like it’s being held back by anything.  Danzig’s wails sometime degenerate into snarls and the drums bring a great ferocity to the tempo.  It’s a track with more personality than most.  The future hit “Mother” also appears on this album, but one can see why it wasn’t a hit initially since it kind of just exists on this record as almost filler.  I should note for any Metallica fans out there, that James Hetfield has an uncredited role on back-up vocals on “Twist of Cain” and “Possession.”

The first Danzig album is a solid but under-stated debut for the new band.  So much so that one questions why producer Rick Rubin would opt for such an approach when something bolder might have worked better.  This album did come out during MTV’s highly influential peak and the band wasn’t able to produce a video that fit their criteria, which likely harmed sales.  Had the video for “Mother” been in-line with their standards perhaps it takes off in 1988 as opposed to 1993.  That’s not a criticism of the band though, as the band should conduct itself however it wishes and caving to corporate pressure isn’t very “metal.”  Missteps aside, this is a good album and an essential piece for any Danzig fan, there’s just better stuff ahead.