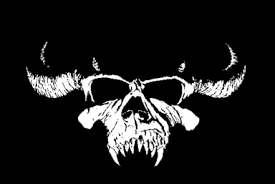 By now, it should be obvious that a post on this blog  titled “Danzig” is not going to be about the former port city in Poland.  Danzig is my favorite band and I make no attempt to hide that simple fact.  I could try to explain why I love Danzig so much but I’m sure I would find it difficult to adequately convey what it is I so admire about the man/band.  I’ll keep it simple and say I’m drawn to the rebellious nature of the music and Glenn Danzig’s infectious croons.  It doesn’t bother me that Danzig isn’t more beloved by music fans, though I steadfastly believe there’s a Danzig song out there for everyone.  I take pride in my extensive knowledge of all things Danzig so I thought it would be fitting to add to this blog a one-stop Danzig information center.  And by that I don’t mean stats on Glenn Danzig’s height or witty posts about piles of bricks in front of his house, I’m strictly talking about the music.  What are the albums worth checking out?  The best songs, lineups, and so forth?  Those are the questions I want to answer.

I will throw in some background information since this is the lead-in post.  Danzig is a band, but it’s Glenn Danzig’s band.  He writes all of the music and calls the shots.  Glenn grew up in Lodi, New Jersey and first began making a name for himself with the horror punk group The Misfits which got its start in the late 1970’s.  The Misfits were first conceived as a pretty straight-forward American punk band, but would later adopt the horror gimmick which gave the band a marketable identity.  The Misfits weren’t around for very long but made a lasting impression.  Unfortunately for those in the band, a lot of the success came well after the band’s demise in 1983 but the band’s influence can be felt all over the punk and metal genre.

Glenn’s next band was Samhain.  I already made an entry on Samhain so I won’t say too much about that band here.  Simply put, Samhain was a darker take on The Misfits with more influences from goth and metal.  Glenn wanted to do something a bit more serious while still keeping some of that horror camp The Misfits were known for.  Samhain was also short lived, for it was as Samhain that Glenn and the boys garnered the attention of record producer Rick Rubin who would sign the band in 1987 to his newly created Def American label.  It was at that time the band would be re-titled Danzig. 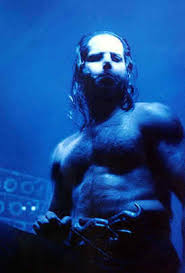 The Misfits and Samhain were both plagued by lineup changes throughout their existance.  Initially, Danzig was conceived as a super group with Glenn as the focal point.  The label would bring in difference musicians to play with Glenn to keep things fresh.  The initial lineup wasn’t full of names, but it had talent.  Eerie Von was the lone holdover from Samhain on bass, largely because he and Glenn were good friends.  Von wasn’t a gifted bass player, but bass was never a part of the production Rubin focused on so he put up little fight in letting Glenn retain Eerie.  Rubin brought in veteran drummer Chuck Biscuits to play on the first record.  Biscuits is a goofy guy with an even goofier name but one Hell of a drummer.  He was good enough that both Glenn and Rick saw no reason to make any changes for the following records, there was no point.  The ever persistent John Christ was hired to play guitar after auditioning numerous times to be in Samhain and Danzig.  I’m not sure what won him the job, perhaps it was a lack of options, but Christ’s style would fit the band’s early sound quite well.  What probably was supposed to be a one record deal ended up lasting for the duration of the band’s contract with American Recordings.

The first Danzig record was released in 1988.  Produced by Rubin, it featured a stripped-down sound with Rubin emphasizing on capturing the band’s live sound in studio.  He would force the band to get their parts recorded in one take and there was very little post-production and mastering.  The album was not a hit, and even though it would contain the track “Mother” the song wouldn’t garner much airplay initially.  Part of that was due to the Satanic imagery of the song’s video, making MTV wary of playing it without some censorship put in place.  It was this image that would also lead to the parent label, Geffen Records, from ever having it’s name or logo featured on a Danzig record despite being the distributor.  All of this mystique seemed to amuse Glenn and probably ended up helping create a dangerous image that attracted a younger audience.

Because the band was not an overnight success, Rubin would lose some interest and devote less time to producing the follow-up records.  The band’s second album, Lucifuge, would follow in 1990 and Danzig III: How the Gods Kill in ’92.  By now the band had gained a strong underground following, culminating in a sold-out Halloween show at Irvine Meadows during the How the Gods Kill tour.  Four tracks from that show, plus three new studio tracks including an Elvis cover, would comprise the 1993 Thrall: Demonsweatlive EP which was released alongside a slightly remixed version of “Mother” with a new video.  This video would receive airplay on MTV and it soon became a modest hit, propelling the band’s debut record and EP to gold status.

The band would follow-up the success of “Mother” with Danzig 4p in 1994.  4p would do well but not as well as the label was hoping for.  The single “Cantspeak” cracked the Top 100, making Danzig technically a 2-hit wonder, and the tour was fairly successful.  The band would also be asked to play on the main stage of the inaugural Ozzfest and did a support tour with Metallica as well, during which Glenn would join the guys on stage in some cities to do some classic Misfits tracks.

It was also around this time that the band began to fall apart.  Chuck Biscuits’ drug problems became too much to contend with and he would be replaced by new comer Joey Castillo for the 4p tour.  Glenn had long wanted to replace John Christ on guitar and by ’94 the feeling had become mutual and the two agreed to part ways following the tour.  It was at this time that Eerie Von also chose to leave, citing burn-out and being genuinely disappointed that the other guys were leaving.  The label, now known as American Recordings, was also showing little or no interest in re-upping on a new deal so Glenn shopped his talents around and was able to land a seven figure deal from start-up Hollywood Records.  This marriage would last only one album, the much maligned Blackacidevil, as the band’s parent company Disney wanted nothing to do with a band that was often associated with Satanism.  The deal would be terminated, and what would follow would be several years of legal battles between Glenn and Disney.

It wouldn’t be until 1999 when Danzig would resurface.  Now on Emagine Records, the band still consisted of Glenn and Joey Castillo on drums, but also had Josh Lazie on bass and Jeff Chambers on guitar.  This lineup would record Danzig 6:66 Satan’s Child, an album built up as a return to form for Danzig but ultimately would not meet those expectations.  Following the album’s completion, Chambers was replaced by Todd Youth (allegedly because he didn’t fit the band’s image) and Lazie would leave of his own accord and be replaced by Howie Pyro.  The first leg of the Satan’s Child tour featured a mini Samhain reunion and would prove to be the highlight of the tour.

With the collapse of the Emagine label, Danzig would self produce everything and seek out distribution deals.  He inked one such deal with Spitfire for the 2002 follow-up to Satan’s Child, Danzig 777 I Luciferi.  The same lineup as the previous tour recorded this one, but all would be replaced afterwards.  Circle of Snakes would follow in 2004, the tour for which featured a guest appearance by former Misfits guitarist Doyle.  Together he and the band would play a short set of Misfits songs during the Danzig set. 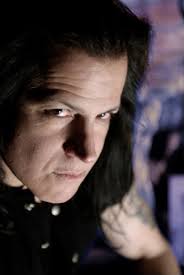 Now in his mid 50’s, Danzig proved with “Deth Red Sabaoth” that he’s not done yet.

Circle of Snakes would be the last album for Danzig for quite some time.  During his hiatus he would put out a classical album, Black Aria II, the follow-up to his original collection of classical music put out in 1992.  2007 saw the release of the long-awaited and much anticipated Lost Tracks of Danzig, a two-disc set spanning the band’s entire existence containing mostly unheard tracks.  It wasn’t until 2010 when a new Danzig record would be released, the well-received Deth Red Sabaoth, which may end up being the final proper Danzig album.  Only time will tell.  It so far has lead to a mini resurgence for the band.  Not only did it sell well, but Danzig even found himself on the soundtrack to the blockbuster hit The Hangover, introducing his song “Thirteen” to a whole new audience.  The band also has a new song featured on the sequel’s soundtrack set for release on May 24th, titled “Black Hell.”

It’s my intention to post a review for each Danzig record, the major releases and the smaller ones including both Black Aria records.  I’ve already posted reviews for Danzig II and Danzig 4, so check back for a review of the 1988 self-titled record in the near future.  I haven’t decided if I’ll just review them all chronologically or not, but eventually they’ll all be posted and hopefully readers find them both interesting and useful.