Considering The Hangover Part II just opened this past weekend, which contained a new studio track from Danzig, it makes this post a bit more topical than most.  Glenn Danzig has had few brushes with motion picture soundtracks over the years.  Some, like the first of “The Hangover” films, contained a track already included on a Danzig release.  In that case the song “Thirteen” from Danzig 6.  Danzig has also seen the song “Mother” included on the Grand Theft Auto soundtrack and it has also shown up in other places, though I believe that particular one was the only released soundtrack to include it.  And then there are other films that included originals.  Again, these are few but in an effort to be all encompassing where Danzig is concerned I’ve decided to make a short entry on these rare gems. The Less Than Zero soundtrack cover

This song was actually among the first Glenn Danzig wrote after joining the Def American label.  The label was handling the soundtrack for the film, Less Than Zero, and Rick Rubin asked Danzig to contribute.  Glenn wrote the song and modeled it after Lulu’s 1967 hit song “To Sir, With Love,” though it was not considered a cover.  The song was written by Glenn with the idea that someone else would record it.  Thus, it’s not a typical Glenn Danzig song by any stretch of the imagination.  The lyrics focus on a dying friendship, making it topical with the film, and features a small orchestra and choir.  Apparently, whoever was supposed to record the song was unable to do so or didn’t want to, so Rubin asked Danzig to step in.  Eerie Von either didn’t like the bass line or Rubin didn’t like how he played it, so studio musician George Drakoulias filled in, which is why the name of the band on the credits wasn’t Danzig (and also, since the song was not indicative of the Danzig sound one can see why the band was called something else).  Nonetheless, fans should be happy with how things worked out because this is a rare little gem of a track.  The borrowed melody is poppy and infectious and Glenn really cuts loose on vocals in a way he had never done before.  The southern choir adds a neat dimension to the song and is something that never appeared on a Glenn Danzig recording before or after this track was released.  Sadly, the song wasn’t used at any point in the film, though the other song Danzig contributed to the soundtrack was.  Performed by the legendary Roy Orbison, the Danzig-penned “Life Fades Away” dress-up the closing credits to the movie.  If you haven’t heard either and consider yourself a Danzig fan, you would do well to scour the nearest used record store for a copy of this soundtrack (and checkout the youtube link at the bottom to hear “You and Me (Less Than Zero)”)

Songs in the Key of X

The title to this soundtrack is Songs in the Key of X:  Music From and Inspired by The X-Files.  It’s a soundtrack for the Fox television series the X-Files and it’s not.  It had nothing to do with the feature length film released a few years later and was intended as a complimentary piece for television fans.  Most of the songs were never featured in the show and actor David Duchovny was reportedly the one responsible for getting Danzig onto the soundtrack.  This was also during Danzig’s flirtation with industrial music, and the song he contributed was similar in sound to what he would put out on Danzig 5.  “Deep” starts off like a slow brooder that shares some lyrical similarities with the track “Sadistikal” off of Danzig 4.  It has an odd inorganic drum pattern under the verse and some industrial noise.  Danzig’s vocals are clean and the song breaks into a big chorus where the guitars come in.  A re-mix titled “Deeper” would later appear on the 2000 reissue of Danzig 5, and several more remixes would appear on the reissued Sacrifice EP.  Some fans seem to really dig this track and prefer it to most of the songs on Danzig 5, but I find it kind of drab.  The remix “Deeper” is a little better, but this song as it appears here is merely okay (though I do agree that it sounds better when compared with some of the stuff on Danzig 5).  For those looking to score a copy of this song on CD, good news, because you don’t have to purchase this soundtrack if you’re not interested in the other bands.  This track was also included on 2007’s The Lost Tracks of Danzig and if you’re a Danzig fan and you don’t have that already, what are you waiting for?! 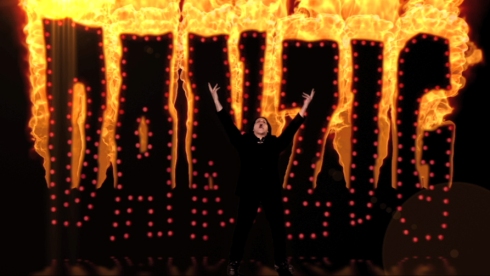 “Black Hell” would receive a video clip years later as part of The Legacy TV Taping.

From the soundtrack to The Hangover Part II, “Black Hell” could have the distinction of being the last properly released Danzig track.  It’s no secret that Glenn Danzig is getting older and has become disenchanted with the music business which allows for the possibility that 2010’s Deth Red Sabaoth is it for him.  There’s likely a covers record coming and at least one additional original Danzig song is known to have been recorded and left off the last album, titled “Long Dark Road.”  Either way, there’s not much left in the pipeline.  Things could change, since about 4 years ago Danzig said he was done touring and as we speak, the band is preparing to head for Europe, so if you wish to hold out hope go for it.  “Black Hell” is similar in style to “Thirteen,” which as I mentioned earlier, was included on the soundtrack and film The Hangover.  Apparently director Todd Phillips is a big Danzig fan, which is how this relationship was born.  “Black Hell” opens with a slow kick drum beat and a simple guitar strum and Danzig singing over it in a deep, ominous voice.  The lyrics are fairly standard for Danzig and after the first verse a haunting electric guitar riff comes in.  Eventually the song builds to a big chorus, and carries this sound through to its conclusion.  It’s a fairly simple track but effectively moody.  I especially like the use of the electric guitar which stays in the background (I should note, the strum riff is also played on an electric).  The vocals have a layered effect on the chorus with one really high one that adds to the song’s apocalyptic feel.  Unfortunately, the songs aren’t sold separately on digital music stores and if you want it you have to buy the whole soundtrack, which is mostly terrible.

That’s it though, just three original songs included on soundtracks.  I would say one is great, one is average, and one is kind of a throw-away.  It’s hard to say if Danzig will have any future contributions to soundtracks, though I’d consider it unlikely.  I did not mention the song “Underbelly of the Beast” from The Crow: Salvation soundtrack because it’s just a remix of “Belly of the Beast.”  It, like “Deep,” is also included on The Lost Tracks of Danzig.