Episode 5 of the inaugural season of X-Men introduced the audience to everyone’s favorite love triangle:  Cyclops, Jean, and Wolverine.  Cyclops and Jean are romantically linked and by all accounts are very much in love.  Wolverine lusts for Jean, and while she comes across as sympathetic to his feelings, her heart lies with Cyclops.

The meat of the episode involves Jean and Cyclops getting kidnapped by The Morlocks while out on a date.  The Morlocks’ leader, Callisto, views Cyclops as a weapon and wishes to make him her husband to strengthen her position as leader of The Morlocks.  Xavier has Storm lead a team of X-Men (Wolverine, Gambit, and Rogue) into the sewers where The Morlocks reside to rescue their comrades.  This brings in another conflict for the plot as Storm is forced to face her claustrophobia.

This episode is often derided as Season 1’s worst.  The Morlocks are an uninteresting villain and it seems like even a small team of X-Men should be able to handle them with relative ease.  The whole claustrophobia angle was definitely uninteresting for me as a younger viewer and as an adult it still feels kind of forced.  And as good as the writer’s for this show were, they never were able to appropriately handle Wolverine’s affection for Jean.  He comes across like a teenager who can’t get the girl he wants and the whole angle would become way over-played throughout the show.

And ultimately, kids didn’t want to see Wolverine like this, they just want to see the bad ass side.  Though I do like his tough love approach for Storm and her claustrophobia.  In the end though, a rare dud for the early seasons of X-Men.

After not wanting to deal with Jean’s adoration of Cyclops, Wolverine flees to the arctic region of Northern Canada for some solitude.  In his quest for inner peace, he is confronted by his old nemesis Sabretooth who puts a tribe of local eskimos in between their feud.

This was the show’s first Wolverine centered episode, and while he would end up with more solo episodes than any other character, the writers never over did it (which is something the people over at Fox could learn to understand).  This episode depicts a vulnerable Wolverine once again.  As a man who’s life is plagued by violence and tragedy, he just wants to get away but his past is always there to haunt him.  Sabretooth is a good villain for Wolverine and serves to remind the viewer what Wolverine could have become had he given into his more primal nature.

The tribe gives Wolverine an outlet to be at ease and we’re able to understand what it is about them Wolverine so admires.  The young tribesman who views Wolverine as a threat is perhaps over done but serves a purpose.  Really, the only downer about this episode is there isn’t much of a payoff.  Plus, we see Wolverine act a little too wimpy when he tells Sabretooth, “I don’t want to fight you.  I don’t care who started it.”  That’s not the Wolverine anyone wants to see, plus it’s too much of a role reversal from the blood thirsty Wolverine we saw just two episodes ago in “Deadly Reunions.”

In the end, their fight is slightly more interesting this time around, but it is still obvious the censors prevented it from being anything worthwhile (there’s one really odd exchange with Sabretooth throwing snow in Wolverine’s eyes that just screams “edit!” all over it).  Thankfully, the episode doesn’t leave Wolverine as some shamanistic man of peace and he is pretty much back to his old self soon after. 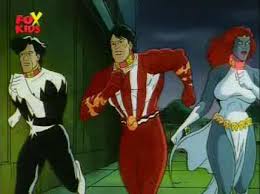 This episode contains several cameos of other mutants, some of which would become major players in future episode plots.

Throughout the previous episode there were a couple of scenes showing the X-Men receiving information about the island nation of Genosha and its apparent acceptance of mutants.  Cyclops selects Storm, Gambit, and Jubilee to go check it out.  At the episode’s conclusion, they’re shown being gassed in their hotel room and captured by a Sentinel and a small band of solders.

This episode picks up right where that one left off, and Storm, Gambit, and Jubilee are imprisoned in a mutant work camp.  This episode introduces the mutant power suppressing collars.  All of the mutants wear them and a controller deactivates them during the day so the mutants can use their powers to construct a dam.  It is said if the mutants tamper with the collars they’ll explode though later episodes would prove that to be an empty threat.  Storm tries to rally the mutants into a rebellion and the controller reactivates the collar forcing her capture.  As punishment, she is placed in “the box” where her claustrophobia pretty much drives her mad.

This episode features numerous cameos from other mutants.  It also introduces Cable, who’s past is apparently different from his comic book past.  Here he’s after The Leader, who is apparently behind the whole operation on Genosha, and who he supposedly served under as a marine.  Cable will go on to display little knowledge of the X-Men in both this episode and the following.  Similar to the situation with Magneto, in future seasons Cable will be portrayed more faithfully as the time-traveling son of Cyclops and Jean.  He is given this really cool gun though that seemingly turns anything it hits into a bomb.

What helps keep this episode interesting is the seed it plants in the viewer’s head regarding the Gambit character.  How much of a team player is he?  The swerve is nicely set-up, and in the end we find out he’s an X-Man through and through, but there is a moment of doubt.  Jubilee gets her first taste of action and she’s actually used effectively.  It’s no secret most fans have a strong dislike of the Jubilee character.  This is actually one of the few episodes that doesn’t feature much from Wolverine.  His role is reduced to just a brief cameo showing his return from his trip in the previous episode.  Xavier also takes off unannounced to visit his old friend Moira MacTaggert  and to investigate a future plot device.

The Sentinel creation process is also shown for the first time, introducing the character Master Mold, a giant Sentinel that manufactures the rest and the reason for the dam’s construction.  The Sentinels continue to be de-powered by the writers since their original appearance, and the X-Men are able to dispatch them with relative ease.  The dam gets destroyed calling into question if Master Mold was destroyed as well, while Trask and Gyrich make their escape to show up in a later episode.

The X-Men will need all the help they can get to stop the Juggernaut.

At the end of “Slave Island,” the victorious X-Men return to find their mansion destroyed and the Professor missing.  They immediately set out to try and find the individuals responsible which leads Wolverine and Jubilee to a construction yard where a young mutant from Russia makes his debut.  Colossus, depicted in street clothes as opposed to his costume from the comics, is suspect number 1 for the X-Men.  We the viewers, of course, know Colossus is a good guy and wouldn’t smash a mansion just for the fun of it.  Wolverine determines the same, and Colossus is cleared.

Not for long though, as he’s shown getting arrested later on for an apparent bank robbery.  The case of mistaken identity leads Wolverine and Jubilee to another robbery, where they find their real mansion-masher, the Juggernaut.

Unlike Magneto, the X-Men are shown as being all too familiar with the Professor’s jealous step-brother.  All of the X-Men, and Colossus, are forced to take him on in the city streets where they use team work to win the day.  Beast also makes a cameo during a jail break scene where Rogue and Storm free Colossus.

In the end, the X-Men are successful and subdue the Juggernaut.  Colossus helps in the rebuilding of the mansion but declines an invite to join the team.  The episode works as a fun way to show all of the X-Men in battle against a worthy foe.  Juggernaut is an amusing villain who is well written and also well-voiced.  A solid, action-packed episode.