Ranking my favorite albums has reminded me just how much I love them.  Avantasia’s The Scarecrow is no exception as it’s an album I simply cannot get enough of.

For those unfamiliar with the Avantasia name, it’s the side project of Edguy frontman Tobias Sammet.  Avantasia was initially conceived as a metal opera that borrowed heavily from the speed metal genre and incorporated multiple vocalists and guest musicians.  Two albums were released early last decade under the heading The Metal Opera and were well received by fans and critics alike.

The Scarecrow was never intended to be the third Avantasia record.  Sammet had felt he had done all he could with speed metal but there was still a desire to create music outside of his main band Edguy.  He joined forces with famed rock/metal producer Sascha Paeth to begin construction on his third solo effort.  At some point during the writing process, Sammet decided to release his latest effort under the Avantasia banner. 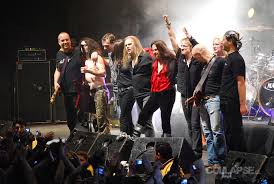 The Scarecrow is not a metal opera but it does share many similarities with its predecessors.  The album makes use of multiple vocalists though this time around their roles are not as clearly defined.  With the first two albums, each vocalist played a character where as here they represent different emotions with the only exceptions being Jorn Lande’s Mephistopheles type character and Alice Cooper’s Toy Master.  In addition to Lande and Cooper there are vocal performances by Avantasia vets Bob Catley and Michael Kiske as well as new comers Roy Khan and Amanda Somerville.  Sammet is the only vocalist to be featured on every song.

While Sammet has moved away from speed metal, there are still a couple of tracks familiar to Avantasia fans.  “Shelter From the Rain” is very much a song in the same style as old Helloween tracks (hence why ex-Helloween vocalist Michael Kiske is featured) and there aren’t many Avantasia tracks faster than “Another Angel Down.”  “The Devil in the Belfry” also brings some speed towards the end of the album but represents the last of such tracks.  The majority of the album falls into a mid-tempo groove.  Some songs come across as almost pop rock such as the singles “Lost in Space” and “Carry Me Over.”

Avantasia is the creation of german heavy metal vocalist and song writer Tobias Sammet, who also handles bass duties on the album.

The title track is the album’s biggest number coming in at over 11 minutes.  It starts off slow and works its way towards a big outro.  Perhaps it isn’t as central a piece as Sammet intended but it does work, though it takes a few listens for its impact to be felt.  “The Toy Master” features Alice Cooper on lead vocals and is a really atmospheric track drizzled in personality.  Cooper does a great job bringing life to the character and the song features some of Sammet’s more imaginative lyrics.  “I Don’t Believe In Your Love” is another song that comes across as more rock than metal but is punctuated by excellent pacing.

The only track that comes across as a dud for me, and the reason why this album isn’t higher on my list, is Sammet’s duet with Amanda Somerville, “What Kind of Love?”  It’s the signature ballad of the record and while I have no issues with ballads, this one falls flat.  It comes across as cheesy and overdone.  Some of Sammet’s vocals are a bit over the top and Somerville’s lack subtlety.  It’s not awful, but is worth skipping over when listening to the album as a whole.

One song doesn’t hold this album down though or keep it from being the best Avantasia record to date, which is saying something.  The first two Metal Opera albums had some excellent material though each one contained more filler than The Scarecrow.  The Scarecrow had two follow-up albums released in 2010, and of the two, The Wicked Symphony comes in as a close second to The Scarecrow.

With Avantasia, Tobias Sammet runs the risk of outdoing his main band Edguy.  With five albums under his belt it’s debatable which band has the better discography at this point.  I would probably still take Edguy’s catalogue over Avantasia but it’s not an easy decision.  Hopefully Sammet has the energy and the desire to keep on supporting both bands as I don’t think Avantasia has come close to running its course just yet.  Sammet has found a nice niche for himself in straddling the line between rock and metal and there’s more room to explore.  The Scarecrow is an easy recommendation for music fans of many tastes.