When I first conceived of this list I gave some though to splitting up the two albums featuring vocalist Tobias Sammet but figured that would defeat the purpose.  If Avantasia comes in at #8 and Edguy at #7 then so be it.

Edguy is, of course, Tobias Sammet’s principal band.  He along with Jens Ludwig, Dirk Sauer, Tobias Exxel, and Felix Bohnke have been putting out albums since 1997.  In its infancy, Edguy was a pretty by the numbers power metal outfit coming out of Germany, a hot bed for that kind of music during the time.  With obvious influences being drawn from the likes of Iron Maiden, The Scorpions, and Helloween, Edguy was carving a name for itself in the metal community.  Coming off their best album to date, Theater of Salvation, Edguy took a little break for Sammet to explore musically and record the first two Avantasia records.  During this time, they re-recorded their initial demo, The Savage Poetry, for a major label release and got some much needed R&R.  When they re-grouped sometime in early 2001 they began crafting their best album to date, Mandrake. 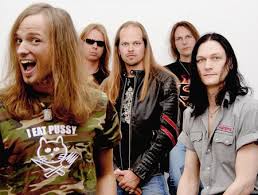 Edguy - not to be taken seriously.

metal roots.  The album contains everything a power metal fan would dream about, combining speed and melody for a pulse-pounding sixty minutes.  There are breaks here and there where the band slows things down and each of those tracks is woven flawlessly into the tapestry of melodic metal.  “Wash Away the Poison” represents the best of Edguy’s ballads up to this point as it manages to dodge the cheesy hooks and lyrics of their previous ones.  Instead of feeling like the token ballad of the album, it works well with the other songs and earns its place.  Other songs such as “Painting on the Wall” settle for mid-tempos and the bonus track that appears on almost every release, “The Devil and the Savant,” finds a way to make use of those Europe influenced synthesizers without ruining the track. 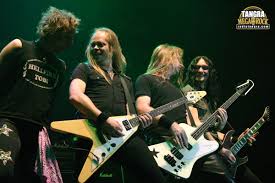 The boys in Edguy very much enjoy having fun on stage.

Where the album shines brightest though is on the opener “Tears of a Mandrake.”  It’s a bombastic mid-tempo epic that has become a staple in the live show.  It is one of those songs where the chorus leaves a lasting impression.  Not to be outdone, is the album’s big number, “The Pharaoh,” which comes in at a running time of  10 and half minutes that never feels that long.  A lot of epics end up being long just for the sake of being long, but “The Pharaoh” is wonderfully crafted with multiple time changes and new hooks as it twists and turns its way towards a satisfying conclusion.  Sammet’s high-flying vocals work well with this song, and the twin guitar attack adds a spice to the mix.

The album also knows when to bring the noise, so to speak, with the head-banging “Nailed to the Wheel” providing some nice, crunchy, riffs.  And an Edguy album wouldn’t be an Edguy album without a little bit of that quirky humor the band is known for.  “All the Clowns” is a light, catchy song that only Edguy could get away with on a metal release.  “Save Us Now” contains the most ridiculous of Sammet’s lyrics as he refers to drummer Felix Bohnke as a high speed alien drum bunny.

Perhaps the band realized it could never make another power metal album as good as Mandrake and that is why it has never tried to since.  After the release of Mandrake, Edguy would go on to sign with major label Nuclear Blast where it has released three albums since.  Each successive album has contained more rock elements with the old power metal sound slowly fading away.  That’s not a criticism as each of the following albums has been good in its own right.  Mandrake though does represent an end of an era for the band and that era went out on one gloriously high note.