Home Alone, the John Hughes produced and Christopher Columbus directed film that dominated the holiday season of 1990, demanded a sequel. The film starred ten-year old Macaulay Culkin as Kevin McCallister, who was eight according to the film’s script. Considering the star was already two years older than the character he was playing, and getting older every day, a sequel had to be written, produced, and filmed rather quickly. The problem, of course, is that Home Alone is the sort of movie that really shouldn’t have a sequel, but given the economics of film-making, it was going to have to make do with one.

A friend of mine and I had a disagreement over the Home Alone series. I consider the original a Christmas Classic. It’s not a perfect movie, by any means, but it is entertaining and I enjoy my annual viewings almost as much now as I did when I was young. As for the sequel, well, I’ve never had much love for it. Even when I saw it in the theater as a kid I knew what it was:  a cash-grab, carbon-copy of the original. I never saw much use for it after that initial viewing. My friend, on the other hand, considers the sequel the superior film (we both consider the franchise concluded with Home Alone 2) which I strongly disagreed with. Having not really spent much time with it over the years, I wasn’t well-equipped to defend my position. When browsing the Christmas section at a local store, I happened upon the Home Alone and Home Alone 2 Blu Ray combo-pack and decided now would be a good time to revisit this film and either reaffirm my position or discover a new holiday favorite. 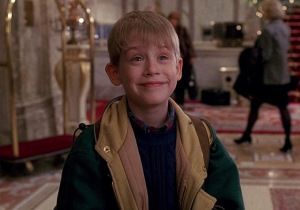 Kevin is back to make the adults of New York look like fools.

As I mentioned in the intro, the writers for Home Alone 2 were being put in a tough spot. The plot for Home Alone, of a family rushing off on a vacation to Paris forgets their son at home, is ridiculous on the surface but presented in a way that makes it believable enough for a comedy. Now what isn’t easy is convincing an audience that it could happen again. To forget one’s child at home is a pretty serious infraction. Most of us would jump to conclusions and suggest that anyone who did that is not fit to be a parent, but as I said, the first film does a well-enough job convincing us that the McCallisters aren’t the worst parents in the world. If they were to forget young Kevin again though…

How does Kevin wind up in New York? Well, let’s start from the beginning. Pretty much everyone who worked on the first film returned for the sequel including the cast, writers, and other talents that made the first film such a huge success. And once again, the McCallisters and their extended family are preparing to head out on vacation for the holidays. It’s been one year since the events of the first film and everyone is in Chicago to spend the night before flying off to Miami in the morning. Before the family can take off though, they have to attend a Christmas recital that Kevin and Buzz are both singing in. When Buzz, standing behind Kevin onstage, acts out during Kevin’s solo the younger McCallister is embarrassed and slugs his older brother in response, which somehow collapses the scaffolding on the stage. Back at home, both boys are expected to apologize to the family and make-up before everyone can go to bed and rest-up for the morning. Kevin, feeling that he’s done nothing wrong, refuses to apologize and insists he’s still being dumped on by the family. He and his mother exchange words, and everyone goes to bed angry with one another.

Of course, these guys are back too and somehow bump into Kevin in the middle of the city.

This, of course, is basically how the first film started with only minor modifications and everything here is presented worse than it was in the prior film. Kevin is angry, and rightfully so. In the first film we could see that he’s kind of a pain in the ass and could understand the family’s position. Here it’s just stupid. Buzz’s actions during the recital get a huge reaction from the crowd, and even Uncle Frank concludes they were “pretty god-damned hilarious,” which is just over the top. It’s not that funny, and no reasonable person would be angry with Kevin, and it makes me feel like my intelligence is being insulted. Also of annoyance to me, is the fact that Kevin is ten years old in this film, despite it only being a year after the events of the first movie when Kevin was eight. Now, normally this wouldn’t be that big of a deal but in both movies Kevin makes it a point to remind people how old he is on multiple occasions. Why didn’t they just make him nine? It just bothers me. And Kevin and his mom’s conversation prior to him going to bed is so similar to the first movie it hardly seems worth having. He even wishes to have a vacation without his family and she basically challenges him to make it happen, like she did in the first film when he said he didn’t want to see her again for the rest of his life. Does no one in this family learn anything?!

The setup of the movie is lazy at best, awful at worst, but it’s not going to make or break the film. So how does Kevin wind-up in New York? He gets separated from his family at the airport while fishing through his dad’s carry-on for batteries for his Talkboy (in stores this holiday season!) and then mistakes another man in the same coat as his dad for his dad. Like the first movie, it’s a mad dash to the gate for the family to make the flight so they lose track of Kevin. They get on the correct flight, but Kevin winds up on a flight to New York thanks to a collision with a worker at the terminal. Kevin, who seems like a smart and crafty young boy, gets on the plane and never notices that his rather large family is missing. Meanwhile, no one on the correct flight thinks to double-check and make sure Kevin is there. Considering this has happened before, why wouldn’t they?! Instead, it’s not noticed until the family is at baggage claim.

Meanwhile, Kevin checks into a fancy hotel in New York quite happy to have ditched his family. He makes fools of the adults running the hotel, and thanks to the large amount of cash in his dad’s luggage, has no trouble seeing the sights and having fun. Unfortunately, the Wet Bandits are in New York too, and somehow in a city of millions end up running into Kevin. Marv is quite eager to tell anyone their new master plan of knocking off a toy store on Christmas Eve, and Kevin decides it’s up to him to stop them (apparently the police can’t be trusted) by luring them to his uncle’s vacant house full of booby traps.

They should probably be dead at this point.

What does this movie get right? Not much, I’m afraid. I’ve already expressed my displeasure in the ridiculous setup but I can say the film does improve once Kevin is in New York. This is where the writers actually do a decent job of making Kevin’s actions believable. As he did in the first film, he takes advantage of adults who just think of him as a kid and is able to utilize his VCR and Talkboy in ways that trick adults into thinking they’re being scolded or even shot at. It is just as far-fetched as anything else, but feels smarter and does produce laughs. The main event, so to speak, is Kevin’s repeat encounter with the burglars from the first film. Here the writers are challenged to top what they did in the first film and the director is expected to make the visuals stand-up. Unfortunately, their attempts to top the first end up being just as lazy as the first scenes. Variations of the paint can, blow torch, and other gags are repeated. A few new ones are added, but few are all that memorable. Instead they end up being more absurd. While the damage sustained by the two in the first film certainly would have resulted in lasting damage, many of the traps in this one would have ended in death. Of course they don’t, but they’re certainly harder to believe.

When a sequel is so similar to the movie it’s following you look for any difference between the two, like Fuller’s new affinity for Coke instead of Pepsi.

There’s also a B story at play, much like Kevin’s encounter with his elderly neighbor in the first film, only now it’s with a homeless pigeon lady in the park. It’s very derivative of the first, though I will say the acting of Brenda Fricker is not the reason why. Which brings up a larger point of contention that I have with this film:  the acting. If I’m going to accuse the writers of being lazy with this film I could certainly say the same of the actors and actresses present as well. The established ones seem to just phone it in or ham it up. Macaulay Culkin is pretty terrible, especially in the early scenes of the film. The actors aren’t presented with great material to work with, but they still don’t exactly step up to the plate. At least the John Williams score is still good.

In conclusion, I cannot agree with my friend that Home Alone 2 is superior to the original Home Alone. Everything about it feels too familiar and the gags just aren’t as funny the second time around. There’s nothing plausible about it and the only reason the film exists is because it had to. It was a major box office success, not on the level of the first but it still basically printed money. And that’s really all the film was supposed to do. I’m sure everyone working on it expected it to be worse than the first but were happy to take home some nice checks. Watch this one only if you’ve seen the first one too many times and just need something else to watch. Even after you do, you’ll likely end up wishing you just watched Home Alone instead.