For over ten years, James Rolfe’s Angry Video Game Nerd character has been entertaining viewers with humor-laden rants on “classic” video games and movies via that amazing thing known as the internet. The videos first appeared on his own website before migrating to Youtube where they gained a following that seems to still be growing. Today, the videos are contained and published on Rolfe’s own website, cinemassacre.com, along with his other films and humor shorts. Over the years Rolfe has added other characters to his stable including Board James and the Bullshit Man, but it’s the Nerd who is easily the most popular of them all.

The Nerd videos successfully tap into nostalgia by invoking memories of frustrating evenings spent with a terrible game just rented from the local video store. Everyone who grew up in the 80’s and 90’s who played video games can probably recall a few bad decisions that lead to tossed controllers or broken toys. For most kids of that era, picking a game at the rental store was like tossing darts. You could judge them only on so little. Some games would print screenshots on the back of the box while some would force you to go off of the cover art alone, which was often purposely misleading. I know I personally encountered many duds, usually selecting a game based on a license I was familiar with through television or film. That’s how I ended up getting stuck with Road Runner on the NES for a weekend. If you’ve never played Road Runner on the NES consider yourself lucky. Watching someone else slog through these games has proven to be entertaining, and Rolfe is able to blend in other elements to keep things fresh and entertaining. What once were simply clips of gameplay with cuts to the Nerd’s reactions have grown into elaborate skits and battles to the death with the likes of Bugs Bunny and R.O.B. 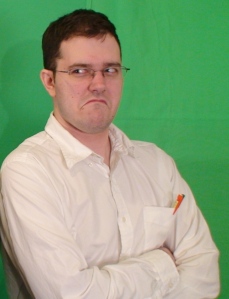 As the years have gone one, it has become harder to find games worthy of the Nerd’s time. One game though has been saved, the infamous E.T. for the Atari 2600, which is the so-called worst game ever. This was a game Rolfe and his friend and collaborator Kevin Finn decided could not be confined to the usual ten minute internet video and instead announced that they were pursuing a feature-length film for the Nerd. They attempted to get backing from actual production studios based in Hollywood, but when that didn’t work, they turned to crowd-funding and were able to come away with enough cash to make the film a reality. It took a long time for the movie to be filmed, edited, and eventually released, but hopefully the wait was worth it for those involved and those who were eager to see it.

When it was announced this summer that Angry Video Game Nerd: The Movie would receive a limited theatrical release, I was on my honeymoon, and as a result, missed out on the ticket pre-sale. The film was released digitally in the fall, but I opted to just wait for the Blu Ray which arrived the week before Christmas at my residence. As a fan of the web series, I was intrigued at how Rolfe and company would turn a ten minute video into a feature-length film. Would the Nerd prove interesting enough a character to command my attention for nearly two hours? And how would the production come across given the budget?

Well, I would say that, for the most part, the film works. The premise of the film is that everyone and their grandmother wants the Nerd to review E.T. (known as Eee Tee in the movie for obvious reasons), but because he has such bad memories of the game from his childhood, the Nerd refuses. A video game company, Cockburn Industries, takes note of the Nerd’s popularity and how his videos have actually lead to a demand for the bad games he reviews. They decide to green-light a sequel to Eee Tee and get the Nerd to review it, at which point he’ll condemn it and people will buy it. Cockburn sends one of their executives, Mandi (played by Sarah GlennDanzig, I mean, Sarah Glendening) to befriend the Nerd and his associate, Cooper (Jeremy Suarez), and get the Nerd to agree to a review. She poses as a nerd herself, and by getting Cooper and the Nerd to make a friendly wager over whether or not the Atari landfill story is true or not, finds a way to get the Nerd to agree to a review. She organizes a search team to scope out the landfill area in New Mexico, while those involved soon find themselves attracting the attention of a military group charged with protecting the secret of Area 51, which is located nearby. It’s all pretty crazy, but essentially the Nerd and his friends spend time illuding these military types and getting caught in a massive conspiracy theory surrounding the game and its ties to the existence extraterrestrial life. There are aliens, a massive god-like monster being, and even Howard Scott Warshaw himself (the creator of the actual E.T. 2600 game), along with a whole bunch of other stuff I’d rather not spoil.

Some of the actors joining Rolfe include (clockwise from top right) Time Winters, Sarah Glendening, and Jeremy Suarez.

The plot of the film is supposed to be “out there” with purposely telegraphed twists and over-the-top characters. The villainous General Dark Onward (Stephen Mendel) is especially creative as he’s a paraplegic with a tank for a lower body who has a penchant for losing limbs. Time Winters is entertaining playing the required illusive genius who clues the group in on the secret of Eee Tee while Helena Barrett plays a capable right-hand woman to Dark Onwardby the name of McButters. The actors are mostly veterans of small productions like soap operas and commercials who mostly handle themselves well. The script they’re given is full of silly, corny, lines that they sell well. One of my concerns going into the film was how Rolfe would stand-up amongst professional actors. Any concerns I had were remedied early on as Rolfe clearly knows how to both write for his venerable character and how to portray him. If there’s a weakness in the script, it’s with the Mandi character and McButter. Perhaps not accustomed to writing dialogue for women, Rolfe and Finn’s script for the two aims for cheese but often misses the mark. Their cat-fight scene meant to induce laughter instead brings about groans. 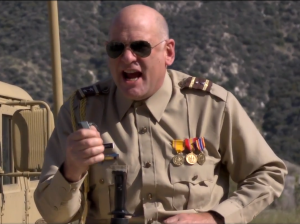 General Dark Onward is probably the most ambitious character in the film.

The production is noticeably done on the cheap, but it doesn’t limit the film’s scope or imagination which is all that matters. There are lots of easter eggs buried in both the plot devices and the way certain effects are handled (including an obvious homage to one of the worst films of the 1990’s, Teenage Mutant Ninja Turtles III). Rolfe opted primarily for practical effects in lieu of computer generated ones. The films makes frequent use of miniatures, which aren’t really designed to trick the viewer, but are instead meant to amuse. Some of them are quite spectacular and I found it enjoyable watching these scenes and trying to imagine what the crew went through bringing them to life. There are some computer effects, like a Mario inspired lava sequence, and they impressed me in their scope. The soundtrack was handled by Bear McCreary, whom fans of The Walking Dead should recognize. His score makes liberal use of video game sound effects from that era as well as the Angry Video Game Nerd theme song by Kyle Justin. It’s the film’s strongest point, and while not the type of soundtrack I’d seek out, it perfectly suits the film and enhances the viewing experience.

Angry Video Game Nerd: The Movie should satisfy fans of the Nerd and gaming culture alike. It’s also clearly a love-letter to classic sci-fi and adventure pictures and the influences of films like Raiders of the Lost Arc and Godzilla are easy to spot. The plot is large and as captivating as a film based on the Angry Video Game Nerd could possibly be. If I had one last nitpick with the movie it’s that the Nerd doesn’t get enough of an opportunity to really get angry, but I suppose it was necessary to present a slightly more humanized version of the character in order to get it to work on film. I enjoyed the movie, and the loads of bonus content contained on the Blu Ray gave me something fun and interesting to check out after the film was over. Watching an independent film come to life is a rewarding experience. The film obviously means a great deal to those involved with it and their enthusiasm is contagious. This is a film that would be hard to hate, so it’s a good thing it turned out as well as it did.