The Wii U and Gaming in the HD Era 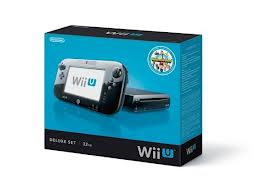 Last Sunday, Nintendo unleashed upon the world its latest console:  the Wii U.  For some, the Wii U is the beginning of the latest era of gaming while others simply view it as Nintendo’s entry into the current HD generation of consoles.  Regardless of your opinion, this is a new console and new consoles are something to get excited about.

I had made the decision to reserve a Wii U for myself awhile back so picking up the deluxe bundle on launch day was no problem.  I also picked up a new Pro controller and a copy of New Super Mario Bros. U.  As far as console launches go, the Wii U appears to have had a mostly successful one.  When I picked up mine it was around 1 o’clock and the Best Buy I went to was already sold out of the deluxe bundle.  The sales receptionist I spoke with wasn’t certain, but did think they still had a couple of the standard bundles in stock.  For those unaware, the deluxe version comes with more internal memory (32 GB vs 8), a copy of Nintendo Land, a charging dock for the GamePad, and comes in black as opposed to white.  For the extra fifty bucks, it seemed like a smart choice to me though for those stuck with the smaller unit know that the Wii U works with most external HDD so expanding upon that 8 GB of memory shouldn’t be too difficult.

If I had to use one word to sum-up the GamePad, it would be: Big.

The Wii U is quite similar to its predecessor in terms of looks.  It’s fairly small and plain looking.  It still makes use of a sensor bar and Wii remotes and the main home screen remains mostly unchanged.  The big change obviously comes in the Wii U’s GamePad, a combination of a tablet and a standard controller.  It has four face buttons, twin analog sticks, and four shoulder buttons including two triggers.  It has a slot for a stylus as well as home, power, and TV buttons.  The TV button allows you to pair your GamePad with your television and use it as a second remote.  It’s functional and kind of neat for when you have your GamePad on your lap.  The controller is fairly large, but light.  It’s nearly the same size as the console itself.  It’s light feel is welcomed, but it does make the controller feel a bit cheap.  Shaking it causes the buttons to rattle, and the shoulder triggers are not analog meaning there’s no sensitivity to them (pushing it all the way in or slightly has the same in-game effect) which is a bit of a letdown.  The touchscreen though is large and quite nice with very good picture quality.  It doesn’t seem to be quite as good as the Playstation Vita’s OLED screen, but gets the job done.  It communicates with the Wii via wireless and infrared and there’s no noticeable lag. 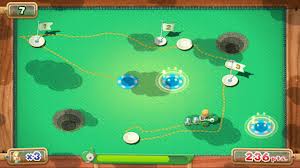 The Yoshi’s Fruit Cart game is one of the more interesting ones on Nintendo Land.

How the GamePad functions with the Wii U is obviously what will make or break the system.  Nintendo Land is the game that’s supposed to put the GamePad’s features front and center which makes it almost a required purchase for early adopters.  Nintendo Land is basically a collection of mini games each one based on a different Nintendo property.  Some of these IPs are pretty well known, like Zelda, while others not so much, such as Balloon Fight.  I’m not a big fan of mini game collections so I haven’t really got into Nintendo Land.  There is some cool stuff in there though.  The Ninja Battle game has you aiming your GamePad at the TV and sliding your finger towards the screen to toss ninja stars.  The Yoshi Cart game has you draw a line on the GamePad for your cart to follow to pick up fruit on the way while avoiding obstacles.  The catch is that the fruit and obstacles only appear on the TV screen while the GamePad is blank.  Games like the Zelda adventure are mostly straight forward.  The GamePad can be used to view the scenery by physically moving it, or the player can just look at the screen.  Nintendo Land seems to just scratch the surface without really showing anything revolutionary.  It will be interesting to see how Nintendo makes use of the GamePad in their classic franchises. 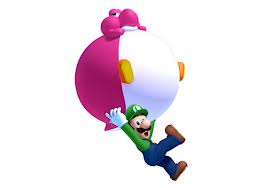 There’s no wondering when it comes to Mario though, since he has a new game at launch.  New Super Mario Bros. U is pretty similar to the previous entries in the series, GamePad or no GamePad.  I’m only a few levels deep, so I can’t say if it’s better or worse than the other entries in the series yet.  I can say that I like the Super Mario World inspired layout, and I like the inclusion of Yoshi even if he’s added as he was in the Wii game where he can only be used in certain levels.  I haven’t tried any multiplayer with it, so I can’t even comment really on the GamePad’s use there but in the single player game it’s really only used as a second screen.  Such a feature does have its uses as you don’t even need the television on to play the game, but it is disappointing that Nintendo couldn’t find a way to make use of its new toy with its flagship series.

It’s pretty nice that Nintendo has finally entered the HD era, but what isn’t nice is that they’ve also adopted a lot of what makes this era of gaming so frustrating.  The Wii U is the victim of the dreaded day one update, which means the second you plug in that new console it’s going to prompt you to update the operating system.  Ditto for both Nintendo Land and NSMBU.  The OS update took me well over an hour to update and install, while the Nintendo Land update took around a half an hour and NSMBU around 15 minutes.  That’s pretty damn annoying and one of the things that makes me long for the days of old.  Also complicating things, is the Wii U is the victim of severe loading times.  Changing screens takes around 15 seconds on the unit and booting up a game is far from seamless.  I don’t know if this is something that can be improved upon with future updates or if we’re just going to have to deal with it.

The Wii U has some things going for it, but it’s definitely not the revolution that the Wii was.  Playing the Wii for the first time felt incredibly fresh and new, while I didn’t get the same feeling when playing the Wii U.  It’s certainly fun, and there’s probably better software out there (like Scribblenauts Unlimited) for showing off the GamePad, but right now the console is far from a must buy.  Get it if you love Nintendo or want to have the latest thing, otherwise most will be fine waiting for the first big Nintendo game on it or price drop.