It was an interesting journey for the world’s most famous hedgehog to go from the small screen to the big screen, but the journey was finally completed Valentine’s Day 2020. Originally set to debut last Thanksgiving, Sonic the Hedgehog famously was delayed when fans reacted unfavorably to the title character’s design. Like Detective Pikachu before it, Sonic the Hedgehog was attempting to bring a CG version of the titular character into a real world setting. Fans were justified in their reaction to the debut of the character as he was only vaguely a representation of a character that’s been around for 30 years. The extra time, money, and effort to redesign Sonic has apparently paid off as the film raced out to an impressive debut weekend topping the weekend box office.

From the start, Sonic was always engineered to be pleasing to the eye. He was famously designed as a mash-up of two iconic characters:  Mickey Mouse and Felix the Cat. The fact that someone tied to this film decided to deviate from such a simple and effective premise feels like an ego-driven maneuver, but it’s likely it was just a result of over-thinking. Sonic the character doesn’t fit into the “real world.” He basically has one giant eye with two pupils in it, he’s a  blue hedgehog, but he doesn’t really have visible fur. And his head is bigger than his body in his classic iteration, though he’s since been elongated and given a more sleek figure over the years. The original stab at the character included fur (or quills), which was to be expected. What was odd was the attempt at shaping the face to something more rodent-like, I suppose. The end result was more of a combination of late 90s Michael Jackson and the transformed monkey kid from the original Jumanji. He had an oddly pointed nose and more natural shaped eyes to go along with a toothy smile that seemed to make viewers quite uncomfortable. His body was lean and slightly muscular – a runner’s body. Instead of white gloves he had white fur and was just all-together unpleasant to look at. The redesign basically took things back to the character’s roots. Physically, he’s more Sonic Adventure than Sonic from the Genesis. He still has textured fur as director Jeff Fowler felt that was important for a mostly live-action film, and he has two distinct eyes. He got to put his gloves back on though and his overall facial design is much more true to what fans expected. All in all, he looks nice. 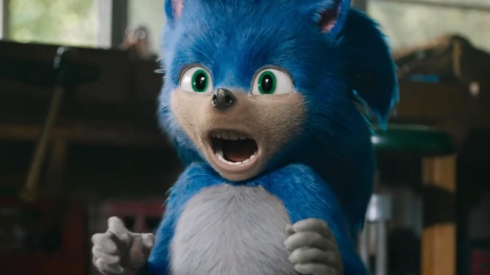 This is not the Sonic fans wanted…

Which is certainly a start. An unappealing lead is hardly a death-knell for a movie, but it doesn’t help when the character is supposed to be visually appealing. It’s not something that can rescue a bad movie though, and I would guess most assumed Sonic the Hedgehog would be a bad movie. It’s not like video game to film adaptations have a good track record. I liked Mortal Kombat as a kid, but I’d hesitate to call it a good film. I did take the family to Detective Pikachu last year and felt it was fine for what it was. I know there are some fans out there that enjoy some of the Resident Evil and Tomb Raider films, but I do not number myself among them. Expectations for a video game movie are low, and will remain low until a Marvel-like run of success so expecting anything out of Sonic felt foolish. 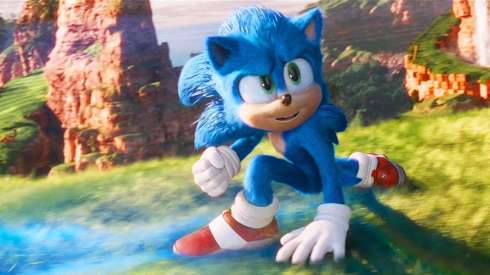 And perhaps it’s that mindset that contributed the most to my enjoyment of Sonic the Hedgehog. It’s certainly easier to be pleasantly surprised by a film when expectations are low, but Sonic the Hedgehog managed to mostly achieve the same level of success as Detective Pikachu. And a lot of that can be attributed to the success of the main character. Sonic (voiced by Ben Schwartz who has quickly established himself as the best Sonic, sorry Jaleel) is charismatic. He has a manic personality as a result of living life faster than anyone while possessing a sense of honor and responsibility which are traits that lend well to heroism. He’s playful, chatty, inquisitive, and also a touch sympathetic. He’s essentially an orphan who was targeted by some bad dudes (who bare a strong resemblance to another Sonic frenemy) for his speediness and forced to flee his home world with the help of his magic rings. The rings in the film are magical devices capable of opening up portals to other worlds, which is how Sonic arrives on Earth as a kid and is forced to live in hiding. He badly just wants to make friends, and he’s taken a liking to a local cop he refers to as Donut Lord (James Marsden) mainly via peeping on his daily life. One night, in a fit of sadness, Sonic goes a bit too fast and produces something akin to an EMP pulse that knocks out power in the community which gets the attention of the US Government.

Carrey gets to bring his own personality to Robotnik, but he’s also kept in check and turns in a very fun performance.

The film wisely doesn’t focus much on the government stuff and instead uses a very loose scene to have those in charge select one Dr. Robotnik (Jim Carrey) to investigate the cause of the phenomena. Carrey’s Robotnik bares little resemblance to the video game character (more commonly referred to as Eggman these days), but he possesses a quirky personality. Unlike a lot of iterations of Robotnik, he’s also a capable bad guy at times undone by his hubris. Carrey injects some of his usual comedic antics into the role, but nothing that becomes too over-the-top. He’s entertaining, and the only character other than Sonic capable of stealing a scene.

Robotnik quickly ends up on Sonic’s trail and from there the film turns into a road trip buddy comedy with Sonic forced to come out of hiding and seek the help of Donut Lord, aka Tom. The film does a good enough job of balancing the comedy with action. Tom and Sonic mostly get along from the start so it doesn’t play up tension too much between the leads. Not all of the comedy lands as this is a PG film primarily looking to entertain children. There’s a confrontation at a bar that’s a bit groan-inducing, as well as some jokes that amount to product placement, but the film doesn’t linger on anything long enough for it to grow boring or stale. The main plot beats are simple and easy enough to follow even for younger viewers making this one more about the ride than the final destination.

Sonic’s rings play an integral role in the film acting as portals between worlds for Sonic to escape into.

Visually, the film’s special effects hold up just fine. No, I don’t suppose I ever really bought into the concept of Sonic actually existing in this world like I may have at times with Pikachu, but I didn’t feel that harmed my enjoyment of the movie. The film makes liberal use of the slow-motion sequences popularized by the X-Men franchise when illustrating just how fast Sonic can move. Like Quicksilver, Sonic will appear to move at normal speed while the world around him is nearly frozen in time allowing him to correct a situation or just make mischief. It’s not exactly original, but it’s also not something that needed improving on. The film’s score and sound effects also make use of sounds fans of the game have grown up with. Honestly, the film could have used more of the original music as what is adapted for this film is basically the only music that stands out. 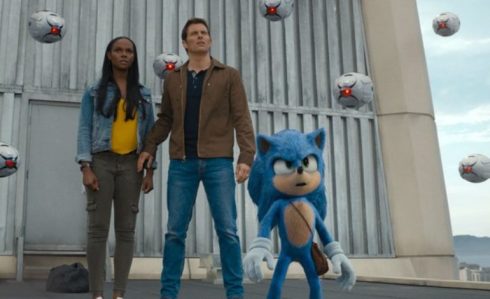 Sonic’s human allies, played by James Marsden and Tika Sumpter, don’t offer much, but they also don’t need to.

Beyond those sounds, there’s actually not a ton of fan-service in this one. There are some easter eggs, mainly the attackers early in the film, but the film mostly keeps everything in check. What’s here is enjoyable and most of it is easy to spot. Perhaps even too easy as I was hoping to come home and find out I missed a bunch of stuff that I could look for on another viewing, but I basically caught it all. I was a little disappointed that the film wasn’t able to make use of past voice actors, most notably Jaleel White, but maybe the studio tried and it just didn’t happen. The same can be said of past songs like the theme for the Saturday morning cartoon or the Sega CD “Sonic Boom” track. There is a post credits cameo that’s worth waiting for that all but guarantees a sequel as well, so if you like this then I guess that’s good news.

Sonic the Hedgehog is a competent take on the character that successfully adapts him for the big screen. It’s not a great film, but it is a short one coming it around 99 minutes and that’s all the time it needed. It’s a film worth seeing if you’re a big fan of the character, or if you’re like me and you’re just looking for a movie to take the kids to that won’t bore or annoy you. If you liked Detective Pikachu then I think that’s a pretty good comparison and a solid indicator on if you’ll like this one. Sonic moves at a faster pace and has fewer lulls, but it also doesn’t have as much heart. Its human characters are bland and uninteresting, but they thankfully are not tasked with carrying many scenes by themselves. This is a film that knows what its audience wants, and that’s Sonic. He’s front and center and quite enjoyable to spend time with. If you ever wanted to see a Sonic movie, it’s hard to imagine one turning out better than this.