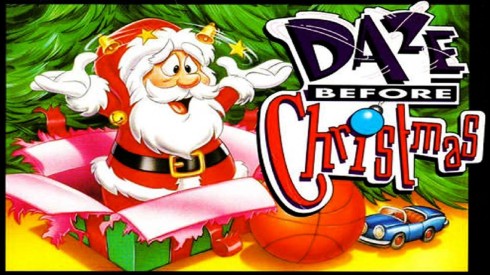 Wait, what is this? We’ve reached the final day of this year’s advent calendar style countdown of Christmas specials and it’s not even a show, movie, or stupid commercial? No friends, for December 25th we’re taking a look at Daze Before Christmas, the Sunsoft produced 16-bit Christmas video game that never saw release in North America. Christmas and other holidays are rarely captured in video games. Sometimes a game might take place at Christmas time (Twisted Metal originally did), but few actually make the holiday a focal point of the game. Daze Before Christmas, developed by Norwegian outfit Funcom, said nuts to that and made a platform game starring St. Nick himself. And you know what? It’s actually not that bad. 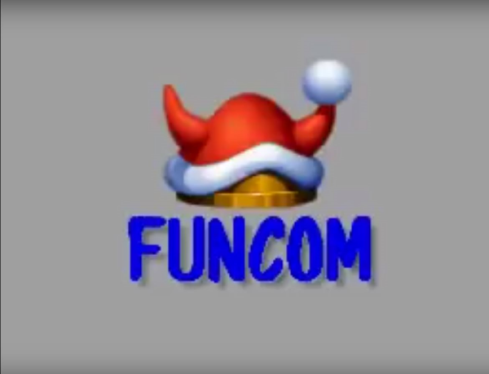 Funcom was a little developer out of Norway that apparently liked Christmas a lot.

Daze Before Christmas was originally released in Australia for Sega’s Mega Drive console (Genesis to you Americans) in 1994. It was eventually ported to the Super Nintendo for release in Europe and Australia, but a planned North American version was scrapped. Apparently, Santa is more marketable outside of the US. In this game you play as Santa Claus. An evil snowman has taken over the North Pole while Santa was sleeping or something and everything is in disarray. The player controls Santa through 25 levels collecting presents, freeing elves and reindeer, and even delivering the presents as well. Along the way he’ll explore his work shop, ice caves, and the skies of the UK and other countries and even take on some bosses here and there. When Santa finds a cup of coffee though, he’ll turn into Anti-Claus – a devilish Santa wielding a sack. He’s impervious to damage, but can’t collect presents (a trade-off most will take). As Santa, players can run and jump and shoot some white substance at enemies. There’s also a power-up that allows Santa to shoot fire which comes in handy when battling snowy fiends. 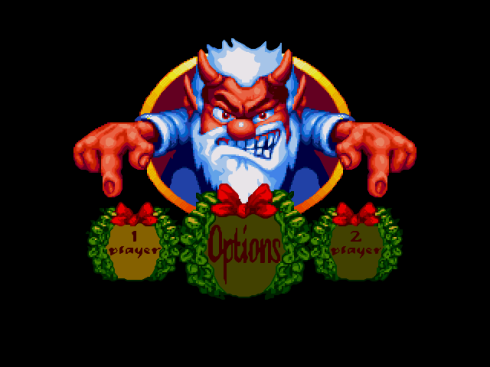 I get the impression that Anti-Claus was supposed to be the break-out star of this one. I wouldn’t mind seeing him come back in a game of his own, as unlikely as that sounds.

The levels in Daze Before Christmas vary from short, linear, bursts with traditional genre trappings (moving platforms, disappearing ones, blind jumps) and numerous enemies to other levels that are more expansive requiring Santa to explore vertically as well as horizontally. There are checkpoints in each level and finding the star icon will end the stage. In addition to surviving a level and finding the exit, Santa is tasked with recovering presents for the delivery stages. Those stages are few and far between, but in them the game becomes a horizontal scrolling flying game where Santa and his team of reindeer (only four, and I’m giving the game the benefit of the doubt there since only two are visible from the side view) have to avoid obstacles while dropping gifts down chimneys (we call that the Fred Flintstone method of gift delivery). Those levels are simple, but offer a nice diversion and it’s good to see that Funcom made an attempt at getting Santa’s central purpose into the game.

Santa coming face to face with his alter-ego.

The thing that sticks out most about Daze Before Christmas are its visuals. When I went to play this one, almost begrudgingly, I expected a very cheap looking game. And while some aspects of it are kind of cheap looking (namely the backgrounds), for the most part this looks like a game with some real resources behind it. The Santa sprite is pretty adorable. He’s short and round and has a red nose. When he ducks he goes into his hat and when standing idle he sways from side to side with a nice rotation effect on the sprite. He’s exceptionally well animated as everything is in motion as he runs and jumps through the air and overall he just plain looks great. The enemies have a lot of spunk and personality too, be they flying toys or angry rock creatures. My personal favorite was probably the snowmen that toss their own head at you. The bosses are well-animated as well and I particularly enjoyed the Louse the Mouse boss as he requires Santa to drop anvils on his head with some nice cartoon effects when successful. 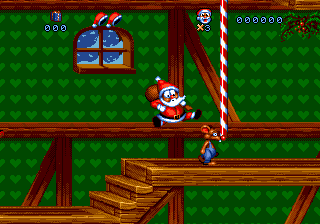 The high number of animation frames seem to have one cost though, and that’s with collision detection. While I never felt robbed of a hit when attacking enemies, vanquishing them has little or no satisfaction as they kind of just disappear. There’s a disconnect there and it’s really felt with some of the bosses as I wasn’t even sure at times I was damaging them. Some of the levels, in particular the earliest stages, almost feel directionless and play rather bland. I couldn’t help but get the impression that Funcom spent most of the development time on making sure the game looked right first, then tried to construct something that was fun to play off of that with little idea for what makes a platform game fun and unique.

The flying levels are kind of ugly, but offer a nice change of pace. Norwegians also must think footballs are just constantly flying through American skies.

That’s not to say Daze Before Christmas isn’t fun, it’s a mostly solid play through with little frustration. It’s just not particularly ambitious in what it asks of the player. Even on the hardest difficulty setting, the game is a breeze for anyone with average skill and familiarity with games from this era. The biggest danger comes from blind or near blind jumps where the player might not be certain if they’re supposed to go down a certain gap or try to clear it. Actual fatalities from repeated collisions with enemies are pretty few, and the boss fights are pretty painless. Levels start to feel repetitive and too familiar by the time the game is nearing its end, and there’s even a pair of stages where Santa runs up and down a small hill and jumps into a hole, lasting all of 15 seconds or so, which feels like an obvious attempt at padding (the game operates like an advent calendar so Funcom needed 25 levels).

The presentation extends beyond Santa’s well done sprite. The game, perhaps not surprisingly, makes liberal use of “Jingle Bells” throughout as well as other Christmas tunes, but they’re all handled rather well and I was surprised by the fact that I didn’t get annoyed with them. There’s some original music as well that’s actually really good, especially one of the cave levels. In between levels you also get some nice title cards that usually depict Santa confronting an enemy or something that are drawings as opposed to sprites from the game. The storyline, touched on earlier, is a bit confusing, but hardly essential. At the start of the game, it sounds like an evil snowman named Louse has screwed Christmas up for Santa, but the snowman is dispatched in level 5. Louse is actually the mouse character I mentioned as requiring anvils be dropped on his head. There’s a clock boss too, and the final boss is actually a cloud named Mr. Weather. Sadly, Rudolph does not offer an assist to take him out. The present delivery levels also occur in different countries and there’s little touches in each to refer to the country being presented. Maybe it’s because I live there, but the United States level amused me the most as Santa flies by the Statue of Liberty and you have to avoid footballs sailing through the air. Though Japan did feature a mouse with a rocket strapped to his back.

There are some nice touches to certain levels, such as these cartoony wrapping machines that can disguise Santa as a present.

Daze Before Christmas, due in part to its relative ease, is a game that’s probably completed in about an hour and a half. If you really know what you’re doing, where to jump, and care little about collecting presents, you can probably complete this one in under an hour. The only incentive to revisit is, as far as I can tell, is to get a higher score by finding all of the presents, but that’s not likely to motivate many. This is a pretty average platformer, though if you think the average platformer is actually pretty bad then maybe you’d consider this one slightly above average. It separates itself from the pack with its Christmas theme, and it got me thinking about the subject of Christmas games a bit more. Perhaps a game where Santa actually has to infiltrate houses to deliver gifts, avoiding detection by nosey kids, angry dogs, and cartoon wackiness would be a fun experience. It’s certainly not a genre that’s been tapped out and exploited by any means, as the most famous Christmas video game I could think of other than this one is maybe Elf Bowling. Because this wasn’t released in high quantities or in North America, it’s a pretty expensive cart to acquire. If you want to play it, it’s certainly not worth the dollars it commands on the secondary market and you’re better off experiencing it via other means you’re likely aware exist. If you want some Christmas cheer in your gaming life, you have few other options and this is certainly better than a lump of coal. Personally, I say get your Christmas cheer from other media and just grab Super Mario Odyssey instead.

Well folks, that’s a wrap. Hopefully you enjoyed this year’s countdown to Christmas. Tune in Friday for regularly schedule programming as we return to Batman: The Animated Series with an all-time classic episode. And by all means, have a very merry Christmas!

This entry was posted on Monday, December 25th, 2017 at 12:00 am and tagged with anti-claus, christmas games, funcom, mega drive, merry christmas, pal games, santa claus, sega genesis, sunsoft, super nintendo and posted in christmas, Video Games. You can follow any responses to this entry through the RSS 2.0 feed.
« Dec. 24 – Chucklewood Critters: T’was the Day Before Christmas
Batman: The Animated Series – “Heart of Ice” »