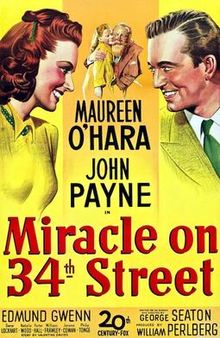 When it comes to the eternal struggle over Christmas, as depicted on South Park, between Jesus and Santa Claus, I always side with Claus. Christmas may have originated with the Pagans before being appropriated by the Christians, but it’s Santa Claus that has made it the most popular holiday in the USA, if not the world. I’m on record as being one who appreciates a good Santa movie, one that adds to the character’s lore and mystique. The Santa Clause, featured towards the back-end of this list, is a modern film that does a pretty good job of making Santa more fleshed out and believable. It owes a lot to Miracle on 34th Street.

Miracle on 34th Street is the original “Do you believe in Santa Claus?” movie and is perfect for those children who are just starting to question the existence of the jolly old elf. It’s also heart-warming and delightful for adults as the film never fails to make me want to believe in Santa Claus once again.

Miracle on 34th Street was released in 1947 during the very festive month of June. Despite the odd timing, the film was warmly received by critics and movie-goers and Miracle on 34th Street is one of the most celebrated Christmas films of all time. Set in New York City, the film follows Doris Walker (Maureen O’Hara) and her daughter Susan (Natalie Wood), two people with little time for sentimentality or flights of fancy. Doris is a divorcee, very straight-laced and career oriented and serves as an event director with Macy’s. Her daughter is her spitting image and the two are really a couple of humbugs around the holidays. Kris Kringle (Edmund Gwenn) comes into their lives when he notices the man set to play Santa Claus in the Macy’s Thanksgiving Day Parade is intoxicated, and insists he be replaced. Since he fits the image of Santa, Doris appoints Kris. He does such a marvelous job that Macy’s hires him as their official Santa to meet children in their 34th Street department store which brings him into frequent contact with Susan. He finds her to be a kind child, but kind of sad and joyless and makes it his mission to convince her that he is, in fact, the real Santa Claus.

Throughout the film we’re treated to scenes between Gwenn and Wood where Wood begins to question all she knows, and all her mother has told her. And as an audience, we’re kept in the dark for the most part as to whether or not Kris really is Santa Claus. Doris is not really interested in hearing about Kris’s exploits, but her suitor Fred (John Payne) becomes one of Kris’s biggest supporters and seems willing to believe that he’s Santa, because he has no reason not to and sees no harm in it.

Kris ends up being a revelation for Macy’s. Even as he tells customers to shop at rival Gimbel’s if Macy’s doesn’t have what they’re looking for or is charging too much. The store manager appears ready to terminate him over the flap, but customers respond with increased loyalty towards Macy’s as a result prompting the store to keep Kris on staff. Meanwhile, Kris is given a task by young Susan to prove he’s the real Santa. He needs to bring her for Christmas a family and a new life by giving her a house. Kris is reluctant to promise her this, as even if he truly is Santa Claus, such a task is impossible, but he reluctantly agrees. Kris and Fred end up forming a duo, in which each will work on the mother and daughter to make them more open to the Christmas spirit.

Concerned by Kris’s proclamations of being Santa, Doris has him psychologically examined and the examination upsets Kris. The psychiatrist finds him to be harmless, but begins spreading his opinion that Kris is mentally ill around the store, which enrages Kris further. Kris foolishly gives the shrink, Sawyer (Porter Hall), a bop on the head with his cane which Sawyer exaggerates into a full-blown assault, getting Kris arrested as a result and faced with being institutionalized over his claims that he’s Santa Claus. 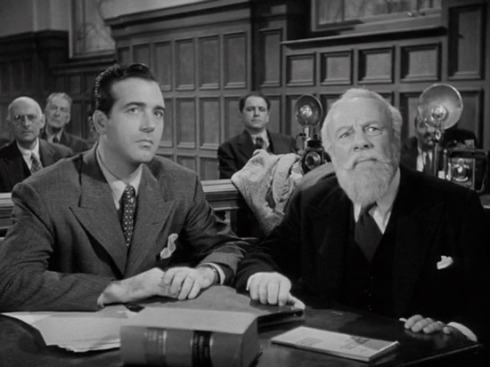 The courtroom scenes contain some of the best writing and most humor in the picture.

The climactic scenes for the film occur in a courthouse, where Fred represents Kris and is forced to prove that he’s Santa Claus, or force the court to prove that he is not. There’s a lot of fun scenes that take place during the trial, and there’s a warmth added to the picture when the store director for Macy’s voices his belief in Kringle on the stand. Through a sort of trick, Fred is able to convince the judge that the federal government recognizes the existence of Santa Claus by virtue of the fact that the post office accepts letters to Santa, which is enough to get Kris off.

The film concludes in typical Christmas fashion, with everything working out for the best and we’re left to wonder if Kris really is Santa Claus. It’s a satisfying wonder though, which captures the essence of the Santa Claus character and whether or not he is believed in.

The film was famously remade in 1994, with Sir Richard Attenborough in the lead role and support from Elizabeth Perkins, Dylan McDermott, and Mara Wilson as Susan. The film changes things up be inserting some villainous characters out to topple Kris, bringing back the character he got fired from playing Santa at the film’s beginning in a scheme to get Kris arrested. It’s a bit cartoonish when compared to the original, but I do like that Kris is given more motivation to strike a man (he accuses Kris of being a pedophile) than what was present in the original. The film ups the difficulty factor for Kris by having Susan request not only a house, but a dad and a baby brother as well. The final scene also opts to use the “In God We Trust” statement on US currency as a way to prove the federal government can acknowledge the existence of a being that no one can prove exists.

The 1994 remake has its good and bad points, but this scene maybe my favorite scene across both films.

The re-make is often derided by those who love the original, as remakes almost always are. I think it works as a modern adaptation. There’s some things I like about it and some I don’t. There’s a little more character development given to smaller roles, and we get a better sense of what the judge has to wrestle with when presented with this case. There’s also a nice communal spirit that’s driven home about the picture, which is present in the original, but to a lesser degree. One change I do like is to one of the best scenes in the original film when Susan witnesses Kris speak Dutch to a young girl. In the remake, the girl is deaf instead and Susan watches Kris sign with her. The scene is just set-up so well, and Attenborough and the young actress playing the deaf child are so expressive and warm that it’s a real heart-melter of a scene.

Whether you watch the original or the 1994 remake, you’re bound to find one of the most sentimental and warm-hearted Christmas films made. Both Gwenn and Attenborough bring amazing authenticity to the character of Kris Kringle, so much so that I don’t know who did it better. I wish Gwenn had the benefit of color for his version as this is a film that is so warm it begs to be scene in color. Miracle on 34th Street, no matter the version, stands as the best Santa Claus movie made, and its use of mystery and cleverness is likely not to be topped by another.