The 12 Films of Christmas #12: The Muppet Christmas Carol 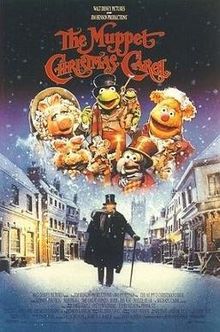 The bare minimum a Christmas television special or film can do to inject some Christmas cheer is to do an adaptation, or parody, of a popular public domain Christmas treasure like Dickens’ A Christmas Carol. In general, these are lazy and trite and form the foundation of the worst holiday dreck imaginable. Just tune into the Hallmark Channel at this time of year to find several variations on familiar stories, all of which bring nothing to the table other than sentimentality. So it is with some trepidation that I include one such work in this 12 Films of Christmas featurette, but hear me out.

The Muppet Christmas Carol starring Michael Caine and those wonderful puppets manages to be a worthwhile endeavor not because it does anything to shake up a familiar story, but because it tells that story with the charm and wit of The Muppets. When it comes to these types of Christmas stories, we likely all have our preferred vehicle of delivery. For me personally, it’s Mickey’s Christmas Carol which is one of my favorite holiday shorts. If I’m going to go feature-length though, I’m likely to turn to The Muppets if I want to hear about old Scrooge.

Caine stars as main character, Ebenezer Scrooge, and his supporting cast is made up of mostly Muppets. Kermit is his foil as the poor, but kind-hearted, Bob Cratchit and Robin stands in for Tiny Tim. That makes Miss Piggy Emily Cratchit, naturally. Stadler and Waldorf play the Marley brothers and are predictably hilarious in their role. Gonzo and Rizzo the rat are used as narrators and exist outside the story, despite occupying a physical presence on screen. They’re the main source of the physical comedy and the film made a star out of Rizzo, a mostly bit part in Muppet films and television specials prior to this. Fozzy, Animal, Beaker, and all of the other familiar gang show-up for spot roles throughout. The Muppets are all playing the role of someone from the original work, but still possess their own personality and character traits. In other words, Fozzy is still Fozzy even if his character is referred to by another name. 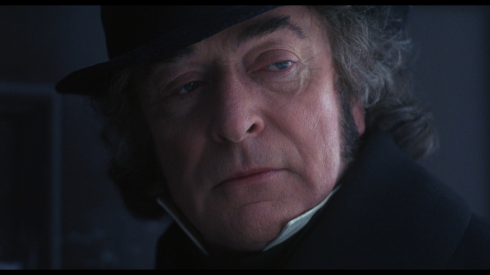 Michael Caine is a natural at playing alongside the Muppets.

Caine is relied upon to carry the picture and act convincingly beside his non-human cast mates. For roles that correlate directly to Scrooge, a human actor is cast so it’s not as unbelievable as it could have been. For instance, Isabelle is played by Meredith Braun and Scrooge’s nephew Fred by Steven Mackintosh. Only Caine is really asked to do any heavy lifting and he’s surprisingly emotive and effective as a Scrooge. There may have been some expectations that a Muppet version of A Christmas Carol would just be a straight comedy, but the film doesn’t shy away from the dramatic moments. In fact, it probably does so to its detriment as the film sometimes spreads the laughs out too far apart. Some plodding occurs during Scrooge’s journey that likely will turn off younger viewers, and even some older ones. The redemptive portion of the film also feels rushed and the audience is denied in savoring Scrooge’s turn at the end. Perhaps this was done to keep the film under a 90 minute runtime, but if that was the goal, then other parts of the film should have been trimmed instead to allow more time for the fun at the end. 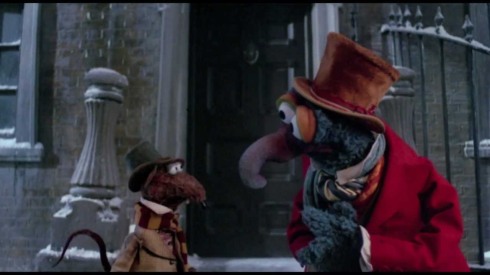 Rizzo and Gonzo are the true show-stealers in this picture as the duo is easily responsible for the most laughs.

From a production standpoint, the film is a true star as the sets, puppets, and costumes all look fantastic. It’s obviously no surprise that a Muppets work would come out looking so well. The production department did a great job in giving the film a true big screen feel when compared with the various TV properties of the Muppets and their made for TV films. The film is in part a musical, like most Muppet productions, and the songs are actually on the light side. I personally consider that a positive, but others may not feel the same way.

In the end, The Muppet Christmas Carol succeeds because it brings its own heart and spunk to a dated work. Other films, like Disney’s A Christmas Carol, just try to retell the same story and possess no charm, and ultimately have no real reason to exist. At least with The Muppets you’re getting that Muppet brand of humor to add a dash of color to A Christmas Carol, ultimately making it worth your time each holiday season.

One response to “The 12 Films of Christmas #12: The Muppet Christmas Carol”