Beavis and Butt-Head Do Christmas

Beavis and Butt-head Do Christmas (1995)

Last year, I posted about the many Christmas specials featured in the animated series South Park. Well, before South Park came Beavis and Butt-head: the subversive, moronic duo who entertained millions during the 1990s on MTV. Created by Mike Judge, who’s now probably more famous for King of the Hill and Office Space, Beavis and Butt-head were basically a rip on the MTV generation. They were dim, violence obsessed, and wasted away their lives in front of the television watching music videos and eating nachos. Despite the fact that the two were clearly presented as losers on their own show, kids liked to emulate them and if the duo approved of a band or video on MTV it offered a credibility boost to said band. Every rock and metal act wanted to be endorsed by Beavis and Butt-head, because it’s what the kids were into at the time. 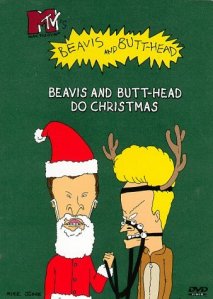 Beavis and Butt-head embrace the holiday spirit. Kind of.

Beavis and Butt-head first debuted with “Frog Baseball” on MTV’s Liquid Television block. It was so successful that it was spun-off into its own show which ran from 1993 until 1997 with a brief one season return in 2011. Along the way there was also a feature-length movie, television specials, and a spin-off called Daria. A few years ago, I made an entry of what I considered essential Christmas viewing and among the many movies and specials was Beavis and Butt-head Do Christmas. Well here’s a full write-up on the special from 1995.

Beavis and Butt-Head Do Christmas refers to two shorts with other holiday content woven in. Do Christmas has been released on DVD and VHS though is likely out of print at this point. The two shorts are parodies of classic Christmas stories/movies that should be obvious just by reading the titles of the two cartoons: “Huh-Huh Humbug” and “It’s a Miserable Life.” First stars Beavis and the second Butt-head and are roughly 12 minutes a piece. This was one of the few episodes of Beavis and Butt-head that didn’t have any music videos (a prior Christmas special for the show featured nothing but the two riffing on Christmas videos) but is still pretty hilarious, nonetheless.

The second cartoon, “It’s a Miserable Life” stars Butt-head, but like the prior one, still features plenty of Beavis too. The twist on this parody is that the guardian angel for Beavis and Butt-head is sent to kill the two after God received numerous requests to make them disappear. The Clarence character here first tries to simply kill the two by freezing a bridge they’re walking on in hopes the two will slip and fall to their deaths. When that fails, he opts to show Butt-head what the world would be like if he never existed and how much better off people would be. Naturally, without Butt-head everyone is a lot happier and more successful. Bevies, in particular, is best friends with the dorky Stuart and volunteers at the soup kitchen on Christmas. After seeing all of this, Butt-head just gets pissed off and he and Beavis just determine that the world sucks, but would suck even more without them. The guardian angel tries to kill them again, but just ends up killing himself by accident.

Once again, the cartoon works by not resorting to any kind of Christmas sentimentality at all. Butt-head is portrayed as a parasite on society who refuses to embrace anything remotely “good.” It’s amusing to see the Butt-head-less world, but it’s more amusing to see Butt-head’s reaction to it. “Huh-Huh-Humbug” is probably my favorite of the two, but they’re both entertaining and pretty much for the same reasons.

Butt-head’s guardian angel isn’t here to help him, he’s here to kill him.

In between the specials we’re also tested to the Ask Santa Butt-head segments and a scene of a burning Yule log that the two riff over in place of music videos. The Santa Butt-head segments feature the duo playing Santa and reindeer, with Butt-head as Santa and Beavis the reindeer. Butt-head reads fan letters, with most of them being from women who want to have carnal relations with Beavis. Butt-head doesn’t understand this and refuses to give Beavis the letters. Since he’s roped up to the sleigh in his reindeer costume, there’s little he can do about it. When a letter-writer requests Butt-head kick Beavis’ ass, he’s happy to oblige by whipping the day-lights out of him. These segments are brief but do bring about a good amount of laughs with the two staying true to their characters even while playing other characters.

Beavis and Butt-head Do Christmas is not your typical holiday special. There’s no holiday cheer, unless you consider any amount of laughter brought on by a Christmas special a form of holiday cheer. It’s mean-spirited, low-brow, but also full of good satire that will make most people who remember the 90’s laugh often and frequently. Beavis and Butt-head are dumb, but the humor really isn’t which some people failed to “get.” I’ve always felt they were underrated in that regard, and perhaps South Park would end up better combining toilet humor with biting satire, but it doesn’t diminish what Mike Judge did with Beavis and Butt-head beforehand.

This entry was posted on Friday, December 19th, 2014 at 4:43 pm and tagged with cartoons, king of the hill, liquid television, mike judge, mtv, south park and posted in Television. You can follow any responses to this entry through the RSS 2.0 feed.
« Home Alone 2: Lost in New York
Christmas Commercialism »

One response to “Beavis and Butt-Head Do Christmas”