The Ghostbusters Get the Lego Treatment

It’s been thirty years since Ghostbusters first hit the big screen ushering in a new era of special effects-laden blockbusters.The film made unlikely heroes out of middle-aged comedians Dan Aykroyd, Bill Murray, and Harold Ramis while lesser known Ernie Hudson got a taste of stardom. The film was immensely successful and soon a cartoon was spun-off from its success which lead to even more opportunities for merchandise. Lots and lots of merchandise.
Ghostbusters is one of those rare franchises that has a lot of appeal for both kids and adults. Many have tried to achieve the same thing, but aside from those that can lean heavily on nostalgia, most fail to achieve the same level of success. The adults had the films, which kids enjoyed as well, while the cartoon was aimed directly at adolescents. The personalities of the main characters were unique to whatever version was being watched with only the broader traits (such as Egon being the brainy Ghostbuster) carrying over.
I was introduced to the Ghostbusters via the cartoon, and as a child, probably assumed it came first. When Ghostbusters 2 arrived in theaters it was a pretty big deal. I liked the films, though my assortment of toys were obviously born from the cartoon. I can recall having at least three of the Ecto vehicles, the firehouse, and numerous action figures. I also remember a Transformers-inspired Volkswagon Beetle that turned into a grasshopper. Sadly, once the Teenage Mutant Ninja Turtles arrived the Ghostbusters began to lose the battle for my attention, and my parents’ money. Most, if not all, of those old toys have been either sold, given away, or tossed, though my love for the original film (and to a lesser extant, its sequel) still exists. 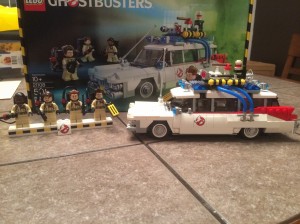 This weekend, Ghostbusters is back in theaters for those who wish to see it on the big screen. If the lure of the theater isn’t your cup of tea, then might I suggest celebrating 30 years of ghost-busting goodness with Lego?
Earlier this year, as part of the 30 year anniversary celebration, Lego released the infamous Ecto-1 in Lego form along with mini figures of the four Ghostbusters: Peter, Ray, Egon, and Winston. The set was the result of a fan vote on sets created by avid Lego builders. A firehouse was part of the original fan-set, but sadly Lego passed (with no indication the franchise would be revisited, but who knows?). The Ecto-1 is a solid overall set for Lego collectors and Ghostbusters fans. Its external likeness is nearly spot-on and likely only the most avid Ghostbusters fans can spot any shortcomings. This set is obviously of the Ecto-1 vehicle from the first film, and not the more flashy edition from Ghostbusters 2. It took me a full evening to assemble, and once completed I was more than satisfied with the end result.
The fours figures feature a reasonable likeness to the characters they’re meant to resemble. Lego figures are rather limited in what they can do, but little touches such as the lines on Venkman’s face and Egon’s hair do a solid job of giving these figures some character. I would have preferred to see Lego attempt a receding hairline on Pete, and Winston looks more like Billy Dee Williams than Ernie Hudson, but oh well. Their proton packs are a combination of several Lego pieces and have to be assembled. The end result looks pretty good and Lego’s approach proved accurate. The trap, on the other hand, is just so-so but clearly Lego didn’t want to spend extra cash on creating a unique piece of plastic for one lone set. There’s also a build-able stand to display the figures which is a nice touch considering the majority of those who purchase this will likely be adult collectors.

The fab four ready for some bustin’!

When it comes to the actual vehicle in the set, Lego surprises with numerous unique pieces. This means no stickers, which is always a welcomed trait for a Lego set. The doors for the Ecto-1 all have printed Ghostbuster logos on them and even the license plates are sticker-free. The general shape of the Ecto-1 is captured quite well, and the mass of junk on top seems accurate enough. There’s a hose piece that’s a little odd, but it was on the original so it’s here as well! There’s really very little to nitpick here as even the rear wheels are covered by the frame of the vehicle. The only real issue with the car is the scale. It’s slightly under scale to the figures and can only hold three figures, seated single file, at a time. Since most are likely to display the characters on their stand, this isn’t that big of an issue and probably the right move. A vehicle that could actually hold all four figures may have ended up being out of scale for the opposite reason.
All in all, this is a great little set. It will set you back around fifty bucks which is pretty much on par for similar Lego collections, though may be just a tad too pricey for impulse buyers. For those that want to see their beloved Ghostbusters in Lego form, this is damn near perfect. Hopefully Lego reconsiders and comes thru with a firehouse (that’s to scale with the Ecto-1) so I can finally replace the toy one I sold at a yard sale so long ago.

This entry was posted on Saturday, August 30th, 2014 at 2:57 pm and tagged with bill murray, Dan Aykroyd, Ernie Hudson, Ghostbusters, Harold Ramis, lego, toys and posted in Film. You can follow any responses to this entry through the RSS 2.0 feed.
« Final Fantasy X HD Remaster
Teenage Mutant Ninja Turtles – NES »

One response to “The Ghostbusters Get the Lego Treatment”