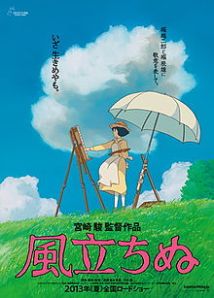 “The wind is rising!  We must try to live!” – Paul Valéry

The above quote opens the latest release from Studio Ghibli and director Hayao Miyazaki; The Wind Rises.  It’s a quote that is suitable for the film as it implies that change is coming, but we must carry on.  The Wind Rises is to be the last directorial effort from Miyazaki, Japan’s most celebrated director of animated films, and it is an appropriate piece for him to go out on.  The Wind Rises tells the tale of Jiro Horikoshi and his dream to design what he calls beautiful airplanes.  Jiro is based on the airplane designer of the same name who is famous for creating Japan’s Mitsubishi A5M and A6M Zero and the basis for the film was derived from a quote he once gave:  “All I wanted to do was make something beautiful.”  The film has two sides to it with one being a mostly faithful account of Horikoshi’s challenge in developing his first successful airplane and the entirely fictional account of his personal life.  The end result is a tale of hope, triumph, love and life and is perhaps Miyazaki’s finest piece since My Neighbor Totoro.

The film opens with a young Jiro dreaming of flying a plane.  The opening sequence is perhaps the most fun for the animators as Jiro’s dreams are filled with nightmare creatures seemingly stemming from his despondence over his imperfect vision.  The character admits early on to himself that he will never fly because of his eyes, but in a dream meets with Italian airplane designer Giovanni Caprone, who will be a recurring visitor amongst Jiro’s dreams throughout the film offering him guidance on how to be a great engineer.  It’s these dreams that inspire Jiro to be an airplane engineer and the film advances time to show us his journey to become an engineer.

Jiro leading one of his designs to the testing grounds.

Jiro is portrayed as a sweet and good-natured man.  He is willing to help those in need, and a chance encounter with a young woman and her maid on a train plays a pivotal role in the film later on.  During the train ride the great earthquake of 1923 strikes and Jiro carries the maid to safety after she breaks a leg.  He seeks nothing in return and doesn’t even share his name with the women before departing.

Jiro lands a job out of school and his employment takes him to Germany where he is introduced to pre World War 2 Germany’s policies.  Being Japanese, he is not trusted by the soldiers as he seeks to learn about Germany’s engineering when it comes to aeronautical design.  Despite this, he is able to learn some techniques and apply them to a new aircraft, which unfortunately crashes during the test run.  To clear his head, his company sends him on a retreat for some rest and relaxation which is where he encounters the young woman he met years earlier on the train, Naoko.  The two fall in love, and though it seems predictable, their scenes are handled with such tenderness and care that the audience is left to root for them, even if it seems as if they’re destined to fall for each other.  Jiro learns there is a dark side to his budding romance as Naoko is afflicted with tuberculosis.  This forces them to move quickly with their life together.  Naoko insists on getting better before discussing marriage, but in time relents once Jiro has to leave for work.

Jiro must deal with failure throughout the film.

The last act of the movie involves Jiro and his attempt to finally build a worthy aircraft that his company can sell to the Japanese military, while Naoko wages a silent battle at their home with her illness.  I don’t want to get into too much detail about the film’s plot, but suffice to say it’s a bittersweet tale that includes ups and downs with the story refusing to linger on anything for too long.  In that, it mirrors life which is a constant push and pull.  There are many themes the film likes to go back to.  Early on a supporting character mentions the importance of having a family to go home to, crediting it with helping a man work harder at the office, which is shown later in the film once Jiro is married.  In his dreams, Caproni asks Jiro if he prefers to live in a world with pyramids, or with no pyramids, using this as an explanation for why he would design airplanes that will eventually be used for war.  And all throughout the film, the wind acts as a character itself playing a pivotal role in one of the film’s final scenes.

As this is a work from Studio Ghibli, it hardly needs stating but deserves to be anyways, that this film is gorgeous.  The animation is predominantly hand-drawn, but some computer generated imagery is used for some of the film’s effects.  The film has a bright palette though Jiro is often garbed in white, gray, or a very light lavender, which serves to isolate him from his surroundings.  This suits the character as he is often oblivious to his surroundings, so consumed in his work and willing to overlook the fact that his designs are made for war.  The country-side settings are sure to evoke memories of Totoro, and the film’s whimsical feel and care-free pace further serves to draw comparisons to Miyazaki’s old masterpiece.

The wind is a character of its own, its actions often directly influencing the lives of the human characters in the film.

The sound design is excellent, with great use of natural sounding effects and an excellent score from Joe Hisaishi.  The english dub was handled by Disney and the film distributed in North America on their Touschstone label.  The dub is the usual high quality that viewers have come to expect from Disney as the company has handled the majority of Studio Ghibli’s dubs.  Serving as Jiro is Joseph Gordon-Levitt with supporting roles from the likes of Emily Blunt, John Krasinski, and Martin Short, the latter serving as the scene-stealing character Kurokawa, Jiro’s boss throughout the film.

The Wind Rises may be an animated movie, but it’s not for children.  The film’s pace is too slow and plot is too mature to entertain most children.  The film is best described as a drama and should appeal to older fans of Miyazaki’s works.  That said, it’s a wonderful piece of film with fantastic visuals, a compelling plot, and terrific performances.  Hayao Miyazaki may never get the recognition he deserves from international audiences, but anyone involved with film appreciates and respects the work he does.  It’s both wonderful and sad that this movie exists, knowing it is to be the last written and directed by Miyazaki, but in that sense it mirrors the film superbly.  What a truly awesome way to cap off a career!

This entry was posted on Sunday, March 2nd, 2014 at 12:40 pm and tagged with animation, anime, caproni, disney, hayao miyazaki, jiro horikoshi, John Krasinski, Joseph Gordon-Levitt, Martin Short, studio ghibli, totoro, touchstone and posted in Film. You can follow any responses to this entry through the RSS 2.0 feed.
« The Legend of Zelda: A Link Between Worlds
A Week With the WWE Network »